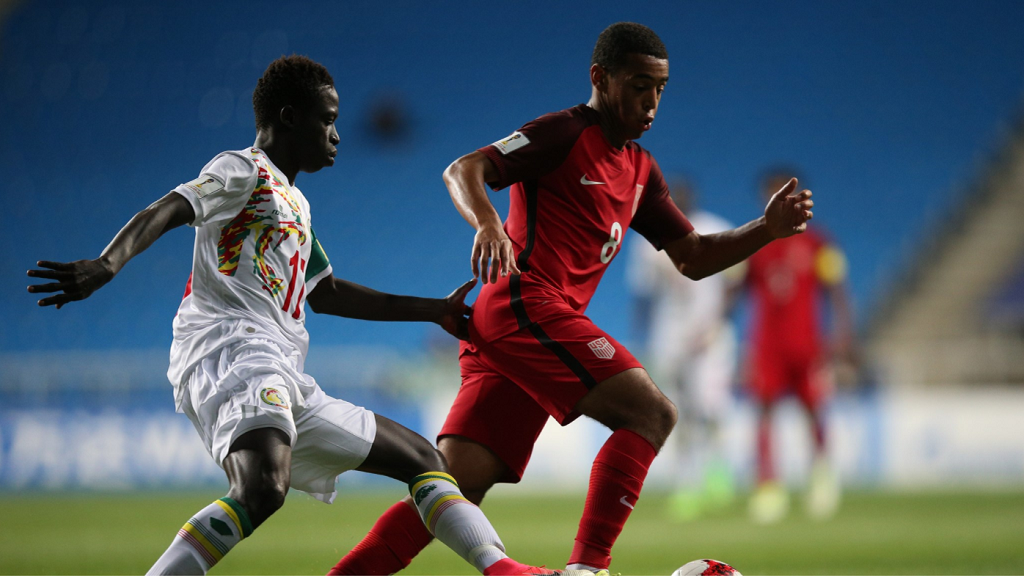 Over his two seasons in the USL with the New York Red Bulls II, and now in Major League Soccer for the Red Bulls, the engine and smart pressure Tyler Adams brings to the field has drawn consistent praise.

Adams proved the lynchpin for the United States U20 National Team in a performance designed to take Senegal out of its rhythm on Thursday. Adams and the U.S. earned a 1-0 victory against the African side at the 2017 FIFA U20 World Cup at Incheon Stadium to move to the top of Group F entering the final round of games on Sunday.

“We knew that if we pressed them it would give them a hard time, and that created a lot of chances for us in the opposing half of the field,” said Adams post-game. “I think Josh [Sargent], Luca [de la Torre] and myself capitalized on those opportunities and tried to move forward as quickly as possible.”

Adams was the centerpiece of the pressure the U.S. applied, closing down the ball quickly to recover possession when possible alongside fellow midfielders Eryk Williamson and fellow USL alum Derrick Jones (Bethlehem Steel FC). The pressure created numerous first-half chances as the U.S. took the lead in the 34th minute through Sargent, and limited Senegal’s chances to get onto the front foot.

“We thought if we can keep the game in their side of the field and we can keep them away from being comfortable playing, and they have to chase us, what’s that going to look like?” said U.S. Head Coach Tab Ramos. “I thought in the first half we did, and I think we surprised them.”

Adams’ touch in addition to his engine was also in evidence, particularly on the U.S. goal. His deft touch released Luca de la Torre into the right side of the penalty on a narrow run that took him just past Adams and his marker, and the Fulham midfielder’s cut-back cross was controlled perfectly on the turn by Sargent for a decisive finish.

Sargent – the captain of the U.S. U17s before getting called into the U20 squad for the World Cup – has impressed everyone with his performance so far. With three goals in two games, the St. Louis, Mo. native is becoming one of the breakout stars of the tournament so far.

“First off, he’s a big talent,” Adams said of Sargent. “He has the confidence there, and I try to keep instilling him with confidence, and obviously it’s paying off. He’s clinical in front of the goal, and he just battles out there. He’s resilient, and I think that’s helped us a lot. If he can keep going, I think we can have a great run.”

The U.S. is now in position to finish at the top of Group F with a victory on Sunday morning against Saudi Arabia, which took a surprise 2-1 win against Ecuador in the group’s second match day. Heading to Daejon for the first time after its first two games in Incheon, Adams said the team is ready for what Sunday will bring.

“On two days rest and traveling, we have to stay focused and prepared as much as possible,” said Adams. “With our technical staff we know that we’re going to be prepared, watch video, regenerate, and be ready for the next game, because it’s a must-win game as well.”