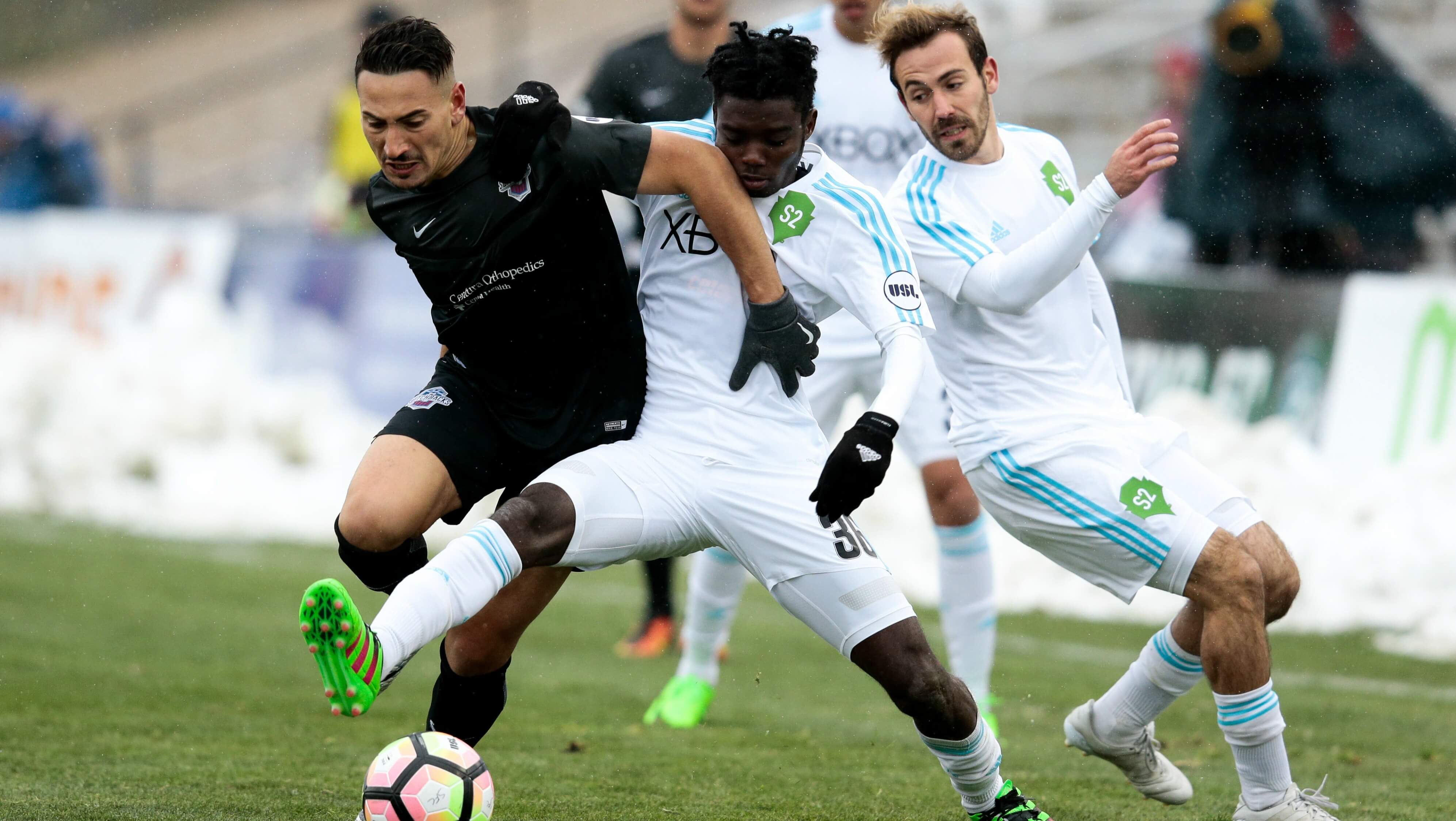 COLORADO SPRINGS, Colo. – A pair of second-half goals by Felix Chenkam handed Seattle Sounders 2 a 3-2 victory against Colorado Springs Switchbacks FC at Weidner Field on Saturday. S2 played a majority of Saturday’s match with a one-man advantage, as Switchbacks defender Pascal Eboussi was shown a red card in the 18th minute. Seattle took the initial lead soon after, with Irvin Parra netting from the penalty spot after center official Victor Rivas whistled for a handball in the box. The Switchbacks battled back, with Ricardo Perez scoring a goal to tie the game before halftime and Jordan Burt netting a goal in the second half, but Cameroon Under-20 international Chenkam provided two quality goals to secure the result for S2. While the Switchbacks move to 2-2-3 (9 points), Seattle improves to 3-4-0 (9 points).

1. While Felix Chenkam battled injuries during the match, the 18-year-old turned in a strong performance and proved to be the difference. Chenkam, who played in the 2017 Africa U-20 Cup of Nations during February and March, netted two strikes from distance to give S2 all three points. The S2 forward hit a low left-footed effort by a diving Moise Pouaty for his first of the night. Three minutes later, he fired in a shot from well outside the box for his second.

2. The Switchbacks played most of the game with a one-man disadvantage following Pascal Eboussi’s red card in the 18th minute, but the home side did not look disadvantaged during long stretches of the match. Ricardo Perez, who had a strong first half moving forward, scored a goal to tie the game in the 40th minute. Perez blasted a shot towards goal, and a deflection saw the ball sail by the outstretched fingertips of S2 goalkeeper Tyler Miller. Seattle’s Chenkam put the away side up two, but the Switchbacks continued to fight. A brilliant backheel by Kevaughn Frater set up Jordan Bart, who blasted in the Switchbacks’ second of the evening. Colorado Springs had a few more opportunities following Bart’s 70th-minute strike, but S2 held on for the points.

3. The Switchbacks were determined to come away from Saturday’s match with at least one point, but Seattle netminder Miller made a spectacular save late in the match to help his side earn three points. The defining moment of the game came in the 91st minute. With only a few minutes left to play, Switchbacks forward Frater had the ball at his feet in the box and blasted a low shot on frame. Miller was there, though, to record his biggest save of the night.

USLSoccer.com Man of the Match:
Felix Chenkam, Seattle Sounders 2 – The forward burst onto the scene in the second half, scoring two goals to lead S2 to victory.