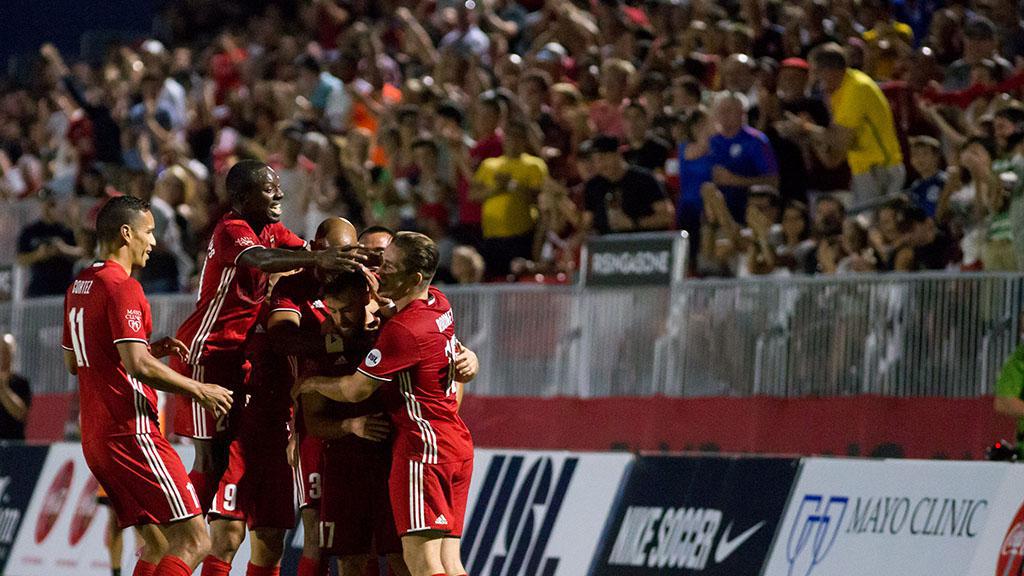 The USL recorded its highest-attended week in league history as fans viewed a remarkable weekend of action that saw honors end even in a pair of Derby contests, two big road victories leave San Antonio FC and the Charleston Battery sitting on top of their respective conferences and another banner night for Phoenix Rising FC.

1. THROUGH THE GATES: A USL-record 94,700 fans attended games during Week 5 of the season, continuing to drive the league’s rise in attendance over the past two seasons in strong fashion. Another crowd of more than 20,000 fans in Cincinnati led the way, but excellent turnouts elsewhere – including a club-record 7,162 in Phoenix and 6,502 at Ottawa Fury FC's inaugural USL home opener – saw a compelling week of action that included the league surpassing 200 goals for the year.

2. RISING HIGHER: The 200th goal of the season was scored by the Swope Park Rangers’ Kevin Oliveira, who almost sparked an unlikely comeback late on Sunday night only for the Rangers’ perfect start to the season come to an end against Phoenix Rising FC as the host’s 4-3 win capped a memorable night at the Phoenix Rising Soccer Complex. Having introduced new signing Didier Drogba prior to the contest, Phoenix then ripped into Swope Park’s normally reliable defense for three goals in six minutes midway through the first half to take control of the game. An early second-half finish by Peter Ramage increased the lead, but it turned out to be an essential finish as the Rangers roared back, only for their comeback to finish one goal short.

3. FAMILIAR FACE: The second edition of the River Cities Derby – and first matchup of this year’s series – was anticipated to be an intense clash, and it proved exactly that as FC Cincinnati and Louisville City FC played to a 1-1 draw at Nippert Stadium in front of 20,473 fans. After his offseason move north to Cincinnati, there was a certain sense of inevitability that former Louisville midfielder Aodhan Quinn would play a major role in the clash, and it ended up proving the case as his opportunistic finish earned FCC a point with 11 minutes to go. Quinn was subdued after the goal, he said out of respect for his former teammates and club, but with the heat that came from the clash it will be interesting to see what sort of reception awaits in July when the rivalry is renewed at Slugger Field.

RELATED: Cincinnati Buoyed by Crowd of 20,437 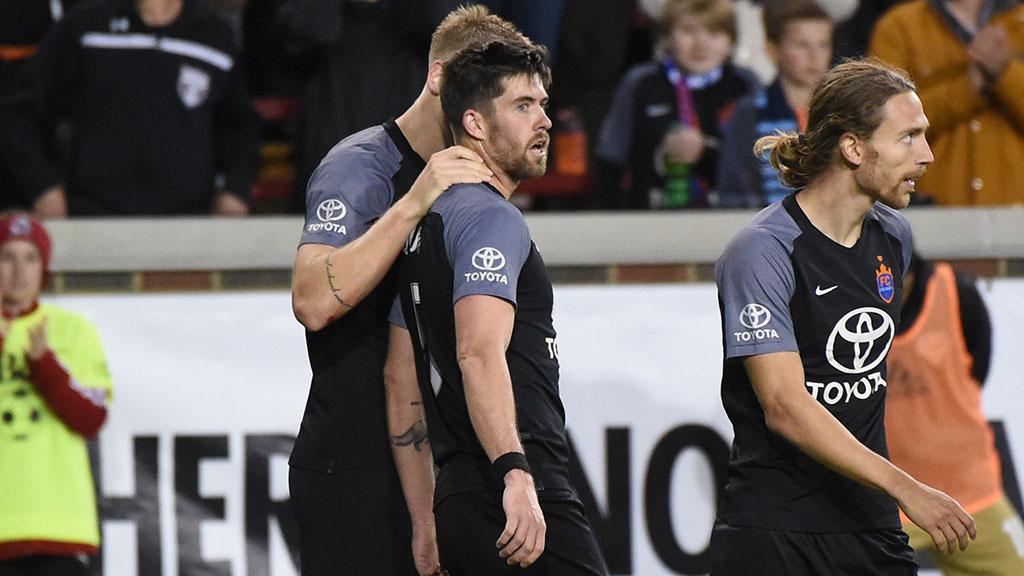 4. CANNON BLAST: Given the star power elsewhere in the Eastern Conference, the Charleston Battery might not quickly come to mind when it came to preseason talk of leading contenders, but with a 3-2 victory against the Tampa Bay Rowdies – their fourth in five games to start the season – it’s once again looking like you should discount the veteran side at your peril. With a strong core of players that know each other extremely well, Charleston earned a big victory on the road as both the Battery and the Rowdies went for the three points late on in a thrilling contest. Brian Tah Anunga’s first goal for the club proved the difference, giving his side a big boost as it returns to MUSC Health Stadium this week.

5. ONE DOWN, TWO TO GO: Another team that took a big road win over the weekend was San Antonio FC, which cemented its place at the top of the Western Conference with a 2-1 win against a Vancouver Whitecaps FC 2 side that had won two in a row going into Saturday’s contest. The victory was the first game of a three-game swing through Cascadia for San Antonio that continues on Tuesday night against Seattle. With Billy Forbes again finding the score sheet, and also setting up the opener for Aly Hassan, SAFC is looking in solid shape to return home with more points in the bag.

6. CLOSE, BUT NO CIGAR: The New York Red Bulls II and Reno 1868 FC didn’t have much in common going into this weekend’s contest, but they would certainly recognize the feeling the other was having after big victories for both were grabbed away in the final seconds. For 1868 FC, the first win in club history was within touching distance as it led Colorado Springs Switchbacks FC going into stoppage time, only for Shane Malcolm’s goal for the Switchbacks to put the celebrations on hold at Greater Nevada Field. The Red Bulls II, meanwhile, had a chance to earn their first regular-season win against the Rochester Rhinos with a lead late in stoppage time, but Joe Farrell’s header from a free kick as he beat Evan Louro to the ball saw the Rhinos end their home opener at Capelli Sport Stadium with a major boost, and denied New York a victory it would certainly have been pleased with. 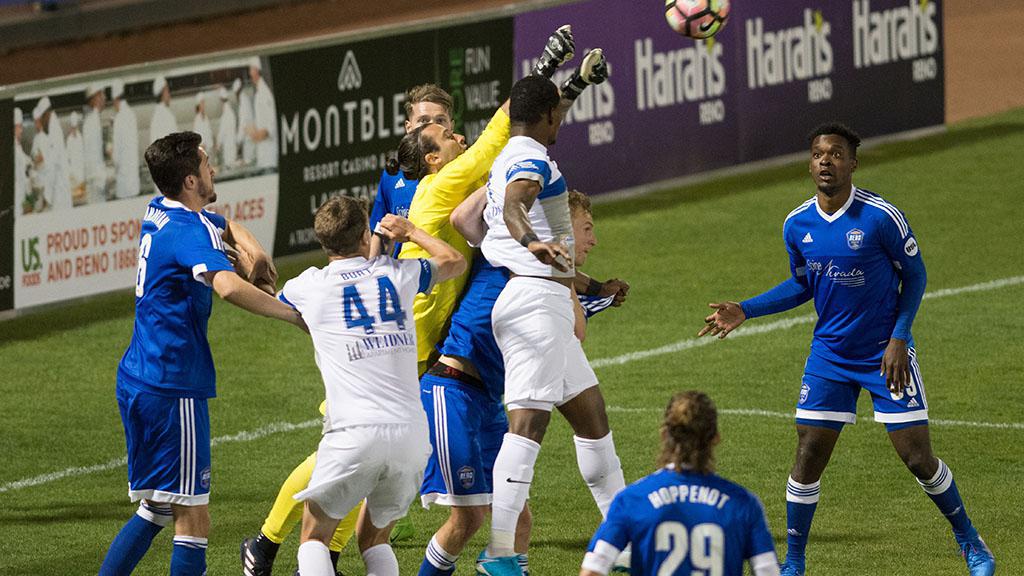 7. MIGHTY MARTINEZ: One team that was able to get over the hill this weekend was the Charlotte Independence, as Enzo Martinez looked back to his All-League form in notching both goals in a 2-1 victory against Saint Louis FC on the road at Toyota Stadium – Saint Louis. Martinez was the central figure in the Independence’s run to a first postseason berth last season, earning nomination for the USL Most Valuable Player award in the process. Playing in a more advanced role this season – only nine of his touches came in the Independence’s half against Saint Louis – Martinez clicking into gear in front of goal will be a welcome sight for all of Charlotte’s supporters.

8. MONARCHS BATTLE THROUGH: With the offseason additions the club made, a boost in performance from Real Monarchs SLC was expected, but it’s unlikely many saw the club sitting in second place after four wins out of five to start the new season. A 3-1 win against Seattle Sounders FC 2 on Saturday night at Starfire Stadium saw goals by Jose Hernandez and Nick Besler six minutes apart allow the Monarchs to break open a tightly-fought game and secure another strong victory. Tied with Charleston for the most goals in the league this season with 13, the new faces are providing just the impetus that was hoped for.

9. OFF THE SLIDE: After five one-goal defeats to start the season, the Portland Timbers 2 were due a night where things went their way. It finally arrived on Saturday night when T2 earned a 2-0 victory against Sacramento Republic FC in front of 11,569 fans at Papa Murphy’s Park as goals by Villyan Bijev and Victor Arboleda gave the visitors a vital win. That the victory came against Sacramento shouldn’t necessarily have come as a surprise, either. T2 has been somewhat of a thorn in Republic FC’s side since the two teams first met in 2015 after having previously been partners, and Portland’s win on Saturday evened the all-time series between the two at three wins apiece. 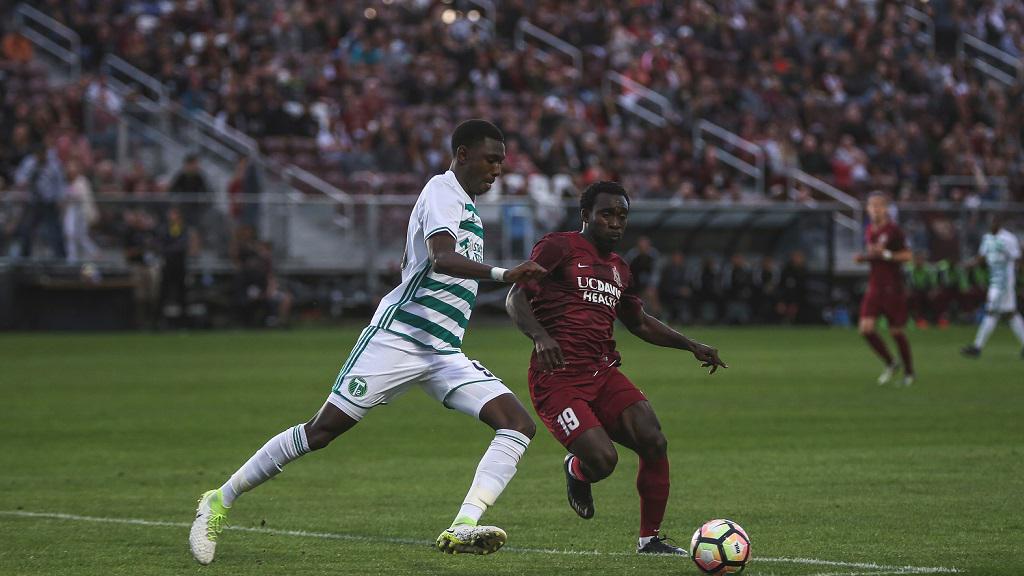 10. ROUGHNECKS RIDE: There has been a sense of optimism that things are different in Tulsa this season ever since the start of the new season, and with a 1-0 victory for the Roughnecks on Saturday on the road against Rio Grande Valley FC in front of more than 6,000 fans at H-E-B Park, that feeling only increased. What made the Roughnecks’ victory all the more impressive was the way they were able to take the game to the Toros on their home turf. With RGVFC having won each of its past two outings, and looking for some revenge after Tulsa’s win at ONEOK Field earlier in the season, getting out of South Texas with a point would have been good. With three in the bag, there is a chance this side could be a playoff contender.

11. ONE FOR THE ROAD: One month into the season is probably a bit too early to be looking at playoff standings, but Orlando City B’s 2-0 victory against Bethlehem Steel FC at Goodman Stadium on Sunday could be a valuable one for the side that has been the busiest so far this season. Orlando has already played eight games, more than any other team in the league, and will be back in action on Thursday night against Saint Louis. Thanks to a near-perfect performance by Richie Laryea – who bagged both goals and went a perfect 18-of-18 with his passes – OCB kept itself in the top eight ahead of those who will have the opportunity to play catch-up over coming months.