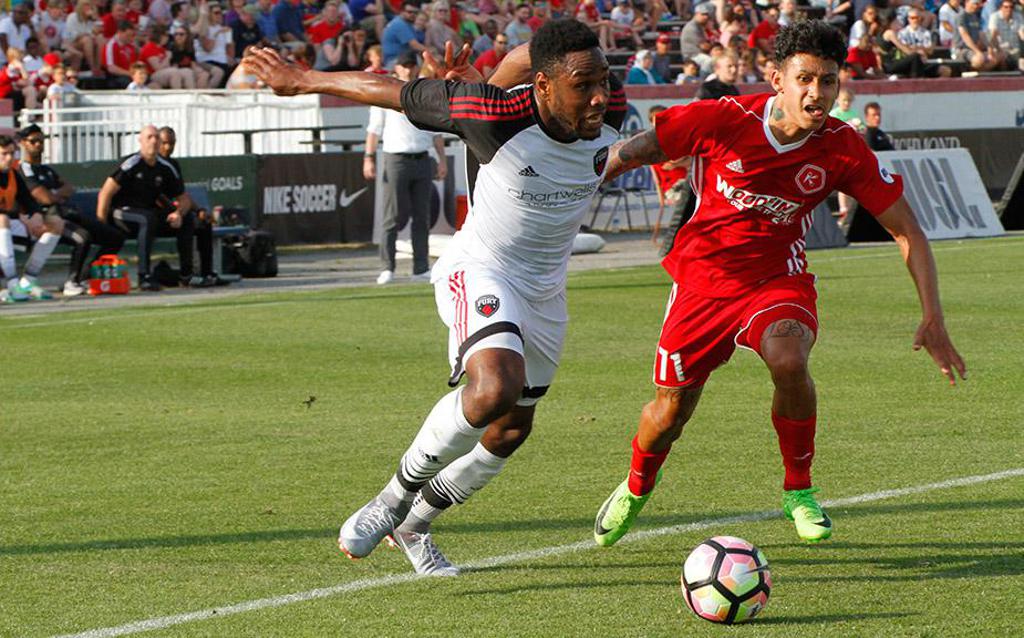 RICHMOND, Va. – In a USL season that just four weeks in has already seen its fair share of memorable strikes, Ottawa Fury FC’s Steevan Dos Santos threw his hat into the ring for Goal of the Year against the Richmond Kickers on Saturday night at City Stadium.

With the game scoreless as time wound down, a clearance to the center circle came to Fury FC’s Tucker Hume. His header redirected the ball toward the Cape Verde forward, who fired on the volley from the halfway line, looping a shot over Kickers goalkeeper Matt Turner as it took one bounce before hitting the back of the net.

The goal, remarkable on its own, also had the added bonus of earning Ottawa its first win in the club’s USL era.

"It's hard to win games on the road in this league as we found out so we'll take the victory any way we can, but that goal from Steevan was sensational,” said Fury FC Head Coach Paul Dalglish. “To win games on the road your goalkeeper needs to make big saves and I thought Callum [Irving] was outstanding. If you want to be a playoff team in this league you have to grind out results on the road and win your home games, and I thought it was a perfect away performance from us tonight.”

With the wind at their backs in the first half, Richmond had come close to finding the net on numerous occasions before the break, holding a 10-2 shots advantage on their visitors. A pair of saves by goalkeeper Callum Irving and a shot off the left post by former Fury FC forward Oliver left the game scoreless at halftime, though, and Dos Santos’ finish left the Kickers on the wrong end of a third consecutive 1-0 defeat.

“[Dos Santos] hit it perfectly and I knew it was in as soon as he hit it, to be honest,” said Kickers Head Coach Leigh Cowlishaw. “Certainly not Matt’s fault, it was nobody’s fault other that really getting around the second ball.  When you have a freak goal like that, opportunistic goals, you just have to move on.”

The victory is a major boost for Ottawa, which fell both Saint Louis and Tampa Bay to open its inaugural season in the USL. Returning to TD Place next Saturday for its home opener against Toronto FC II, Fury FC will now have an added spring in its step as prepares to perform for its home fans for the first time this year.

"We needed that win, and hopefully we can all relax a little bit now and put that first one behind us and play the brand of football we want to play,” said Dalglish. “We are really pleased and we will enjoy every moment of this win and hopefully it will give us confidence in our home opener next weekend."