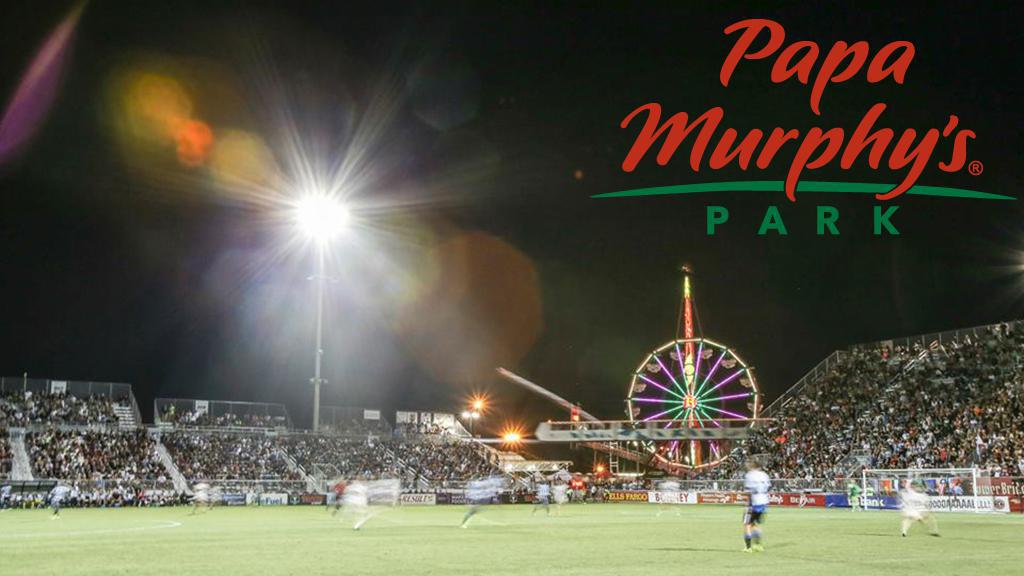 SACRAMENTO, Calif. – Sacramento Republic FC announced Thursday the naming of its facility and home pitch as Papa Murphy’s Park. This marks the start of a multi-year partnership between Republic FC and the well-known pizza chain.

“We are thrilled to partner with Papa Murphy’s, a brand that is synonymous with families, quality and community,” Republic FC President and Co-Founder Warren Smith said. “Just as soccer and pizza gather people together, so does Papa Murphy’s Park. Our home pitch has always been an intimidating place for opponents and that will continue under the banner of Papa Murphy’s.”

Formerly known as the Bonney Field, Papa Murphy’s Park is a privately-funded facility and private-public collaboration among Comcast Spectacor, Republic FC and Cal Expo. It opened in June 2014 with a capacity of 8,000 seats and later expanded in 2015 to its current capacity. The facility holds more than 11,500 for sporting events and as high as 14,000 for concerts.

Papa Murphy’s Park has served as one of the most-attended venues in the USL, having sold out all but one regular-season match since Republic FC’s 2014 debut.

Located on the grounds of Cal Expo, Papa Murphy’s Park provides one of the largest grass pitches in the country for a professional soccer club and was the site of the 2014 USL Cup Final. The pitch has also hosted the likes of international clubs Chivas de Guadalajara, Atlas FC, Newcastle United FC, Sunderland AFC, West Bromwich Albion FC, Rangers FC and Liverpool FC U21.

“This is an incredible opportunity to partner with a growing sports enterprise that has huge potential for our brand and fits wonderfully into the Greater Sacramento area,” said Papa Murphy’s Co-op President Greg Wellington. “Republic FC couldn’t be a better partnership and we are looking forward to activating it on various levels over the coming years.”

The multi-year naming rights arrangement will consist of a variety of marketing elements beyond the naming of Papa Murphy’s Park. Papa Murphy’s will be featured on various marketing materials, advertising in broadcasts, signage at the site and in a series of promotions and events. In alignment with their core values and commitment to the Sacramento region, Papa Murphy’s and Republic FC will also be engaging in a variety of community activities that include but are not limited to underserved youth and families.