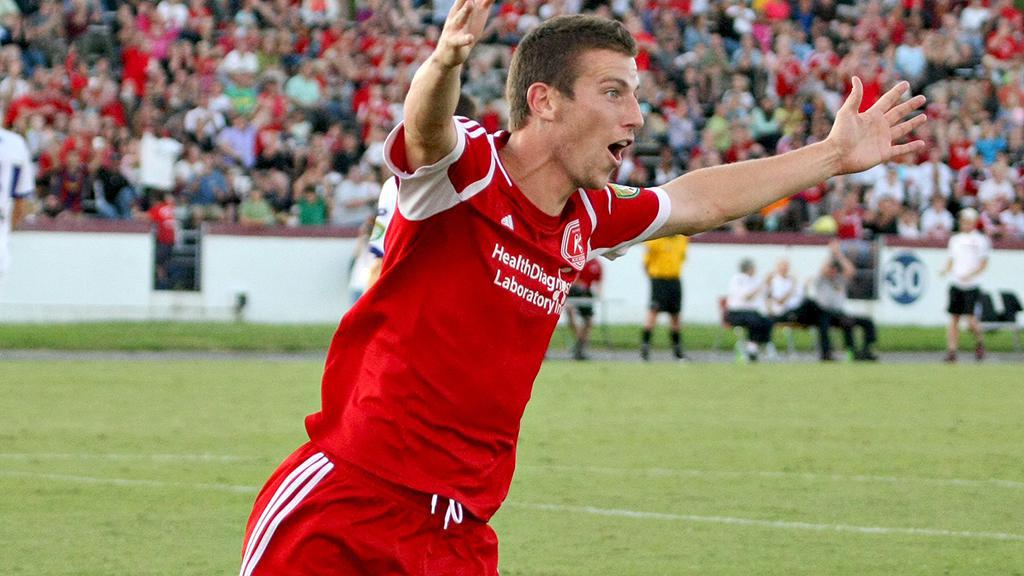 “A sincere thank you to the Richmond Kickers organization for allowing me to pursue my passion,” said Delicâte. “Having been a part of the Kickers family for over 10 years, it has been a privilege to be involved with a top club. A huge thank you to all of my teammates throughout the years. I have met a lot of wonderful people and built many great friendships.”

“I also would like to extend my appreciation to all of the Richmond fans, especially the River City Red Army, which brings such an exciting atmosphere to City Stadium,” he continued. “Having your tremendous support on and off the field makes a significant impact that we, as players, value very much.”

“Deli has accomplished so much during his career and especially while playing for the Kickers,” said Leigh Cowlishaw, Richmond Kickers Director of Soccer. “Championships, All-League Selections, Leading Goalscorer Awards. Simply put he's the most prolific goal scorer in Kickers history and we wish him all the best in the next chapter of his life.”

Consistently one of the top goal scorers in the league since his professional debut in 2004, Delicâte eclipsed the club’s all-time scoring record in 2012, posting a career-high 16 goals that season. He reached the century mark in career goals when he notched his 100th tally on June 18, 2014 against the New England Revolution in the U.S. Open Cup Fourth Round at City Stadium. Adding 21 assists in a Kickers' uniform, the four-time USL All-League First Time honoree and 2014 USL Most Valuable Player Finalist also owns the club record for career points (209) over 10 seasons in Richmond.

After a three-year stint with the Rochester Rhinos (2006-2008), where he contributed 19 goals and seven assists, the native of Kent, England returned to Richmond in 2009 and led the club to back-to-back Championship appearances.

Most recently, he overcame a cancer scare and extensive kidney surgery that sidelined him for four months, returning to the field during the club’s 1-0 win over Orlando City B on August 27 to conclude his career with 249 appearances for the Kickers.

“I am saddened to know I will not be gearing up for another preseason, but I am excited for what lies ahead as I close this chapter of my life,” added Delicâte. “I have been so fortunate to play the game I love for so many years and I look forward to seeing how the league and club continues to grow.”

The 2003 Virginia State and CAA Player of the Year, Delicâte accumulated 44 goals and 13 assists over four seasons at Virginia Commonwealth University. His 39 points in 2003 rank third in school single-season history and he is the first player to reach the century mark in career points (101). Leading VCU to CAA Championships in 2002 and 2003, he was named Tournament MVP on both occasions, also earning First Team All-South Atlantic Region and NSCAA and College Soccer News Second Team All-America honors. He was recently inducted into the Hall of Fame on February 11, 2017.