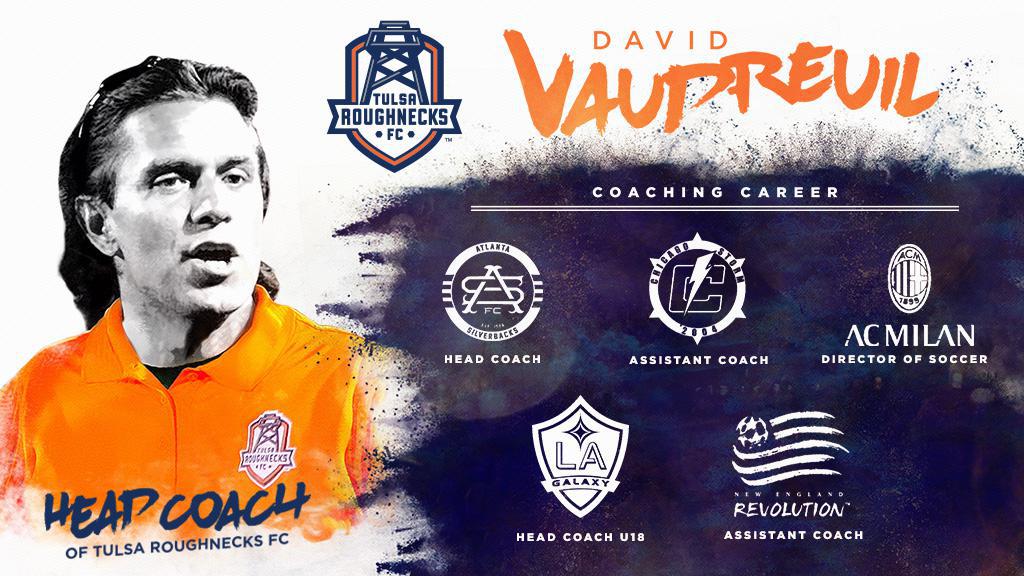 "I am honored to be named Head Coach of the Tulsa Roughnecks, one of the iconic brands in American soccer history,” said Vaudreuil. “I look forward to working with Technical Director David Irving and club management to build a team that will capture the hearts of the Tulsa community and compete for championships in the USL and the US Open Cup.”

Vaudreuil brings a wealth of connections and contacts throughout the game to the Roughnecks thanks to a substantial amount of playing and coaching experience. The former defender and midfielder played several seasons in Major League Soccer with D.C. United, the Colorado Rapids and the Chicago Fire. He appeared in 131 MLS matches from 1996 through 2002.

After his playing days, Vaudreuil moved into coaching and has served in a number of roles, including a stint as head coach with the Atlanta Silverbacks in the old USL First Division. Other coaching stints have included time as an assistant coach to Jay Heaps with the New England Revolution in MLS and as the General Manager and Head Coach of the AC Milan USA Academy.

Vaudreuil also spent time under new USA National Team Coach Bruce Arena when he served as the head coach of the Los Angeles Galaxy U-18 squad. In addition, he also played for Arena at D.C. United when the club won its first two MLS Cup titles.

More recently, he helped engineer a successful turnaround with Head Coach Gerard Nus at Rayo OKC, as the side finished the regular season on a 10-match unbeaten run that included a five-match winning streak to end the campaign and earn a place in the postseason.

“We are ecstatic to have David Vaudreuil join our organization as Head Coach,” said Tulsa Roughnecks FC Vice President Brian Carroll. “David’s network of contacts throughout North America is substantial, and it is exciting to see some of the relationships that he has already started to develop as he goes about constructing our squad for next season. He is striving to put together the most exciting and most talented team that we have seen in our three years in the USL.”

Vaudreuil, a graduate of Princeton University, is bilingual, speaking both English and Spanish. He holds an A Coaching License with the United States Soccer Federation.

“We have all the pieces in place to build an incredible franchise,” said Vaudreuil. “A stable and committed ownership group, a state of the art venue in ONEOK Field, and a first-class training facility in Titan Sports and Performance Center, and it will all help to attract international level players and staff. I am truly excited to begin work on building a dynamic and skillful team with the desire to win games and championships while entertaining the fans."