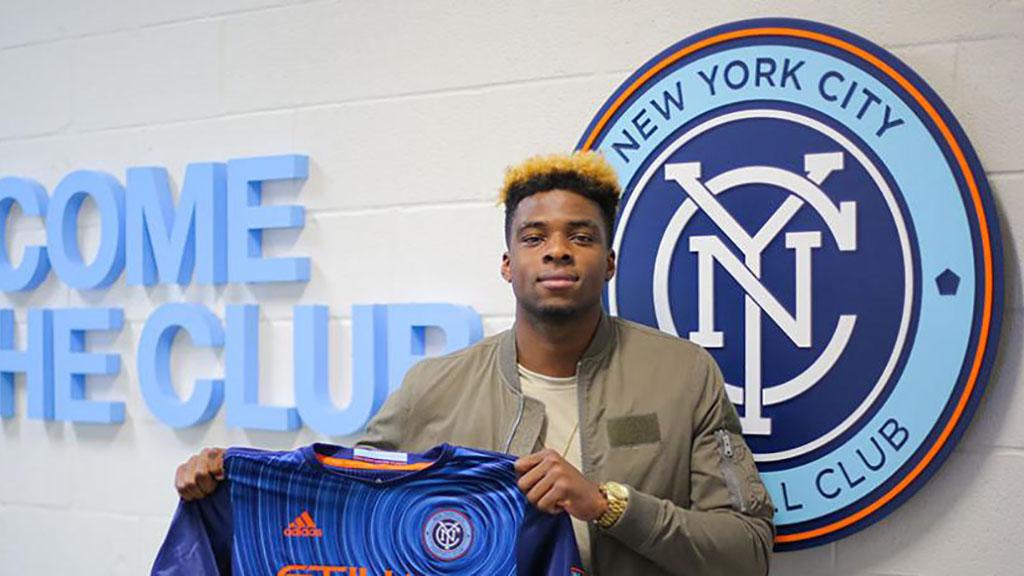 “The beautiful game can take you to some great places and I feel so blessed to be here,” Okoli said in a club statement. “I know the team plays attacking football and I love that, so I’m looking forward to being a part of it.”

Okoli earned the USL Golden Boot with 16 goals in the 2016 regular season, and was voted to both the USL All-League First Team and as the league’s Most Valuable Player. The 23-year-old joined FC Cincinnati in preseason, and faced NYCFC when the two teams met at the IMG Suncoast Invitational last February.

He went on to have a standout season in FCC’s inaugural year. Okoli scored the first home goal in club history – an outstanding volley that landed him on ESPN’s SportsCenter Top Ten – and helped the side finish third in the USL Eastern Conference. Now he will get the chance to play for NYCFC Head Coach Patrick Vieira and alongside legendary Spanish forward David Villa in his new home.

“It means a lot to play under Patrick Vieira – he’s been everywhere I want to be as a player and I know he has a lot of offer, so I’m excited to get working with as I just want to continue to grow,” Okoli said. “I know David Villa is a very special player who has scored big goals for big clubs so I just want to help continue this club’s success and score goals with him and with the rest of the team.”

A former Homegrown signing by Seattle Sounders FC, Okoli joined FC Cincinnati after a stint with the New England Revolution. After his successful season with FCC, Okoli is now looking to raise his game to an even higher level.

“It's a big club and we want to win here so it’s not going to be easy to just come here and continue to grow – I know I need to put the work in,” he said.  “I like to work really hard on the field and to score goals and hopefully I can do that in an entertaining way here in New York.”

Vieira – who led NYCFC to a second-place finish in the MLS Eastern Conference in his first season with the club – said he was delighted to have added Okoli to the NYCFC roster.

“I’m really happy to welcome Sean to this club as he is a talented striker who we believe has an exciting future in the game,” Vieira said. “Having had the opportunity to speak to him, he also is the kind of person we want at this club and I’m sure he is going to work hard to build on the excellent 2016 he enjoyed at Cincinnati.

“To win the Golden Boot and to be named as MVP in USL at his age are great achievements and so I’m looking forward to working with him in pre-season and throughout next year.”

“Sean has enjoyed an excellent year in USL with FC Cincinnati and we’re pleased he’s agreed to join NYCFC for the next chapter of his developing career,” said Reyna. “He’s someone who has been on our radar and he will give us options in the attacking third going into next season.

“It’s important for us to identify and recruit young American talent and we believe Sean is certainly a player with a promising future in the game.”