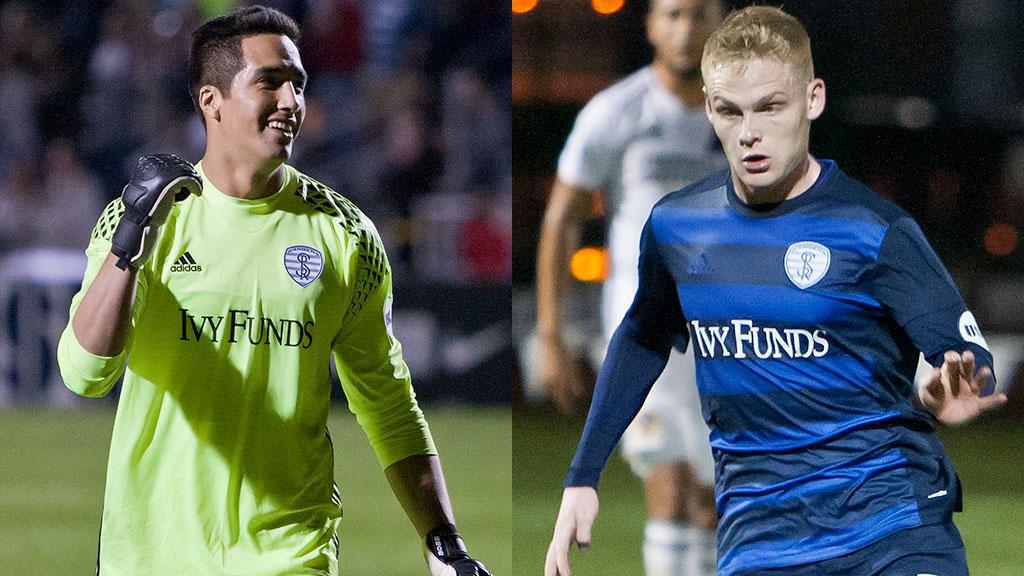 KANSAS CITY, Mo. – Sporting Kansas City announced on Friday it has signed former Swope Park Rangers midfielder Tyler Pasher and goalkeeper Adrian Zendejas to MLS contracts for the 2017 season, the club announced Friday. Both players have contract options for 2018, 2019 and 2020.

Pasher and Zendejas become the first players to sign MLS contracts from the Rangers, which claimed the USL Western Conference Championship and a place in the USL Cup Final in its inaugural season in 2016. As a Canadian, Pasher will occupy an international spot on Sporting KC’s roster.

“The excellent thing about this announcement is after only one year, the Swope Park Rangers have proven to be working in the manner in which we hoped,” Sporting KC Manager Peter Vermes said. “We were able to bring Tyler and Adrian to Kansas City last year and get an extended look at how each player would fit in our system. We think both players are going to be good additions to our squad with the potential to be major contributors in the future.”

“I’m extremely excited to have signed with Sporting Kansas City for the upcoming season,” Pasher said. “I’m grateful for this amazing opportunity and I’m so eager to get started. I’d like to thank the Swope Park Rangers and all of the supporting staff for helping me develop my game and for assisting me throughout the 2016 season.”

“I would like to thank Sporting KC and the Swope Park Rangers for giving me an opportunity that every player dreams about,” Zendejas said. “I also want to thank my teammates for a great first season with the Rangers. I’m excited to keep working, learning and growing with the squad. I feel really comfortable in Kansas City and can’t wait to see what the future holds.”

Pasher, 22, joined the Rangers in March after a successful preseason spell and played a leading role during the club’s inaugural USL campaign. He started 26 of 28 USL appearances with five goals and four assists (including playoffs), tallying three of his assists in the postseason as the Rangers were crowned USL Western Conference champions and advanced to the USL Cup Final.

Capable of playing as a left back or left winger, Pasher opened his Rangers scoring account with a brace versus Tulsa Roughnecks FC on May 14 and netted the game-winner in a 1-0 victory over rivals Saint Louis FC on July 2. He added a goal and an assist in a 3-0 win at OKC Energy FC on Sept. 18, a result that guaranteed the Rangers a spot in the USL Cup Playoffs. The Ontario native bagged his final goal of 2016 six days later against Seattle Sounders FC 2.

Pasher was named to Sporting Kansas City’s roster for the 2016-17 Scotiabank CONCACAF Champions League in August and made his club debut on Sept. 13 at Children’s Mercy Park, starting and playing 90 minutes at left back versus Vancouver Whitecaps FC.

Pasher had previously competed in the USL for the Pittsburgh Riverhounds as the side reached the USL Cup Playoffs in 2015. Internationally, Pasher has featured for the Canadian Men’s National Team at the U-17 and U-20 levels. He was also named to Canada’s senior team in March 2015 to train ahead of friendlies against Guatemala and Puerto Rico.

Zendejas, 21, joined the Swope Park Rangers last June. He debuted in a 2-1 win against the LA Galaxy II on August 27 and started five of the team’s final seven regular season matches, amassing a perfect 5-0-0 record with three shutouts, 13 saves and a 0.40 goals against average. Zendejas carried his great form into the postseason, earning two more clean sheets as the Rangers rattled off three straight victories en route to the USL Cup Final.

Zendejas finished the 2016 USL campaign with a 0.86 goals against average, five shutouts and 22 saves (including playoffs). The Rangers went 8-1-0 when he started, with the only loss coming in the USL Cup Final against the New York Red Bulls II.

Born and raised in Chula Vista, Calif., Zendejas previously played for Club Tijuana in Mexico from 2014-2015. He featured extensively for Tijuana’s U-20 side, totaling 31 league appearances while helping the Xolos reach the 2015 Apertura final and 2016 Clausura final. The 6-foot-5 goalkeeper made his first-team debut for Tijuana in a friendly against Club Leon on July 3, 2015 — claiming a 1-0 shutout win — before playing three additional preseason matches that summer.