11 Things: Down to the Wire

Fourteen playoff places have been claimed, but much remains undecided 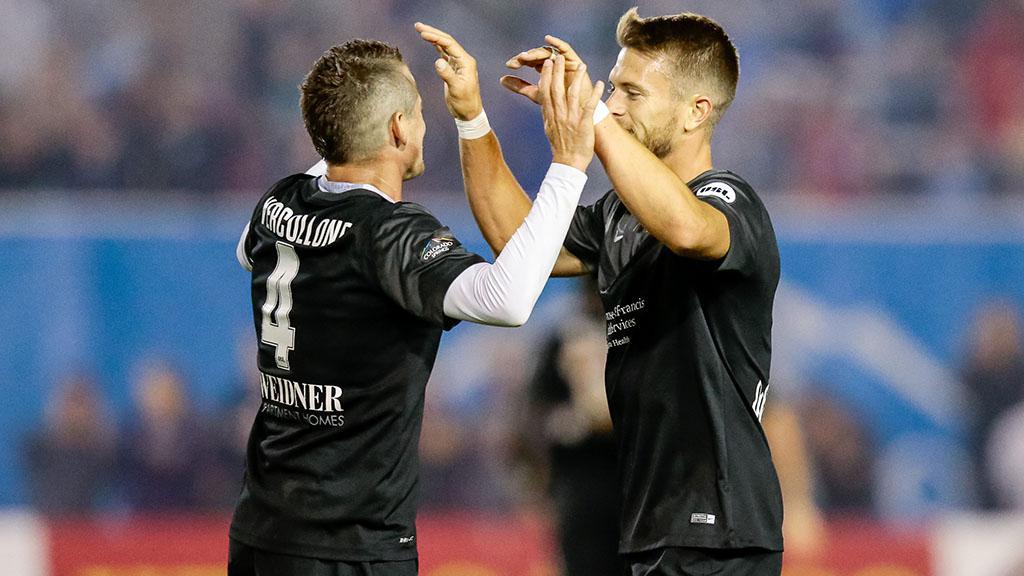 TAMPA, Fla. – Fourteen playoff places have been claimed, but much remains undecided in both the Eastern and Western Conferences going into the final seven days of the season. Here’s what we learned from the penultimate week in the USL regular season:

1. ROCKY MOUNTAIN RISE: As recently as three weeks ago, Colorado Springs Switchbacks FC was sitting in fourth place in the Western Conference, a loss to Rio Grande Valley FC leaving the side needing not only to put in a sprint to the finish on the field, but get some help from elsewhere to bridge the gap to the top. Now, the Switchbacks have the lead, and can ensure the path to the USL Cup in the Western Conference goes through Switchbacks Stadium with a win in its final game. The most recent victory in a three-game winning streak was its toughest, with Mike Seth’s stoppage-time goal against a Seattle Sounders FC 2 side desperate for a victory itself the difference, but now Colorado Springs heads to California with a spring in its step, looking to close out the competition.

2. FEELING BLUE: Colorado Springs’ opponent on Saturday night held the same circumstances as the Switchbacks going into the weekend’s action, as Orange County Blues FC held eighth place and the knowledge that two wins would see the side return to the postseason. A tight 1-0 defeat against Rio Grande Valley FC later, and the Blues now not only need to take a victory against Colorado Springs, but also get help from elsewhere if the side is to make the playoffs. Orange County didn’t perform poorly, but its late concession to the Toros put the club’s playoff hopes back on a knife-edge.

3. FEELING GRANDE: For their part, the Toros knew that a victory was needed to keep their chance at the top spot in the West alive, and thanks to Dzenan Catic’s late finish Rio Grande Valley could still find a way to the top as it sits a point back of Colorado Springs going to Saturday’s fixtures. RGVFC’s 15th shutout of the season kept the Blues off the board as they allowed only two shots on goal for the game, and Kyle Murphy’s delivery for Catic’s goal was perfectly executed to keep the Toros moving forward.

4. SOUTH TEXAS SHOWDOWN: To get the three points it will need to usurp the Switchbacks, RGVFC will need to get past a side that also has a lot to play for in San Antonio FC, as the two square off for the final South Texas Derby of the regular season. SAFC has overcome injuries, and saw the results this weekend go its way as it reclaimed eighth place in the conference standings, but the side’s finishing will need to be much sharper than in its 2-0 victory against Tulsa Roughnecks FC on Saturday in front of 6,735 fans at Toyota Field with chances likely to be much fewer and farther between.

5. T2 – JUDGMENT DAY: Five teams still remain in contention for the final place in the Western Conference playoffs, although Seattle Sounders FC 2’s opportunity seems very slim indeed given its goal differential issues, but of all the sides with a chance to overtake San Antonio for eighth place, the Portland Timbers 2 might just be the side to do it. T2 took its fourth consecutive victory on Sunday afternoon against Vancouver Whitecaps FC 2 as Villyan Bijev recorded a goal and assist to move the side within a point of San Antonio. Bijev is now tied for the league lead in assists with nine, and could be the key player as T2 looks to round out the season with a victory against Arizona United SC on Saturday.

6. STANDING UNITED: Portland took a victory just under a week ago when it last faced Arizona, but T2 need look no further than United’s 3-2 victory on Saturday night to be reminded the threat it poses as a spoiler. Arizona put a major dent in Real Monarchs SLC’s playoff hopes with its comeback victory that saw Peter Kelly notch another spectacular goal to add to United’s highlight reel of the season. Arizona may not have anything to play for itself, but a big final effort to close out the season could be expected.

7. RHINO RUMBLE: The Rochester Rhinos would have been left to play for nothing but a bottom-four seed in the Eastern Conference without a win against the Charlotte Independence, but a classic road performance that saw birthday boy Steevan Dos Santos – who turned 27 on Saturday – notch the only goal in a 1-0 win at Ramblewood Stadium kept the Rhinos alive in the race for fourth place in the East. The Rhinos now return to Rhinos Stadium on Saturday looking to close the season with a victory against Toronto FC II. Achieve victory, and get some help from elsewhere, and Rochester could begin its USL Cup defense on home turf.

8. PRESSURE RAISED: The Independence could have clinched a home playoff berth for themselves with a victory against the Rhinos, but now will face the pressure of going to Louisville City FC for their final game of the regular season with both Rochester and the Charleston Battery – 2-1 winners against archrival Richmond – snapping at their heels. Louisville guaranteed itself the No. 2 seed in the playoffs with its 5-1 win against Saint Louis FC to claim the Kings’ Cup, but it’s unlikely Coach James O’Connor will want his side to take its foot off the pedal in the club’s regular-season home finale, giving Charlotte a big challenge to claim a victory, and the No. 4 seed in the East.

9. ATTENDANCE RAISED: If there’s one team that could rest up this week with the No. 3 seed in the East clinched, and No. 2 seed Louisville out of reach, it’s FC Cincinnati, but given the record numbers that have continued to be in attendance for the club’s remarkable inaugural season, it seems unlikely that will be the case when the side visits Pittsburgh on Saturday. With 24,376 fans at Nippert Stadium to see the side grab a 1-0 victory against Orlando City B on Saturday night, you wonder how many of those might make the trip to Highmark Stadium this weekend to see out the regular season, and prepare for the club’s first home postseason contest.

10. DOWN TO THE WIRE: As for Orlando, Saturday’s contest showed the side in much better form than it has shown of late, even if the result wasn’t the desired one that would have clinched the final place in the Eastern Conference. OCB still holds the upper hand on its last challenger standing, Wilmington Hammerheads FC, for a place in the playoffs, and will know what it needs to do next Sunday when it visits Bethlehem Steel FC with the Hammerheads hosting Richmond on Saturday night. Can the Lions find one final push to get across the line?

11. SWOOPING IN: The Swope Park Rangers pushed their way across the line on Sunday night with a second consecutive 3-0 victory, and even managed to put themselves in position for a home game in the Western Conference Quarterfinals with their victory against OKC Energy FC at Taft Stadium. With two games in the week to come, the Rangers have the look of a side that could prove a challenge for any side in the West when the playoffs come around, and that is peaking at just the right moment to make a deep run in the postseason.