Two double-digit streaks come to an end, as other teams kick into gear 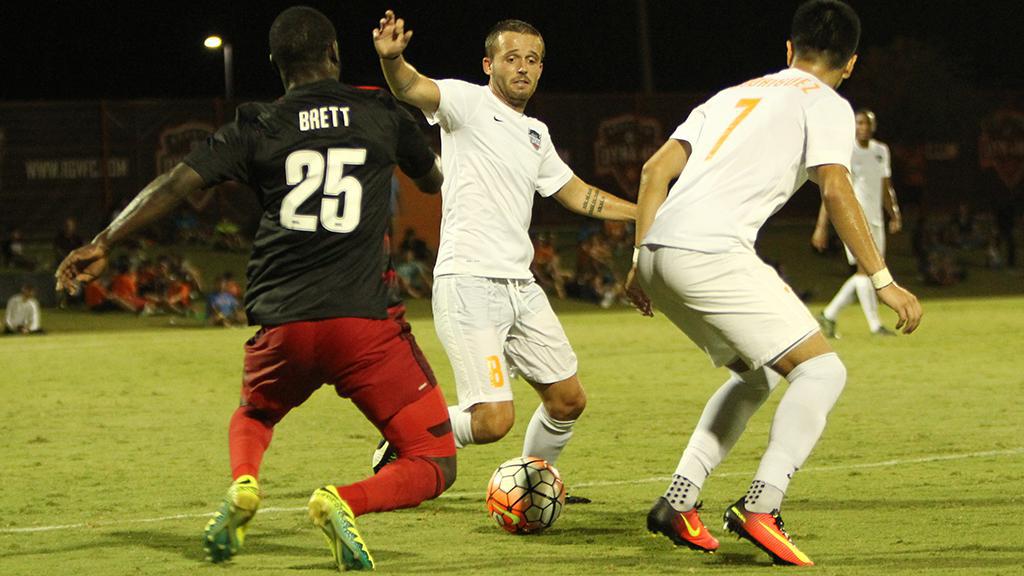 TAMPA, Fla. – Two double-digit streaks come to an end, as other teams kick into gear with the postseason in sight. Here’s what we learned from Week 25 in the USL:

1. ALL THINGS MUST PASS: Rio Grande Valley FC was riding high on a 10-game undefeated streak that had seen the side move within touching distance of first place in the USL Western Conference, but a 1-0 victory by the Portland Timbers 2 on Saturday brought the Toros’ remarkable run to an end at Toro Park. T2 played a solid road game to act as spoiler less than a week since performing the same role against OKC Energy FC, keeping its own slim playoff hopes alive with the win. If there’s a silver lining for the Toros, it’s better to lose now than when the playoffs – which the side had booked its place in the previous night thanks to Orange County – roll around at the end of the month.

2. KICKED OFF: The Richmond Kickers also saw their 10-game undefeated streak come to an end in Louisville on Saturday night, as the host’s 2-0 victory at Slugger Field saw the visitors unable to come up with many solutions to an impressive display by City. As opposed to the Toros, who are still in line for a top-two place in the West, the defeat for the Kickers could signal a missed chance to claim a top-four position in the East, and a tough road if the side is to claim its first USL Championship.

3. BACK IN THE GROOVE: On the flipside to the Kickers’ defeat, Louisville’s victory was one of its most impressive performances of the season, and rightfully termed “the best we’ve been in weeks” by Coach James O’Connor. Louisville looked sharper in all areas of the field, and will have been delighted to see Magnus Rasmussen find the net for his first goal of the season after injury troubles this year. With a home quarterfinal in the playoffs booked, Louisville could clinch the No. 2 seed by this time next week.

4. SWITCHED ON: Louisville wasn’t the only side that appeared to be rounding into form at the right time for a playoff run this weekend, with Colorado Springs Switchbacks FC taking a 2-0 victory on the road against Vancouver Whitecaps FC 2 on Sunday afternoon. The victory locked up a place in the Western Conference playoff field for the Switchbacks, and marked a continued boost in form from captain Luke Vercollone, who scored both goals in the win. Vercollone appears to be starting to push into more attacking spaces than at certain points earlier in the season, with Rony Argueta providing adequate cover in the center of midfield, and it’s paying dividends for a side that’s starting to look like a threat to make a run.

5. HEADING ON: Another example of a side turning it on at the right moment is the Charlotte Independence, who claimed a 4-0 victory against the Pittsburgh Riverhounds on Saturday night behind a pair of headed goals by David Estrada. Charlotte is not only 7-1-2 in its last 10 games, but has gotten hot in front of goal with 16 tallies in its last five games. With the diversity in attack the side possesses, including bringing Jorge Herrera off the bench on Saturday for his seventh goal of the season, and the chance to host a quarterfinal within reach, the Independence might be a dark horse in the Eastern Conference.

6. ASK ABOUT UGO: With three goals in his past two games, FC Cincinnati’s Sean Okoli is now tied for the league lead in goals with departed LA Galaxy II standout Jack McBean, and is continuing to act as the attacking centerpiece FCC expected him to be when it acquired him this offseason. With Cincinnati remaining in third place in the standings, a position it is likely to hold barring any major slip-ups in the next two weeks, Okoli can take aim this week at potentially claiming the USL Golden Boot, with games against Pittsburgh and Orlando on tap.

7. ALL HAIL HERRERA: While his side is a much longer shot to reach the postseason than Okoli’s, Irvin Herrera illustrated the value he’s brought to Saint Louis FC on Saturday night with an outstanding hat trick against San Antonio FC that kept him in with a fighting chance of the Golden Boot himself. The El Salvador international got right back into the swing of things following his international duty the previous week, and kept the door open mathematically for a postseason berth. With Louisville visiting this Saturday, it’s a steep road to climb, but Herrera could put the side on his back for one final assault.

8. FEELING THE SQUEEZE: The victim to Herrera’s standout performance, San Antonio saw its margin for error slip to just a point with its 3-1 loss at Toyota Field with a massive game now coming up on Wednesday night in the USL Game of the Week on ESPN3 against Real Monarchs SLC. SAFC holds the upper hand with the eighth-highest maximum points total in the Western Conference, but after Orange County’s victory against the Monarchs on Friday night, the Blues and Monarchs are both snapping at their heels, making the game at Rio Tinto Stadium a must-see.

9. SWEEPING UPWARD: One side that allayed its concerns over a place in the postseason on Saturday was the Swope Park Rangers, which put in a strong first-half display to take a 3-0 win against Tulsa Roughnecks FC. Highlighting the performance was a brilliant goal by Kris Tyrpak, while Dane Kelly had a goal and assist as well in the win. The Rangers still need five points from their final three games to guarantee a place in the playoffs, but the side could be a dangerous one should it make the postseason with the attacking options it has at its disposal.

10. SLIPPING AWAY: One side that had a playoff berth in its grasp this weekend, only to see it melt away, was OKC Energy FC as Seattle Sounders FC 2’s late equalizer by Tony Alfaro on Sunday night meant the host would have to wait for another game to book its place in the playoffs. More disappointing for OKC, though, is the likelihood that its shot at first place in the Western Conference may have slipped away too. Now with only the fourth-highest potential points total in the conference, Energy FC will have to work to get a home playoff game, and won’t get much respite with the Rangers coming to Taft Stadium next Sunday.

11. HAIL TO THE CHAMPIONS: It was a nice sight, seeing the New York Red Bulls II parading their USL Regular Season Championship shield at Red Bull Arena on Sunday ahead of the MLS clash between Atlantic Cup rivals New York and D.C. United. A draw in Rochester the previous day saw the side’s seven-game winning streak come to an end, but now the young side can focus on the sprint that is the playoffs. Only two teams have managed to claim the USL Championship in the same season as the regular-season title over the league’s five-year history. It will be interesting to see what happens next for Coach John Wolyniec’s charges.