11 Things: Pushing Toward the Finish

The Toros continue to roll, and the Red Bulls II move closer to a regular-season title 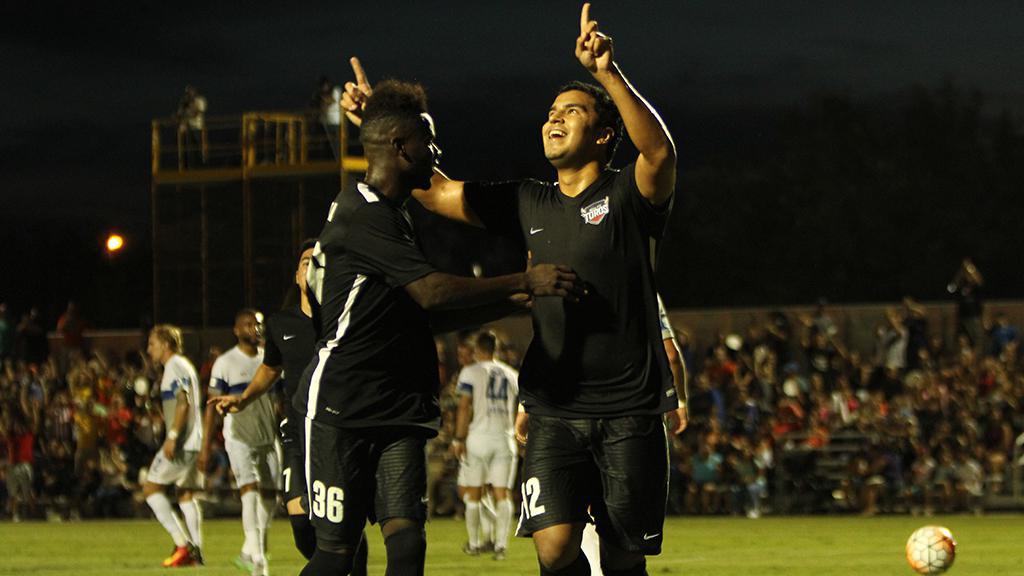 TAMPA, Fla. – The Toros continue to roll, the New York Red Bulls II move closer to a regular-season title, and two more berths are booked in the 2016 USL Playoffs. Here’s what we learned from Week 23 in the USL:

1. LUNA ECLIPSE: As Coach Wilmer Cabrera predicted it would in Grant Czubinski’s story last Thursday, Rio Grande Valley FC’s shutout streak came to an end on Saturday night, but the side’s winning ways continued in a 2-1 victory against Colorado Springs Switchbacks FC. At the fore was Ruben Luna, who converted a pair of penalty kicks against standout Switchbacks goalkeeper Devala Gorrick to give his side a victory after it had fallen behind to Josh Suggs’ opener for the visitors. Luna now has five goals in the past four games, picking up the scoring baton from Memo Rodriguez and Emilio Garcia.

2. TOROS TRENDING UP: The Toros’ victory helped reshape the race for first place in the Western Conference, with RGVFC now two points behind first-place Sacramento Republic FC with a game in hand. With the Toros’ undefeated streak now at nine games, the side will visit the Swope Park Rangers next Saturday night with continued belief in the manner it has reeled off victories of late, staying true to its core playing style.

3. CLOSING IN: The New York Red Bulls II moved even closer to claiming the USL regular season championship on Sunday evening as they completed a second impressive season sweep with their 2-0 victory against FC Cincinnati at Red Bull Arena. New York is now seven points away from clinching the regular season championship, with Louisville’s maximum points total of 62 the current number the Red Bulls II have to surpass to earn the silverware. With five games remaining in their regular season, it would at this point be a major surprise if Coach John Wolyniec’s side wasn’t lifting the shield before the end of the season. Despite the loss to NYRBII, expansion Cincinnati clinched its first postseason berth the day before, thanks to the combination of Bethlehem Steel FC’s 1-0 loss to Louisville City FC and Wilmington Hammerheads FC’s 2-2 draw against the Rochester Rhinos.

4. FINISHING KICK: While New York was closing in on silverware, the Richmond Kickers pushed their way into the USL Playoffs for a sixth consecutive season thanks to their 1-0 win against Orlando City B on Saturday night. Scott Thomsen’s first professional goal proved the difference as the Kickers’ undefeated run reached nine games, and Orlando’s winless streak reached four. Richmond’s run has put the side firmly in position for a top-four place at the end of the season, and with another crucial game coming next, the return to action of forward Matthew Delicate in a late cameo was also a welcome sight for the side.

5. BATTERY CHARGE: The Kickers’ next opponent on Wednesday night is the Charleston Battery, who are also coming off a solid victory of their own against the Charlotte Independence on Saturday night at MUSC Health Stadium. Maikel Chang’s goal was the lone tally as the Battery claimed the Southern Derby title for the season, and kept the Battery’s hopes of earning a home playoff game in view. The Battery have the fourth-most available points in the Eastern Conference, and with the addition of U.S. U20 National Team forward Jeremy Ebobisse on loan for the rest of the season the side could pull off a late run past its rivals.

6. MIND THE GAP: The Twitter hashtag #FearTheBeard was popular in San Antonio prior to Saturday night, but after goalkeeper Matt Cardone’s performance on the road against Saint Louis it might take on a life of its own. Cardone’s seven-save performance in a 2-0 victory put SAFC in firm control of its playoff destiny, as its advantage in points available stretched to five points over Real Monarchs SLC, six points over Orange County and seven over Arizona and Seattle. While there’s still work to be done, SAFC and Cardone have overcome their injury struggles to put together their best form of the season.

7. MOVING INTO RANGE: The other side that benefited most from this weekend’s results in the playoff crunch was the Swope Park Rangers, whose 2-1 win against the LA Galaxy II kept the side in ninth place currently, but within a point of Orange County with two games in hand. The Rangers and San Antonio face off on Wednesday night in another playoff “six-pointer” at Children’s Mercy Victory Field, a game that will likely have players and fans from numerous other teams looking on anxiously as the playoff positions start to shake out.

8. MONARCHS MAKE MOVE: The path to the USL Playoffs is a difficult one for Real Monarchs SLC, but the side continued to give itself a chance with a 1-0 win against Arizona United SC that spelled trouble for United’s own playoff aspirations. Real has quietly taken three victories in a row, and with a remaining schedule that includes mathematically eliminated Tulsa Roughnecks FC, and games against both Orange County and San Antonio, there remains an outside chance for the Monarchs to put in a similar run that they did at the end of 2015 and earn a first playoff berth in club history.

9. SINKING FEELING: The side the Monarchs face on the final weekend of the season, the LA Galaxy II, is in serious danger of getting dragged into the playoff race after a fourth defeat in its past five games. Los Dos grabbed an early lead on the road, but weren’t able to sustain it defensively despite the return of goalkeeper Clement Diop after his recent excursions in MLS, and are now only three points ahead of ninth-place Swope Park. The Galaxy II still have time to turn things around with six games to go in the season, but with clashes against Colorado Springs, Rio Grande Valley FC and two games against Sacramento, the pressure is on to turn things around against Arizona on Wednesday night.

10. SLIDING AWAY: With Orlando suffering a defeat at the hands of Richmond, the door was open for Wilmington Hammerheads FC to close the gap to eighth place to four points with Bruno Perone’s late goal against the Rochester Rhinos. Unfortunately for the Hammerheads, a stoppage-time equalizer by Wal Fall for the Rhinos put paid to those hopes, and sent the side’s playoff hopes sliding further out of view. The same applied to Bethlehem Steel FC in its 1-0 loss to Louisville, as both sides continued to miss out on the openings Orlando has left of late in the race for the final place in the Eastern Conference playoff field.

11. EVERYTHING’S OK-C: OKC Energy FC is still sitting in fifth place in the Western Conference, but its 1-0 victory against Tulsa to complete a season sweep of the Black Gold Derby kept the side firmly in the face for first place at the end of the season. With six games still  to play, OKC has a maximum points total of 58, more than any other side in the conference after the 0-0 draw between Sacramento and Vancouver on Saturday night. Energy FC needs to keep things moving on Wednesday night in Saint Louis, but the pathway to the top seed in the Western Conference is there for the taking.