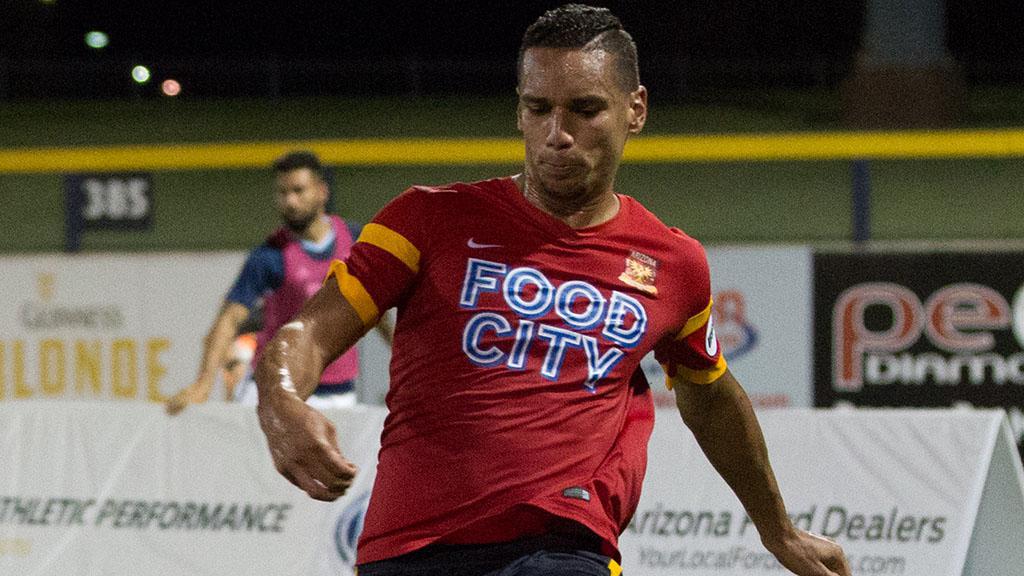 TAMPA, Fla. – Arizona positions itself in the middle of the Western Conference playoff race, and Richmond’s streak continues on. Here’s what we learned from Week 20 in the USL:

1. UNITED GETS SOME TLC: We’re not referring to The Learning Channel, or the popular all-girl band here, but rather the Arizona United SC front line of Tyler Blackwood, Long Tan and Chris Cortez, who apparently have nicknamed themselves thus. Whatever works, I guess, since on Sunday evening all three players were again on the score sheet in a 3-1 victory against Orange County Blues FC that capped a brilliant week for the side that catapulted it into 10th place in the Western Conference, and only one point back of the Blues in eighth.

2. HERE COMES THE SUN: Leading the way among United’s forward group has been Cortez, who had both game-winning goals over the past week after also notching a stoppage-time finish against Vancouver Whitecaps FC 2 on Wednesday night. While the veteran maybe hasn’t seen as many minutes as he’d have liked this season due to injury, when he has been available, Cortez has been excellent for the side, and among his six goals are some of the club’s best moments this season. Sunday’s free kick – against his former club – was another one to add to a fine collection.

3. STANDING PAT: Arizona’s two victories were even more crucial thanks to the lack of movement elsewhere in the race for the final playoff positions. Both Seattle and San Antonio earned a point on the road, while Saint Louis – officially scheduled – and Swope Park – washed out – didn’t see action. With five points now separating the teams sitting between sixth and 12th in the standings, every point will be crucial, but turning one point into three could make the final difference.

4. KICKERS PUSH HIGHER: The Richmond Kickers matched their longest winning streak in the USL on Saturday afternoon against FC Montreal, and while the win wasn’t the most convincing – Montreal’s late penalty kick seemed to shake the Kickers to life to find a winner – it did move the Kickers into the top four of the Eastern Conference. Holding that position might prove a challenge with Charleston sitting a point back with a game in hand, but on the other side of that Richmond could now pull level with FC Cincinnati – which it hosts this weekend – and potentially set a new club record.

5. LIVE AND LET YUDAI: At the center of the Kickers’ surge has been Japanese midfielder Yudai Imura, whose sixth goal in as many games proved the game-winner in Montreal. Coming off the back of his brilliant free kick in midweek against Rochester, Imura is making a difference for his side game after game to the delight of those within the club who have been thrilled by the personality that’s emerged off the field over the past two seasons. After struggling with injuries a year ago, Imura is showing what strong talent, and versatility, he possesses.

6. KING GEORGE IV: Former Kickers standout George Davis IV hasn’t maybe had quite the impact some thought he would at the start of this season for Louisville City FC, but Friday night’s victory against Pittsburgh showed why he’ll likely be a key for the side as it heads down the stretch. Davis’ pair of goals rallied City back to a victory, and allowed the side to regain first place in the Eastern Conference, and also moved Davis into second place on the team in goals with five this season. With Chandler Hoffman taking the lion’s share of attention from opposing defenses, spaces for players like Davis, Niall McCabe and Cameron Lancaster should open up and keep Louisville pushing toward its goal.

7. LIONS ROARING: Don’t look now, but Orlando City B might have figured out how to turn the draws it was stacking up into victories. The Lions’ undefeated streak reached nine games on Saturday night thanks to a second consecutive weekend with a stoppage-time winner as it took a 2-1 win against Toronto FC II behind Michael Cox’s close-range finish. OCB is now looking like a solid bet for a playoff position, with the top eight in the conference now holding a five-point edge of the rest of the Eastern Conference, and with the late heroics the side is pulling off, they’re starting to look a lot like the side most fans will remember from Orlando’s previous history in the league.

8. TIMBERRR!: As close as the race for the Western Conference Playoffs is, it’s going to take an awful lot for the Portland Timbers 2 to get back into the mix, but that’s not going to stop them for causing problems for the teams above them in the standings, as evidenced twice last week. T2 first got a top-shelf performance from goalkeeper Kendall McIntosh, and a timely equalizer from Rennico Clarke, to earn a 1-1 draw with Colorado Springs Switchbacks FC, but that was just the prelude to Saturday’s insane 4-3 comeback victory against the LA Galaxy II. Up by three goals at halftime, Los Dos appeared to be in cruise control, but a storming comeback after the Galaxy II were reduced to 10 men put paid to their hopes of regaining first place in the West as T2’s Villyan Bijev had two goals and an assist to give Portland arguably the most remarkable win of the season.

9. SITTING IN STALEMATE: If there was a silver lining for the Galaxy II over the weekend, it was that none of the other teams in the top five of the Western Conference were able to find a victory either. Vancouver had to rally back to take a 1-1 draw with Seattle Sounders FC 2 – which extended its undefeated streak to five games – while Sacramento Republic FC needed a stoppage-time penalty kick to earn a 1-1 draw with San Antonio FC in the side’s return to Bonney Field. With five teams separated by four points at the top of the standings, there’s still so much to be decided, should anyone want to start winning again.

10. TORTURED TOROS: The group at the top of the Western Conference could easily be made up of six teams right now, if only Rio Grande Valley FC was able to find the net. On Saturday against fellow contender OKC Energy FC, the Toros held the upper hand for most of the game, and created chance after chance to break the deadlock, but for the fourth time in the past five, the game ended scoreless. The Toros have been one of the most entertaining sides in the league in their inaugural season, and have outshot their opponents by a 221-189 margin this season. Should things start going their way in front of net, they could be a serious threat to all around them.

11. OPPORTUNITY KNOCKS: If things had turned out differently, Colorado Springs Switchbacks FC’s four-game winless streak would have knocked it well back of first place in the Western Conference as it enters tonight’s USL Game of the Week on ESPN3 against Real Monarchs SLC at Rio Tinto Stadium. Three consecutive lost leads at home against Swope Park, Vancouver and Portland haven’t come back to haunt the side as they might have, however, and the Switchbacks have the chance to move into second place with a win on the road tonight. Opportunities like this went begging over the course of the past week, though, so it should make for interesting viewing to see whether the Monarchs can be the latest to upset the apple-cart.