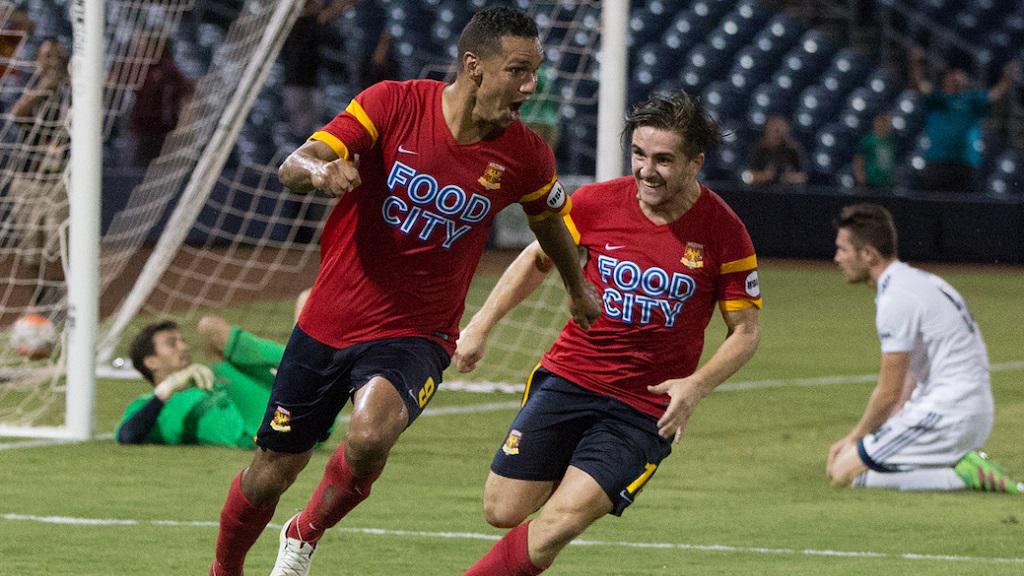 Less than one week ago, Arizona United SC suffered a blow with a 2-1 home loss to the Western Conference’s last-place Tulsa Roughnecks FC, on its home ground.

“I think Frank and Birch highlighted that even though maybe we think we’ve been struggling a little bit, the performances haven’t been too bad,” Rooney said. “It’s just been individual errors and conceding goals at terrible times that has really let us down.”

That pattern carried over for the first half and the early part of the second against West-leading Vancouver Whitecaps FC 2 on Wednesday at the Peoria Sports Complex, trailing by two goals and looking like another home defeat was potentially on the horizon.

That all changed with a scoring surge the club hadn’t seen all season. Rooney recorded a second-half brace and then Chris Cortez tallied the winner in stoppage time, rallying for a dramatic 3-2 victory against WFC2.

“Coming back from being down 2-0 is very important for us,” Yallop said. “I’m really proud of the guys. They did a good job not only offensively but defensively to not give up another goal when we’re pushing hard to get back into the game. I’m very, very happy. They gave everything they had.”

“I think it’s a bit of justice for how well we’ve been playing lately,” Cortez said after the match. “Including the Tulsa game, I thought we had a majority of chances. … A little bit of a testament to everyone’s character today to be able to battle, and obviously the most important thing is getting three points and making that playoff push.”

Arizona had the clear edge against Vancouver in terms of creating scoring opportunities and pressuring WFC2’s defense. It boiled down to being more precise with United’s final touches, and the club finally overcame that hump in the second half.

“I think the big thing is take what we’ve been doing well, take the chances we’ve been creating, [and] can we be a little more clinical itself and just make sure we don’t give up those mistakes,” Cortez said. “As long as we minimize those mistakes, we have a chance with any team.”

Arizona still has some work to do if it wants to be in the postseason hunt, but at the moment it is a wide-open race. The club is 6-8-6 (24 points) overall and four points below the current club holding onto the eighth spot, Saint Louis FC.

As far as significant moments go, Arizona’s win against Vancouver certainly tops the list. With just 10 regular-season matches remaining, including a key road matchup against Orange County Blues FC this Sunday, United’s turnaround against WFC2 was the type of spark that easily could filter through the entire roster, offense and defense.

“If this can’t be a turning point, I don’t know what will,” Rooney said. “Coming back from 2-nil down against the top of the league, winning 3-2 with the last kick of the game – if that can’t give us some confidence going in to try and make the playoffs then obviously nothing will.”