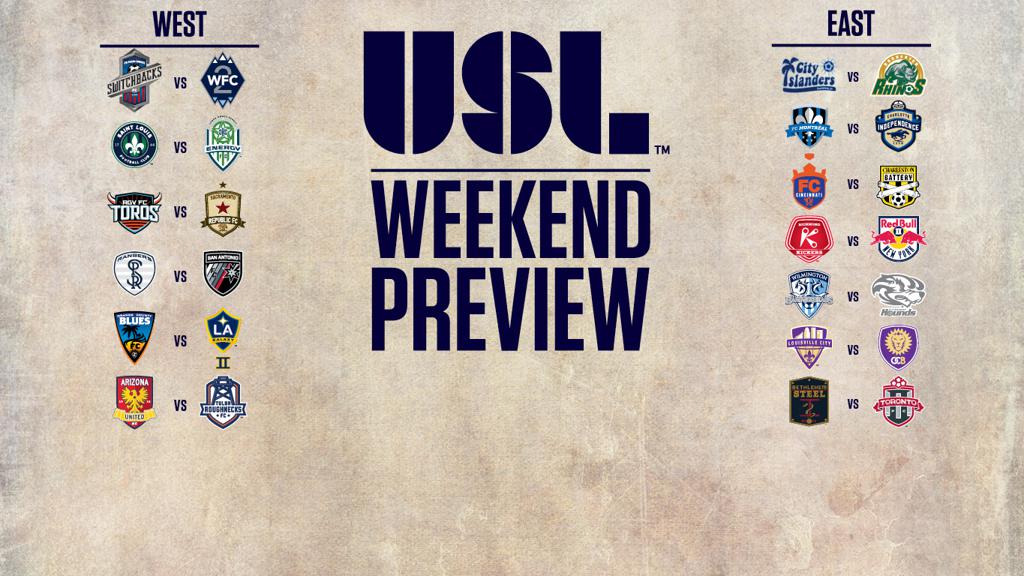 TAMPA, Fla. – Key top-four contests in both the Eastern and Western Conferences highlight a 13-game weekend slate of action in Week 19 of the USL season, as the race for the playoffs continues to tighten in both conferences. Friday night is marked by a marquee matchup as Colorado Springs Switchbacks FC plays host to Western Conference leader Vancouver Whitecaps FC 2, and Saturday evening sees FC Cincinnati and the Charleston Battery both look to build on big wins last Saturday when they meet at Nippert Stadium.

Every game of the 2016 USL season will be available on the league’s Match Center, with updates from across the league also available via Twitter, Facebook, Vine and Instagram.

GAMES TO WATCH
Friday, July 29
Colorado Springs Switchbacks FC vs. Vancouver Whitecaps FC 2
9 p.m. ET, Switchbacks Stadium
The third-place Switchbacks play host to WFC2 on Friday night with the chance to close the gap at the top of the Western Conference standings to just a point, as Colorado Springs hopes its strong home form this season will carry forward in one of the biggest games of the season so far.

The Switchbacks (9-6-4, 31pts) have one of the best home records in the USL, going 6-1-2 so far this season at Switchbacks Stadium. The side has struggled on the road, however, and is coming off a 2-1 defeat to Saint Louis FC last Saturday that saw it lose ground to both its guests on Friday and the LA Galaxy II in the race for first place out West.

Vancouver (10-4-5, 35pts) is coming off a victory at home last Sunday, as Thomas Sanner’s stoppage-time winner grabbed a 2-1 win against Sacramento Republic FC at Thunderbird Stadium. The victory got things back on track for WFC2 after a pair of road defeats in Texas, and Coach Alan Koch will be hoping his side can get a positive result on the road to maintain the separation the team holds on the chasing pack.

The Kickers (8-6-5, 29pts) have claimed three consecutive wins for the first time this season after last Saturday’s 3-0 victory against Toronto FC II, which saw Yudai Imura strike twice to move to six goals this season. Richmond’s strong recent form has seen the side move solidly into the playoff positions, and also saw the Kickers claim victory two weeks ago against Premier League side Swansea City A.F.C. in an international exhibition.

The Red Bulls II (12-2-5, 41pts) saw their 12-game undefeated streak come to an end last Saturday as they fell 3-2 to the Charleston Battery at Red Bull Park. After a big comeback victory against FC Cincinnati in midweek, the Red Bulls II rallied back from a two-goal halftime deficit against Charleston, only for the Battery to grab victory and deny Coach John Wolyniec’s side the chance to move ahead of Louisville.

FC Cincinnati vs. Charleston Battery
7 p.m. ET, Nippert Stadium
After closing the gap on the top two teams in the Eastern Conference last Saturday with their respective victories, third-place Cincinnati and fourth-place Charleston will square off at Nippert Stadium separated by just two points in the standings in another massive game for both sides.

Cincinnati (11-4-4, 37pts) claimed a 2-0 victory against Louisville in front of 20,151 fans at Nippert Stadium last Saturday in a win that not only moved the side within five points of the conference leaders, but also allowed it to claim the first edition of the River Cities Cup. Goals by Andrew Wiedeman and Sean Okoli either side of halftime saw FCC claim its biggest win of the season so far, and now it will look for both revenge and the chance to solidify its position as the leading contender to break up the top two against Charleston.

The Battery (10-4-5, 35pts) will enter the game confident after their 3-2 win against the New York Red Bulls II last weekend, and with two key players available again in Justin Portillo and Ricky Garbanzo, both of whom served caution-accumulation suspensions last Saturday. The Battery have won four out of their last five on the road, and also grabbed a 1-0 victory when these teams first met on the opening weekend of the season thanks to Romario Williams’ stoppage-time goal.

Saint Louis FC vs. OKC Energy FC
8:30 p.m. ET, World Wide Technology Soccer Park
Both Saint Louis and OKC are coming off victories last time out as they meet at World Wide Technology Soccer Park. Energy FC’s win against Tulsa Roughnecks FC in the Black Gold Derby extended its undefeated streak to seven games, which has seen the side move steadily up the Western Conference standings.

Saint Louis (7-8-5, 26pts) moved back into the playoff positions last Saturday as it took a 2-1 victory against Colorado Springs Switchbacks FC, with Irvin Herrera’s 10th goal of the season helping pave the way to the win. STLFC is locked in a tight battle for playoff position, as five points separate the teams sitting from seventh to 13th position, making every point vital in the stretch run.

Energy FC (8-2-7, 31pts) has pushed its way beyond the battle for playoffs thanks to its recent run of form, and could make a run at the top two as it sits four points behind Vancouver and LA with two games in hand on both as the weekend begins. OKC’s defense has been at the heart of its success, with a league-fewest 13 goals conceded overall, and only three goals conceded in its recent 4-0-3 run.

NUMBER CRUNCHING
17 – Louisville City FC’s undefeated streak – the longest in the USL this season – came to an end at 17 games last Saturday against Cincinnati. The streak finished five games short of the Richmond Kickers’ 22-game undefeated streak in the 2013 USL season.

0 – FC Cincinnati is the only USL team this season that has yet to have a player sent off.

OTHER NEWS AND NOTES
- USL executives, team owners and leaders converged on San Jose for the League’s annual Summer Meetings on Thursday. Executives were briefed on business, competition and operations platforms and shared initiatives to be undertaken by the League in cooperation with its teams.

- USLSoccer.com this week launched its inaugural USL 20 Under 20 series, a two-week look at the top young players across the league. The series will conclude next Friday with the unveiling of the top-rated player as voted by coaches from across the USL.

- Real Monarchs SLC midfielder Elder Torres has been named to the Honduras squad for the Men’s Soccer Tournament at the Rio Olympic Games. Torres has recorded a goal and two assists in 12 appearances for the Monarchs this season.

- Rio Grande Valley FC (7-5-7, 28pts) has the chance to jump past Sacramento Republic FC (8-6-5, 29pts) on Saturday night when the Toros host the 2014 USL champion (8:30 p.m. ET | Match Center). RGVFC is coming off a 4-0 win against Vancouver two weeks ago, while Republic FC is trying to shake out of a recent dip in form that has seen it go winless in its last four games.

- The I-405 Derby resumes on Saturday night as Orange County Blues FC (6-9-4, 22pts) fights for its playoff life against the LA Galaxy II (9-2-8, 35pts) at Anteater Stadium (10:30 p.m. ET | Match Center). Los Dos are on a four-game winning streak, and are hoping for the chance to go top of the Western Conference should Vancouver falter on Friday night.