Energy FC jolts to life, and Cincinnati makes history ahead of a massive week 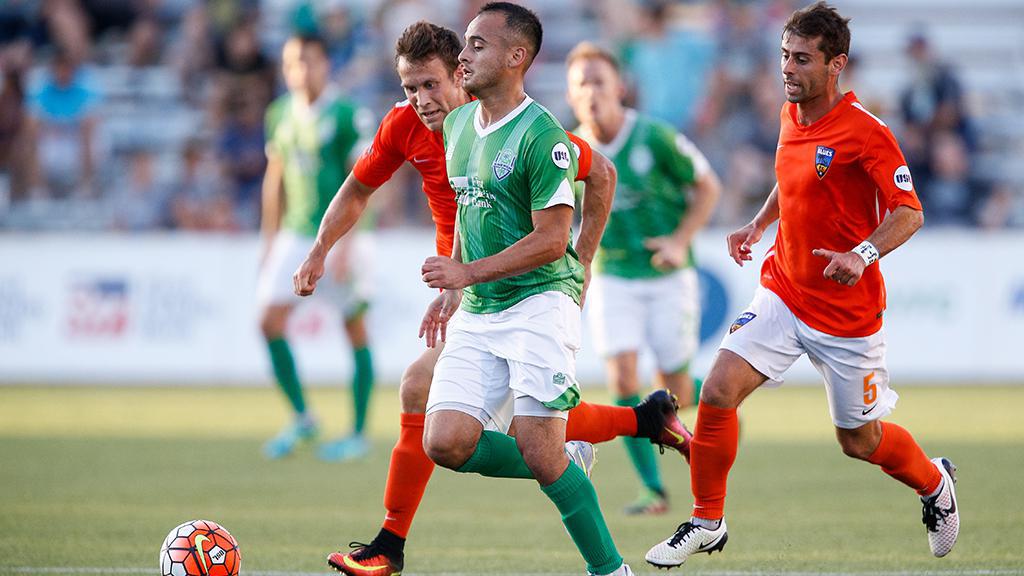 TAMPA, Fla. – Energy FC jolts to life, and Cincinnati makes history ahead of a massive week in the league. Here’s what we learned from Week 17 in the USL:

1. ENERGY BURST: Coming into the week with three consecutive draws, OKC Energy FC was finding out how the double-edged sword of games in hand could cut the wrong way. It then looked as though another stalemate was on the cards last Tuesday as the side sat scoreless late with the Swope Park Rangers until a sudden surge late on gave OKC a 2-0 victory. Now, after following that victory with a 2-1 win against Orange County Blues FC on Saturday night, it seems anything could be possible for Coach Jimmy Nielsen’s side, as it sits four points back of the top spot in the West, and is in with a chance to match – or even surpass – its second-place finish a season ago.

2. SPRING LOADED: The team Energy FC eliminated in one of the more thrilling contests of last season’s playoffs also did itself a world of good on Saturday night when J.J. Greer’s late winner earned Colorado Springs Switchbacks FC a 1-0 win against Sacramento Republic FC to move into third place in the Western Conference standings. The game itself would have been worthy of a playoff contest as both sides had great chances, only for Switchbacks goalkeeper Devala Gorrick and his Republic FC counterpart Evan Newton to put in a strong performance, but when Newton was unable to parry Greer’s header over, the host took a crucial three points in the race for playoff seeding.

3. CROWNING ACHIEVEMENT: FC Cincinnati’s record-breaking attendance of 35,061 on Saturday night as it welcomed Crystal Palace to Nippert Stadium for an international exhibition continued a remarkable season for the expansion side as it once again turned heads across the soccer landscape both in the United States and now overseas. Crystal Palace Manager Alan Pardew was effusive in his praise after his side took a 2-0 victory, saying “The atmosphere was phenomenal. It’s not often you get an atmosphere like that in a preseason game, and even some league games in the Premiership. Hats off to everybody who turned up tonight.”

4. OPPORTUNITY KNOCKS: As memorable a night as Saturday was for Cincinnati, the upcoming week has the potential to turn a good inaugural season into a great one as it welcomes the two teams that sit above it in the Eastern Conference standings for two must-see contests. On Wednesday night, the New York Red Bulls II visit Nippert Stadium for the USL Game of the Week on ESPN3 sporting an undefeated road record. Then on Saturday, the final regular-season edition of the River Cities Cup arrives, with first-place Louisville City FC and its 17-game undefeated streak the guest. With the right results for the host, the Eastern Conference playoff race could see three serious contenders by Sunday morning.

5. KICKING ON: It was certainly perplexing given the talent on the squad why the Richmond Kickers had struggled in front of goal so much this season. In fact, it wasn’t long ago that the side was averaging less than a goal per game, a far cry from the solid production we’d come to expect from seasons past. After back-to-back victories in the league, and a historic first victory against Premier League opposition on Saturday night as the side defeated Swansea City A.F.C. 2-0 in front of 7,128 fans at City Stadium, the Kickers seem poised to make a strong run to solidify their sixth consecutive playoff berth, and maybe even be ready to spring a surprise or two when the playoffs arrive.

6. SHOOTING HIGH: There’s still plenty of time left in the season, but this weekend made the race for the USL Golden Boot look even more like a two-horse race as both the LA Galaxy II’s Jack McBean and Louisville City FC’s Chandler Hoffman reached 14 goals for the season, as Vancouver’s Kyle Greig and Saint Louis’ Irvin Herrera faltered in their outings. The two scoring leaders shouldn’t be a surprise. McBean’s goal against Portland in Los Dos’ impressive 4-1 win was his 25th in the regular season all-time, while Hoffman now sits on 31 for his USL career after his brace led Louisville to a victory on Sunday night. With more than 10 games for each remaining this season, the subplot to watch will be if either can challenge the USL single-season record of 22 goals, set last season by Matt Fondy.

7. CARDONE COMES THROUGH: There’s always a sense of nervousness when a rookie goalkeeper steps into the net, but San Antonio FC’s Matt Cardone came through in a big way to help his side extend its undefeated streak to six games, and move into the top eight in the Western Conference, with a 2-0 victory against Vancouver Whitecaps FC 2 on Saturday night. Cardone’s penalty save on Kyle Greig in the first half proved pivotal for SAFC, which then scored on a penalty kick of its own in the second half thanks to Rafa Castillo, which proved to be the winner. With Josh Ford suspended for two more contests, Cardone will carry a mass of confidence into Saturday’s big game against a potent LA Galaxy II side.

8. WFC2 WASHOUT: The good news for Vancouver Whitecaps FC 2 is it remains on top of the Western Conference after being outscored 6-0 on its two-game trip to Texas. The bad news is its margin for error to maintain its position is down to zero. Vancouver couldn’t quite seem to shake off its penalty miss against San Antonio, but will need to quickly as it returns home to host Sacramento Republic FC on Sunday afternoon in one of this week’s big games.

9. ROAD WARRIORS: The New York Red Bulls II haven’t had any major problems so far on the road this season, and their 2-1 win against the Charlotte Independence was another indicator of the team’s resilience, and willingness to apply pressure on their hosts at any opportunity. Were there some nervous moments? Yes, as Charlotte played remarkably well even after going down to 10 men, but Ryan Meara’s five-save performance allowed New York to claim another three points on the road, and maintain its momentum ahead of Wednesday night’s clash with Cincinnati.

10. WILMINGTON WOES: A week can be a long time in soccer. Last Monday, Wilmington Hammerheads FC was looking pretty good, coming off a road win against Charlotte that moved it back into the playoff positions. Fast forward seven days, and the side is looking for a lot of answers after defeats to Bethlehem and Louisville saw it ship seven goals, and slump back out of the top eight. Sunday night’s visit to Orlando now looms large, and with three of their next four games on the road, the Hammerheads can’t afford to let the pack get too far ahead.

11. KEYSTONE KINGS: Even with their win on Sunday night, the playoffs still seem a long way off for the Harrisburg City Islanders, who would need to make up seven points in their final 10 games of the season to make their way back to the postseason. That said, getting one over on their in-state rivals with a 2-1 victory against the Pittsburgh Riverhounds will provide a nice boost for Coach Bill Becher’s side as it looks to regain the Keystone Derby Cup this season. In a disappointing season overall, that definitely counts for something for the Sons of Susquehanna.