Draws are death, as the weekend’s winners reaped the rewards 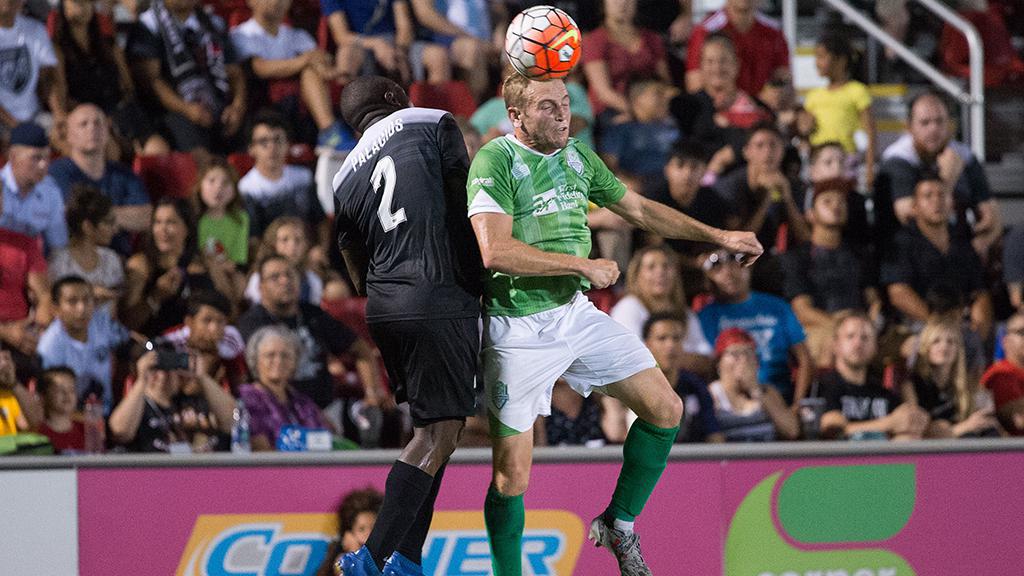 TAMPA, Fla. – Draws are death, as the weekend’s winners reaped the rewards. Here’s what we learned from Week 16 in the USL:

1. STUCK IN NEUTRAL: Including Thursday night’s game between the Portland Timbers 2 and Colorado Springs Switchbacks FC, seven out of 14 games this weekend in the USL ended up as draws. That’s a whole lot of teams who spent the weekend spinning their wheels, and for some it could prove costly at the end of the season. At the top of the list is OKC Energy FC, which has now drawn half of its games this season after a 0-0 draw with San Antonio FC. While the side still has games in hand on its rivals, Energy FC might not be destined to the move up the standings unless it starts racking up three points instead of one.

2. SWITCHBACKS’ BLUES: Speaking of games in hand, Colorado Springs looked as though it was sitting in good position to make a move one month ago, as it entered June 11th’s game with the LA Galaxy II. Including a draw in that contest, though, the Switchbacks have gone just 1-3-2 over their past six games, and failed to take advantage of the games in hand they held on teams like Vancouver, Sacramento and LA, all of which remain ahead of Colorado Springs as Week 17 kicks off. With Republic FC visiting Switchbacks Stadium this Saturday, Coach Steve Trittschuh’s side needs to right the ship.

3. SITTING PRETTY: If there’s one team that was happiest with the results around the rest of the league this weekend, it was the idle Vancouver Whitecaps FC 2, which will depart for a trip to Texas this weekend knowing it has a small cushion at the top of the Western Conference standings. WFC2 has been strong on the road this season as well, going 4-1-2 away from Thunderbird Stadium, and will have the motivation that it can add to its lead with a pair of positive results in Rio Grande Valley and San Antonio.

4. DOG DAY AFTERNOON: In reality, picking up points is never usually a bad thing, especially for teams going on the road, but Orlando City B continuing its undefeated streak in a 0-0 draw against the Rochester Rhinos on Sunday evening wasn’t necessarily a boon for its playoff hopes. Yes, Rochester is a tough place to play, but Orlando’s upcoming slate that sees games against Charleston, Wilmington and Louisville should have resulted in a stronger attacking effort than one which saw the side record only one shot on goal against the Rhinos.

5. REAPING THE REWARDS: Two teams that showed off the virtues of an attacking mindset on the road were the Richmond Kickers and Wilmington Hammerheads FC, who both jumped above Orlando and into the playoff positions with solid road wins over the weekend. Richmond struck early to gain the upper hand against a Harrisburg side that continues to spiral, while Wilmington struck in the second half to claim maybe the best result of the weekend on the road against Charlotte. In a tightly packed playoff race, the Kickers’ and Hammerheads’ victories gave a major leg up to their playoff hopes.

6. CINCINNATI BOUNCE-BACK: As with all undefeated streaks, Cincinnati’s had to come to an end sometime, but the way the side responded to its loss in Rochester on Wednesday night in taking a victory against Saint Louis FC on Saturday was admirable. Arguably one of the biggest pieces praise you can give a side is that it tries to play the same way on the road as it does at home, and Cincinnati’s assertiveness saw it record a 7-2 advantage in shots on goal against its host at World Wide Technology Soccer Park, and a deserved victory.

7. SWINGS AND ROUNDABOUTS: Another team that tries to take the same approach at home or on the road is Sacramento Republic FC, and on Sunday afternoon the attacking mindset shown by both itself and Orange County Blues FC provided maybe the most entertaining, and definitely the most compelling, game of the weekend. The 3-3 draw was a great illustration of what can happen when both teams look to take a victory, rather than settle, and should both teams continue with that mindset you feel they’ll be rewarded with wins and solid playoff positions further down the line.

8. GETTING THEIR WINGS: The New York Red Bulls II continued their undefeated streak on Saturday afternoon as Brandon Allen notched his first professional hat trick to lead a 4-2 victory on the road against FC Montreal. New York has been excellent on the road all season, and Saturday was no exception as it controlled large portions of the contest. For Allen, the hat trick gave him eight goals in his rookie season, and solidified his credentials as one of the leading candidates for USL Rookie of the Year at the end of the season.

9. BEST WEEK EVER: It doesn’t get much better than the week Toronto FC II’s Aidan Daniels had, as he first signed his first professional contract with TFC II, and then scored his first professional goal in the team’s 4-2 victory against Harrisburg on Sunday evening. With 10 games to go in its regular season, Toronto will need to string quite a few more wins together to have a shot at the playoffs, but if progression from year one is what you’re looking for, the team needs only two more wins to increase its total from a season ago, two more goals to surpass its total from a season ago, and beyond anything else a much more positive and confident group than what took the field last season.

10. STEELY RESOLVE: One dark horse when it comes to the playoffs might be Bethlehem Steel FC, which took a solid 2-0 victory on Sunday afternoon against the Pittsburgh Riverhounds at Goodman Stadium. Now sitting two points out of the final playoff berth in the Eastern Conference, the Steel definitely have the type of schedule that could see them make a run, with eight of their final 13 games on home turf and teams they’re chasing such as Thursday’s opponent Wilmington all having to visit Goodman Stadium during the run-in.

11. FEELING THE SQUEEZE: If there was a reason for all of the draws across the league this weekend, it was likely the fact that the pressure is starting to get turned up when it comes to the race to make the playoffs. As we saw a season ago, the margins in both the Eastern and Western Conference to being in or out are remarkably slim, with five points separating the teams sitting between fifth and 10th place in the East, and three points separating the teams between sixth and 11th in the West. It will be fascinating to see which teams crack, and which rise to the occasion over the next few weeks as head-to-head battles become that more intense.