The gap between the top and the middle begins to grow 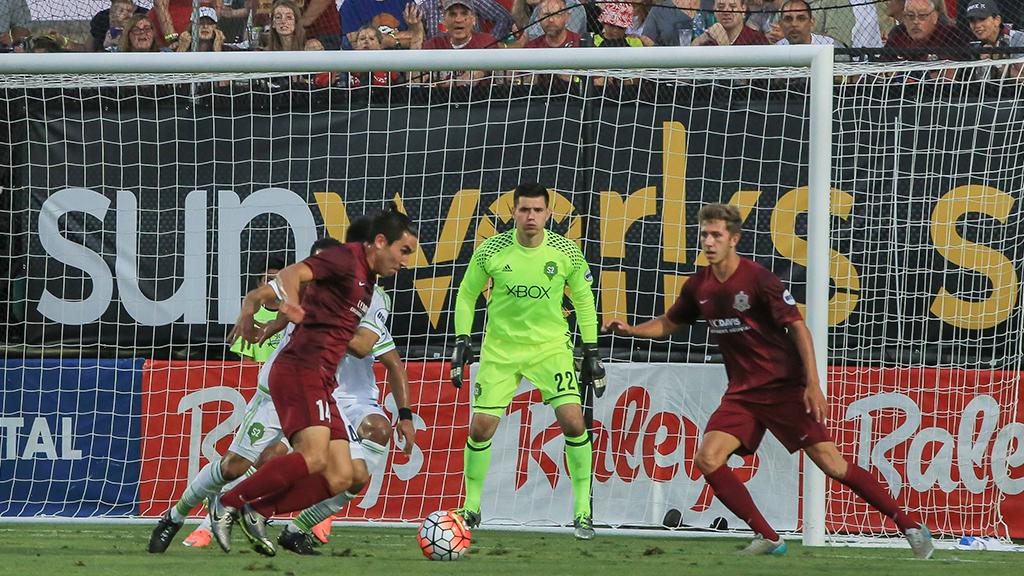 1. SACRAMENTO SOARS AGAIN: It was almost a night of frustration for Sacramento Republic FC, level late on against Seattle Sounders FC 2, but a fine header from Mike Da Fonte for his first goal for the club saw the side match its fellow Western Conference contenders with a big 2-1 win on Saturday that extended its nine-game undefeated streak in front of a sellout 11,569  fans at Bonney Field The win matched those by Vancouver Whitecaps FC 2 and the LA Galaxy II, which thanks to other results saw the trio start to create separation from the pack as the season reached its halfway mark.

2. WFC2 FINDS RIGHT FIT: Vancouver Whitecaps FC 2 left it even later to grab a victory on the road against Real Monarchs SLC, as Brett Levis’ stoppage-time goal pushed the side to a 2-1 win after the Monarchs had leveled late on through Tyler Arnone. WFC2 has come up with timely goals this season to remain on top of the Western Conference, and with a majority of its games in the second half of the season at home, Coach Alan Koch’s side has a good chance to remain there.

3. REMEMBER ME?: One of the oldest adages in sports, let alone soccer, is players will usually find ways to pay back their former organizations. This weekend that proved true as FC Cincinnati’s Jimmy McLaughlin gave his side a 1-0 victory against Bethlehem Steel FC to keep the side in third in the East in front of 17,380 fans at Nippert Stadium. A former Philadelphia Union Homegrown signing, McLaughlin has been consistently bright for his new side, and will have been very pleased to earn his side a big three points on home turf.

4. BATTERY BUILDING UP: As in the Western Conference, the top four in the East are starting to create separation on the rest of the pack, with the Charleston Battery remaining a point back of Cincinnati with their 2-0 victory against longtime rivals the Richmond Kickers. With shutouts in each of the past three games, the Battery appear well poised to try and get some revenge on Louisville City FC in their next outing on the road after Louisville snapped their 29-game home undefeated streak last month.

5. SQUARED OFF: The combination of teams at the top of the standings taking victories while those around them battled to stalemates was the other cause of the separation that has begun to occur, with the 1-1 draw between the Charlotte Independence and Orlando City B and 0-0 draw between OKC Energy FC and Rio Grande Valley FC the most notable deadlocks of Saturday night. Coming off two wins, Charlotte’s draw in Orlando after having led at the halftime break will likely be disappointing, but Orlando is showing serious gumption to remain in the top eight, and give itself a playoff chance.

6. POWER OUTAGE: While Charlotte might have been disappointed with its draw, it pales in comparison to how OKC Energy FC and Danni König in particular must have felt after their draw with the Toros. Two missed penalty kicks in relatively quick succession put paid to Energy FC’s hopes of taking all three points at Taft Stadium. OKC’s draw left it in the eighth and final playoff place, with games in hand on those above it in the standings, but Coach Jimmy Nielsen will need to start turning one point into three regularly if it’s to get to where it believes it should be in the standings.

7. WILMINGTON WONDER: A week ago, Wilmington Hammerheads FC was coming off arguably its most disappointing performance of the season as it fell 4-0 to the New York Red Bulls II. This week, the ship definitely appeared to have been righted as the side took a 3-0 victory against Toronto FC II behind three assists from Stefan Defregger. While there should be some caveats to the win – Toronto being short some key players the biggest – the Hammerheads are now just one win short of their total for all of 2015, and appears to have found the right balance between defensive pressure and using its speed on the counter-attack that will bring success.

8. ROCKY ROAD IN RICHMOND: The Hammerheads’ ascent into the top eight pushed the Richmond Kickers out of the playoff positions in the Eastern Conference after their 2-0 defeat to Charleston. The Kickers put in a disappointing first-half performance in Charleston, so much so that Coach Leigh Cowlishaw made four halftime substitutes to try and shake his team to life. It almost worked, Yudai Imura hit the left post with a strong finish early in the second half, but the Kickers’ lack of production in front of goal is starting to prove a concern. In particular, 2015 All-League selection Jason Yeisley has only one goal and one assist, as Richmond has 15 goals in 16 games this season. That needs to turn around, fast, if the Kickers are to keep their playoff streak alive.

9. OUT ON THE RANGE: A goal inside a minute, a long weather delay, and a lot of absorbed pressure later, and the Swope Park Rangers earned their first two-game winning streak since the opening two games of the season on Saturday as they took a 1-0 win against Saint Louis FC on Saturday night. The win wasn’t enough to move the Rangers into the Western Conference’s top eight, but coming off the announcement standout young attacking midfielder Kevin Oliveira would be out for the remainder of the season, it provided another step in the right direction for a side that began the season with playoff aspirations.

10. PUSH INTO THE PICTURE: In the same vein as Swope Park, San Antonio FC moved closer to the playoff picture on Sunday night as it took a 2-1 victory against Tulsa Roughnecks FC at ONEOK Field. Goals by Michael Reed and Franck Tayou – the second in as many games for both players – moved SAFC within a point of eighth place as the side reached the midway point of its inaugural season. With three consecutive victories, San Antonio now faces a key three-game stretch that sees OKC Energy FC, Vancouver Whitecaps FC 2 and the LA Galaxy II visit Toyota Field which could be a make-or-break spell for the side to make its way into the playoff positions.

11. FOURTH FIREWORKS: Technically, Monday night’s action kicks off Week 16 in the USL regular season, but on a holiday weekend there’s good reason to check into the first edition of the Keystone Derby Cup between the Pittsburgh Riverhounds and Harrisburg City Islanders, and Louisville City FC hosting FC Montreal. If you missed any of the games between the Riverhounds and City Islanders last season, you missed some serious action, while Montreal sprang one of the surprises of the season when it took a victory on the road against Louisville a season ago. We’ll see you tonight at the USL Match Center.