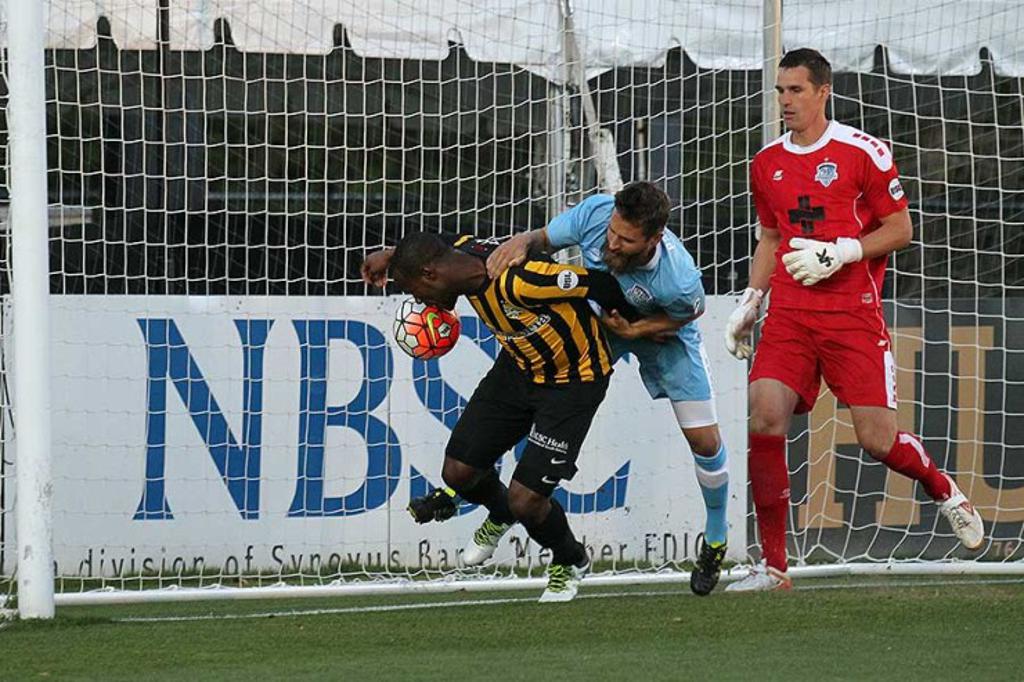 CHARLESTON — A late Taylor Mueller goal lifted the Charleston Battery to a 2-1 win over the Wilmington Hammerheads Saturday night at MUSC Health Stadium.

Despite largely dominating the flow of the match, Charleston (2-0-1) entered the final 10 minutes of regulation still tied 1-1. But when the team won a corner in the 85th minute,third-year midfielder and set-piece maestro Justin Portillo stepped up to make the delivery.

Portillo’s in-swinging corner descended into the box, and center back Taylor Mueller was first to arrive at the near-post. The four-year veteran, who also set up the first goal of the night with a set-piece header, flicked this one past Hammerheads goalkeeper John Smits to break the visitors’ hearts.

“We’ve done that so, so many times, Justin and me,” Mueller said. “I actually switched with Fergie (team captain and center back partner Shawn Ferguson), we were switching every time. He’d go near post, I’d go far-post, and vice-versa. Justin … put in a great ball, put the perfect touch on it, and luckily the keeper was sleeping just a little bit.”

Coach Mark Brigg’s Hammerheads (1-1-1) didn’t bow their heads, and appeared to have tied the match in stoppage time. The apparent equalizer was waived off when the referee judged a foul had been committed against Battery goalkeeper Alex Tambakis. He was walking stiffly as he celebrated the win with fans at MUSC Health Stadium, where the Battery are unbeaten in 27 USL matches dating back to a 1-0 loss to Wilmington on May 10, 2014.

“They were just coming at me,” Tambakis said. “They weren’t even looking at the ball. I was going strong also, but two against one is definitely a foul.”

The game between the two Carolina rivals started quickly. Romario Williams, who got his first start of the year, scored a goal in the second minute to put the Battery ahead 1-0. Williams’ goal came from a long throw by right back O’Brian “Obi” Woodbine. Mueller won the ball initially at the near-post, but his header hit the crossbar, bounced straight down, and failed to cross the goal line.

Williams tracked the ball well and despite heavy marking by Hammers’ defender Tom Parratt, headed the rebound across the line — barely. The goal was Williams’ second on the season.

In the minutes that followed it looked as if the Battery were going to run away with the game. But Wilmington battled back. Both teams played well defensively throughout, limiting the opposing team’s clear-cut scoring chances.

It took a perfect delivery from Wilmington midfielder Mael Corboz to unlock the previously not-scored-upon-in-2016 Battery defense. Corboz swung in a cross from a dead ball on the right side and 6’4″ center back Bruno Perone rose up over the Battery’s Ferguson and headed it past Tambakis.

Battery Coach Mike Anhaeuser was impressed by Wilmington’s progress from its forgettable last-place finish in 2015 under Briggs’ leadership.

“You’ve got to give credit to them,” Anhaeuser said. “We got the early goal, and I actually thought we had chances to open the doors and get things running, but they shut us down a little bit. They’ve changed a lot of things to be a lot more physical and more defensive, and they counter with a forward and he’s a handful. They’ve done a good job.

“Our guys don’t stop. You saw us. We were maybe down a little bit, but you saw us: We were always putting pressure on them. We always had them really defending. And free kicks started coming our way. That’s what we do. We don’t stop, especially at home. And we’ve got quality, too.”

Mueller, who ran to the stadium’s Supporters Section to celebrate the goal, basked in the fan love for a few minutes after the final whistle. But his mind was quickly on to the next task: Two weekends of away games at Charlotte Independence and Bethlehem United FC.

“We’ve got veterans in our locker room,” Mueller said. “We know what it takes.

“A lot of this team reminds me of the 2012 team when I was a rookie, and the veterans showed us: You have to grind out road games. That’s just the way it is. The atmosphere sucks, the hotel might be good, might be terrible, the food might not be what you’re used to at home, but you just have to adjust to it.”

When the Battery returns to Charleston on April 30th against the Pittsburgh Riverhounds on April 30, it will be attempting to stretch its “Oatmeal Power” streak to a USL-longest 28 games.

“Maybe it’s the yellow seats,” Anhaeuser said, laughing. “(The opposing players) look up and maybe it starts to put them to sleep.

“You’ve got to commend the players, and the fans are fantastic. It’s a group effort, and I love it. We want to keep it going as long as possible.”

TOP IMAGE: Forward Romario Williams scored the first goal of the night in the second minute as Wilmington defender Tom Parratt tries to hold him off. Vin Duffy/Charleston Battery photo.