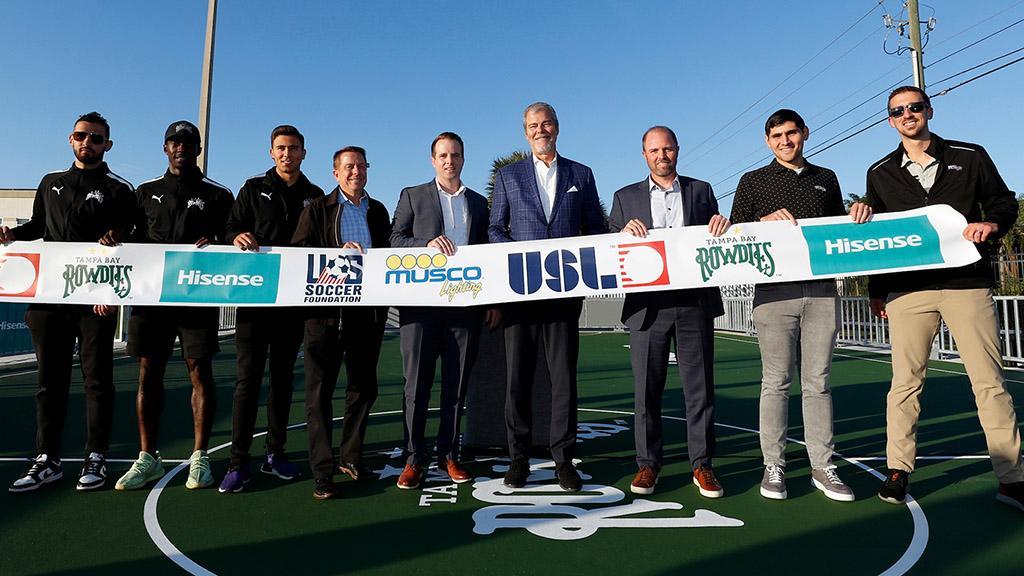 The Tampa Bay Rowdies officially opened the clubs new mini-pitch on Thursday evening with executives from Hisense USA, Musco Lighting and the USL on hand as part of the ceremony.

On Thursday evening, the club planted a new flag on the other side of Tampa Bay.

In collaboration with Hisense USA, Musco Lighting and the United States Soccer Foundation, the Rowdies unveiled a new community-oriented mini-pitch at the club’s new training facility in Tampa, the first arrival in a new initiative that will bring new facilities to markets across the United Soccer League.

The Rowdies are set to move into their new facility in Northwest Tampa in the new year, with the mini-pitch sitting alongside the recently re-laid training fields and upgraded offices and indoor training rooms that will become the club’s new base. The facility is one Rowdies Vice President Ryan Helfrick will add to the attraction for potential players for the club in the USL Championship while also offering a community resource, including the Rowdies Futsal Program that began late last year.

“I think the biggest thing for us is being able to cover both sides of the bay, be involved on the Tampa side and the St. Petersburg side and have a training facility, something that will draw players to want to come in the Tampa Bay area and play for Coach [Neill] Collins,” said Helfrick. “We’ve had the success on the field. Now to have success off the field and having a facility like this and being able to engage with the local youth, with this community mini-pitch, it will provide a fun and safe environment for kids of all ages to come and play.”

For 2022 Championship MVP Fernandes – who along with Ekra and Guillen hosted a youth soccer clinic after the ribbon-cutting ceremony – the investment by the club into the new facility will allow the club to not only remain a perennial title contender in the USL Championship, but also offer a place where new local talent can emerge.

“I think it just shows that the Tampa Bay Rowdies really care about the future and, and the future players that are coming out of Tampa,” said Fernandes. “This investment really proves it. To put out two amazing fields and a facility like that, it’s a great investment.”

The new mini-pitch initiative came about through the long-term partnership between the USL and both Hisense and Musco Lighting, with both organizations investing in the grassroots game in new markets across the United States. The two partnerships are part of a major expansion in league-wide agreements that have offered clubs in the Championship and League One new opportunities for business growth and community impact.

“I think it’s huge,” said Helfrick. “When I was part of the Rowdies in 2017, when we first joined the USL, we didn't have many league partners like we do today, especially that are involved with the USL Championship clubs like they are today. So, to have a relationship not only with Josh Keller and his team and having the league in our backyard in Tampa, but then being able to grow relationships with Hisense and Dave VanderWaal, their Chief Marketing Officer, has been very impactful for us.

“What we’re going to be able to do is have hundreds of kids come through this facility and play on this mini-pitch and get to interact with our coaches, players and staff throughout the year now.”