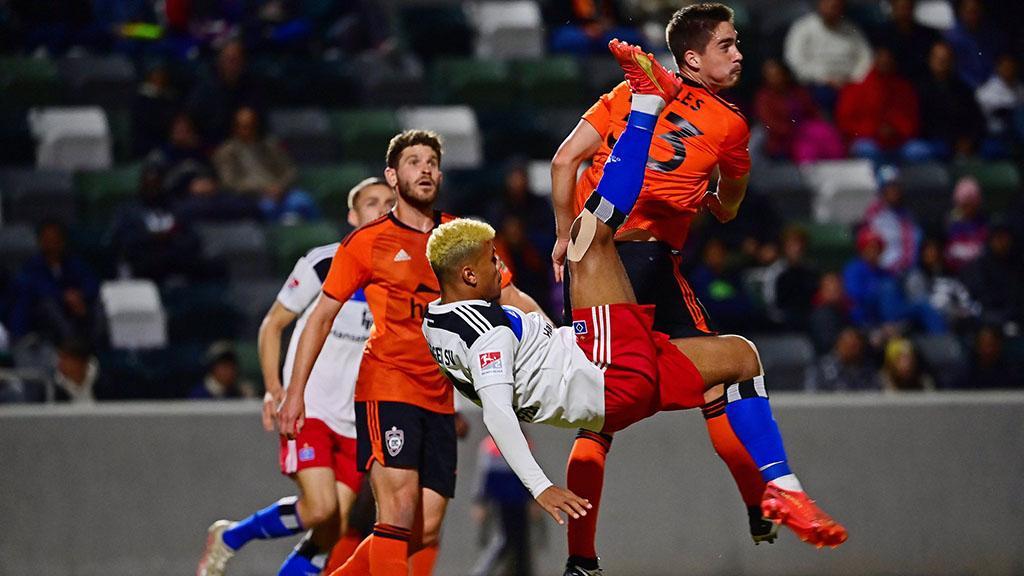 IRVINE, Calif. – A late first-half goal by Ransford-Yeboah Königsdörffer sent historic German club Hamburger SV to a 1-0 victory against Orange County SC in an international exhibition on Tuesday night at Championship Soccer Stadium as the hosts showed off some of their young talent while paying tribute to departing members of its 2021 USL Championship title-winning squad in the club’s final game of the 2022 campaign.

Making a winter trip to California as its 2.Bundesliga season enters its winter break, the visitors also saw Miro Muheim hit the woodwork, while Milan Iloski had opportunities for OCSC in an entertaining game before 4,168 fans.

Iloski had the first half-chance of the game less than third minutes in with an audacious effort from near the halfway line trying to catch out HSV goalkeeper Matheo Raab. The visitors went closer through Königsdörffer as he poked a finish just wide of the right post in the ninth minute as HSV controlled more of the play, but the attacking action began to pick up as the first half began to move toward its conclusion.

An effort from 25 yards by Brian Iloski for the hosts was smuggled wide of the left post by Raab in the 37th minute before three minutes later Muheim rattled the left post with a curling effort that narrowly missed the top corner. Four minutes before the break, however, Königsdörffer found the breakthrough, angling a header off a cross from the right channel by Sonny Kittel into the left corner of the net.

Orange County got some bright moments from United States U-19 international Korede Osundina, who played the first half, and 16-year-old Bryce Jamison, who played 67 minutes. The side also offered a farewell to departing players such as goalkeeper Patrick Rakovsky, who was substituted off to a warm reception in the 50th minute, and replacement Colin Shutler made a sharp low save to keep out HSV’s Xavier Amaechi and keep it a one-goal game.

The hosts were unable to find a late answer to Königsdörffer’s tally, but that didn’t put a damper on a good night for both clubs.

“It was a lot of fun,” said HSV captain Sebastian Schonlau. “In the stadium a good atmosphere was created. We could dictate how we wanted to play our game. That's important for us. I think it was a successful game for everyone involved.”