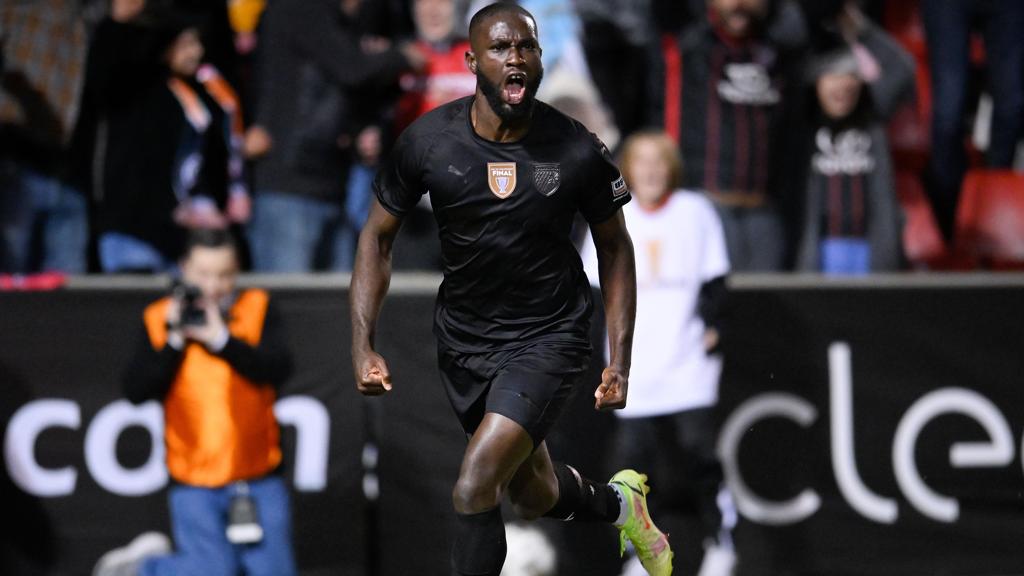 Samuel Adeniran's second-half goal was part of a display that showed off the full range of the 6-foot-4 forward's ability in the attacking third. | Photo courtesy Darren Abate / San Antonio FC

San Antonio FC claimed its first USL Championship title with a 3-1 victory on Sunday night against Louisville City FC, earning victory before a sellout crowd of 8,534 fans at Toyota Field before a national television audience.

Here are three things we took away from the game.

1. PLAYOFF PATIÑO: After Mitchell Taintor’s early miss from the penalty spot, there were a few of us having flashbacks to the 2021 Championship Final when an early saved spot kick by Orange County SC’s Patrick Rakovsky on the Tampa Bay Rowdies’ Sebastian Guenzatti proved a pivotal moment in Orange County’s victory. Thanks to Santiago Patiño, however, the hosts weren’t left to rue their missed chance. The Colombian’s fourth goal of the postseason in first-half stoppage time gave San Antonio a lead it had probably deserved after its strong opening half-hour, and as has become custom over the past two seasons there was no way back for the opponent. The 25-year-old added his fifth of the postseason with 20 minute to go, effectively wrapping up the result, and has now scored eight goals in the past two postseasons, making him one of the league’s all-time playoff performers.

2. SAFC SHOWS THE FLAIR: The numbers for San Antonio – as if it was possible – were even more strange than in its prior two contests. The hosts had a 38.7 percent passing accuracy mark on only 82 accurate passes, but there were some outstanding moments from the likes of Cristian Parano and Samuel Adeniran that lit up the night. The 2019 Championship Young Player of the Year in SAFC’s colors, Parano completed a game-high five dribbles, including a brilliant moment to set up the third goal for the hosts, while Adeniran’s all-around game was on display as he found the net, hit the post, and provided able support for Patiño. SAFC delivered sizzle with its steak tonight in a memorable victory.

3. LOUCITY CAN’T FIND EDGE: As notable as some of the absences were for Louisville City FC at the end of the season due to injury, we might be about to find out just how banged up some of the players that gutted out Sunday’s game were. As sharp as LouCity looked in some of its build-up play during the game, however, it was unable to find a telling pass consistently enough as San Antonio’s defense made the right moves to intercept and screen off runners when the ball came into the penalty area. Louisville put five of its seven shots on target, but only two came from inside the penalty area, one of which was Brian Ownby’s goal, which came off the only real error San Antonio made on the night. Louisville will be back next season, and probably better for this experience, but it just never felt like the visiting side’s night.