League title to be decided on Sunday, November 13, at 8:30 p.m. ET, broadcast nationally on ESPN2, ESPN Deportes, and Sirius XM 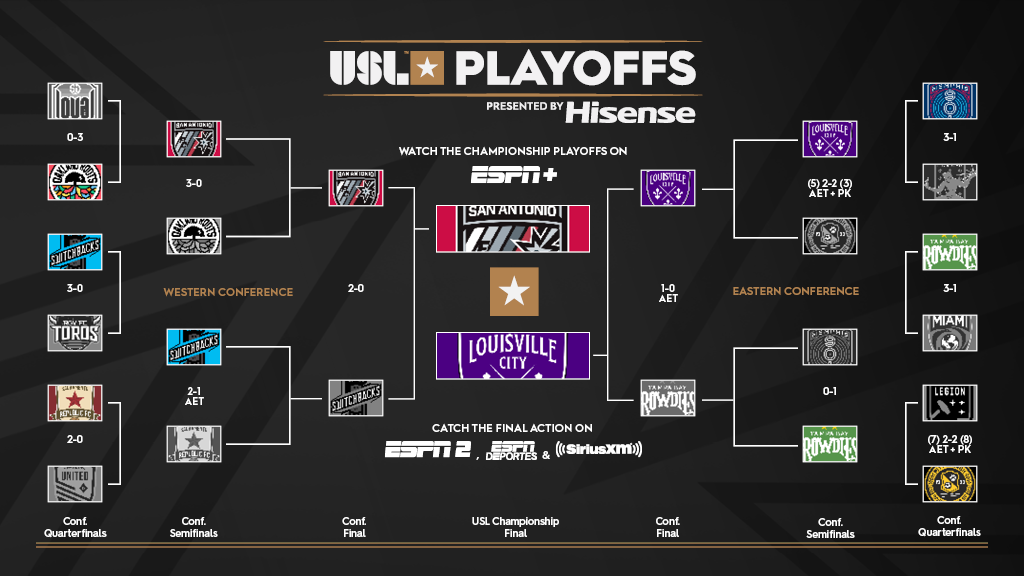 TAMPA, Fla. – San Antonio FC will host Louisville City FC in the 2022 USL Championship Final next Sunday night as the two No. 1 seeds from their respective conferences meet at Toyota Field with kickoff scheduled for 8:30 p.m. ET on ESPN2, ESPN Deportes and SiriusXM FC (Ch. 157).

The clash between San Antonio, the top overall seed in the playoffs, and Louisville City will mark the first meeting between the two clubs in their histories. It will also mark the first time since the Championship moved to a two-conference structure that the top seeds from both conferences will play for the league title.

SAFC earned its first trip to the Final with a 2-0 victory against No. 3-seed Colorado Springs Switchbacks FC before a sellout crowd of 8,245 fans on Sunday night at Toyota Field. A first-half goal by captain Connor Maloney – his first in the USL Championship for his career – sent the hosts on their way before Santiago Patiño’s second-half stoppage time strike put the game away. The goal was Patiño’s third in the playoffs.

LouCity will appear in their fourth Championship Final after earning a 1-0 victory against the No. 3-seed Tampa Bay Rowdies after extra time on Saturday night before 11,563 fans at Lynn Family Stadium. Elijah Wynder scored only the decisive goal in the 108th minute, giving LouCity the chance to add to titles in 2017 and 2018 and become the first three-time champions in league history.

Mike Watts, Devon Kerr, and Sarah Gorden will have the call on ESPN2 and SiriusXM FC while Jesús Eduardo Acosta and José Armando Rodríguez will call the action on ESPN Deportes in the final game of the 2022 United States professional domestic season.