Why Colorado Springs has flipped out for Michee Ngalina 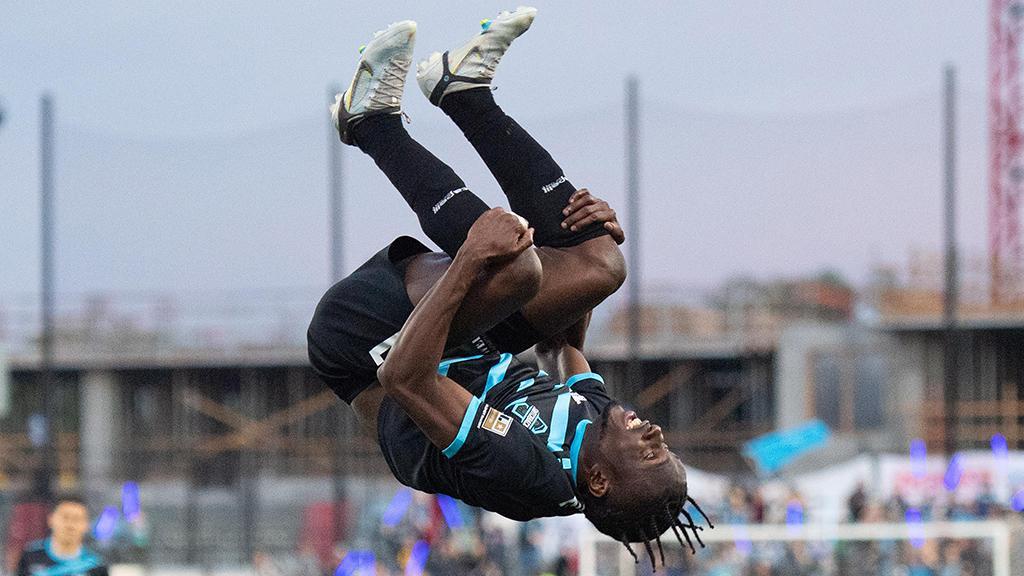 With 35 goals in the USL Championship across the regular season and playoffs, Michee Ngalina's signature backflip celebration has been a common sight since his debut in 2018. | Photo courtesy Isaiah J. Downing / Colorado Springs Switchbacks FC

Whenever Michee Ngalina finds the net for Colorado Springs Switchbacks FC, you know what’s coming next.

The Congolese winger’s celebration has become an unmistakable trademark in the USL Championship, and it’s just as his brother intended.

“My brother always told me, when we were young, ‘Hey Michee, you need to do a celebration that is different than everyone else and makes you stand out,’” said Ngalina this week. “So, he taught me how to do one, and now I feel like it’s in my blood and I just have to do it when I score. I can’t help it.”

Given the exuberance with which Ngalina plays and celebrates his on-field success – which has seen him record 22 goals and 17 assists in two seasons for Colorado Springs – you might figure that translates to his personality away from the field.

According to Switchbacks Head Coach Brendan Burke, however, that couldn’t be farther from the 22-year-old’s off-field style.

“It’s kind of the one moment where you see him, his personality, completely loose,” said Burke. “He’s soft spoken, very mild mannered, very pleasant person, never up, never down. You know, he’s just a very happy, pleasant person all the time. It’s very rare to see him not that way, but he’s also not super-expressive. So, when he does that, it’s actually just fun to watch.” 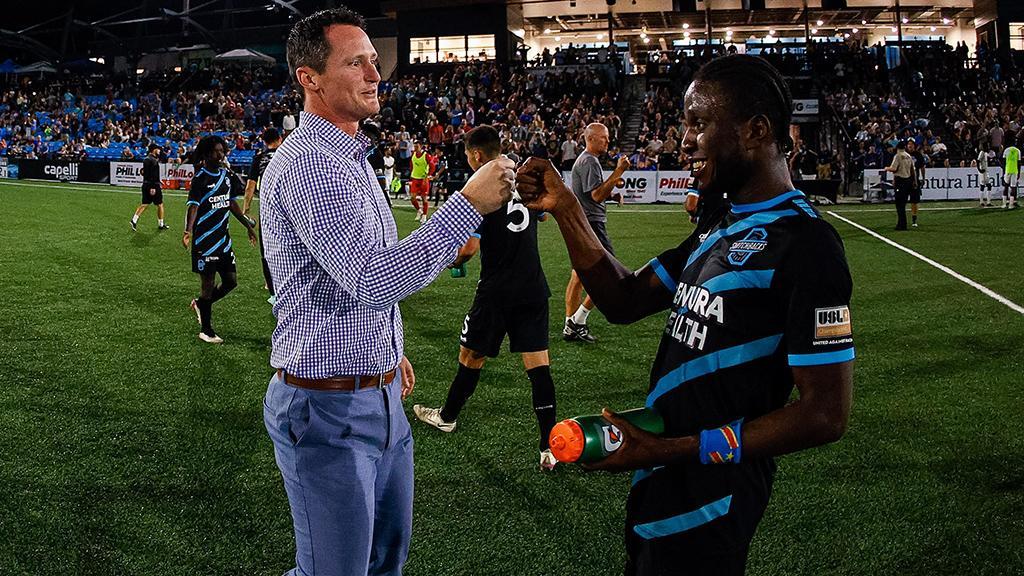 Burke and Ngalina’s relationship as coach and player goes back almost five years, when Burke was Head Coach at then-USL Championship club Bethlehem Steel FC. On a scouting trip with then-Philadelphia Union Sporting Director Earnie Stewart in Florida, the two saw Ngalina competing at the renowned Montverde Academy, and both quickly saw a potential star.

“He was only 16, 17, and we knew right away,” said Burke. “I mean, just in a game against Canada's Under-23s, he just jumped off the page at you. There were a number of excellent players on the field that night, including Alphonso Davies and others, and Michee not only belonged, he fit in, he stood out in a lot of ways. So, there was no hesitation on either of our parts to say we want to make this kid part of our organization.”

Ngalina’s journey to Central Florida from his home in Kinchasa in the Democratic Republic of the Congo after being identified by talent scouts playing for his local club’s U-17 squad proved the opportunity of a lifetime for the youngster, whose dream of a professional soccer career began early.

“I have pretty strict parents, and they really wanted me to focus on school, but even from a young age, for me the dream was to play soccer,” he said. “[My U-17] team had so many good players, so the fact that they picked me out of the group to bring over and to train with them and develop with them was huge. My whole family was so excited, and we knew what this kind of opportunity could do for me.”

Ngalina played alongside current United States Men’s National Team forward Brenden Aaronson and defender Mark McKenzie in the Steel FC side that reached the Eastern Conference Semifinals of the 2018 USL Championship Playoffs. He was signed to an MLS deal by the Union, but First Team opportunities were scarce and at the end of the 2020 campaign he and the club parted ways. For Ngalina, there was the potential to make the move to Europe with a club in Spain, but when Burke called to see if Ngalina wanted to join him after his appointment as the Switchbacks’ new Head Coach late in 2020, he jumped at the opportunity to reunite. 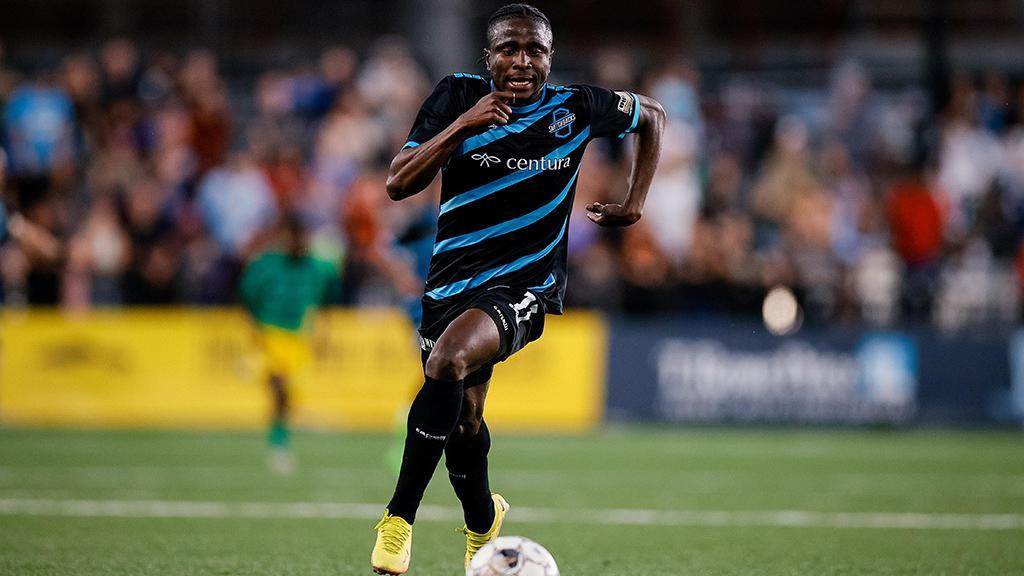 The move speaks volumes of the relationship the two have shared, even if it is the source of Ngalina’s nickname in the Switchbacks’ locker room of Michee Burke.

“For me, he is almost more of a dad than a coach,” said Ngalina. “I can’t even explain how amazing it is to have someone like him in my corner. He is the one who gave that trust and hope on my first day as a professional soccer player. He is someone I will never forget in my life, for what he did for me personally and for my career.”

Now a nominee for the USL Championship’s 2022 Young Player of the Year award, Ngalina’s second campaign with Colorado Springs has seen his game find new levels. He remains a serious threat in one-on-one situations – no-one in the Championship has completed more dribbles than Ngalina’s 80 in the campaign so far – but his progression in other elements of the game has paid off handsomely for his development as well as bringing continued on-field success for the club.

“When we first started working with him – and some of this is just building up your engine as an athlete, as a man, when he was 18 – it was difficult to fully recover after he made an attacking effort,” said Burke. “But now not only can he make an attacking effort – and the most difficult kind, which is breaking guys down off the dribble, so we can change the shape of the other team – but he makes full recoveries to the top of our box at a full sprint, and he does it routinely. These are the type of things – these little evolutions in his game – that are telling me that he’s going to be well rounded enough to play on a really big stage at some point.”

Ngalina’s maturation physically has seen him play all-but five minutes of the season this year for the Switchbacks and record individual season bests of 203 duels won at a 53.1 percent success rate, 23 tackles won at a 65.7 percent success rate, and 134 recoveries. He’s also notched individual single-season highs of 14 goals and nine assists going into Sunday night’s clash with San Antonio FC in the Western Conference Final of the 2022 USL Championship Playoffs presented by Hisense. 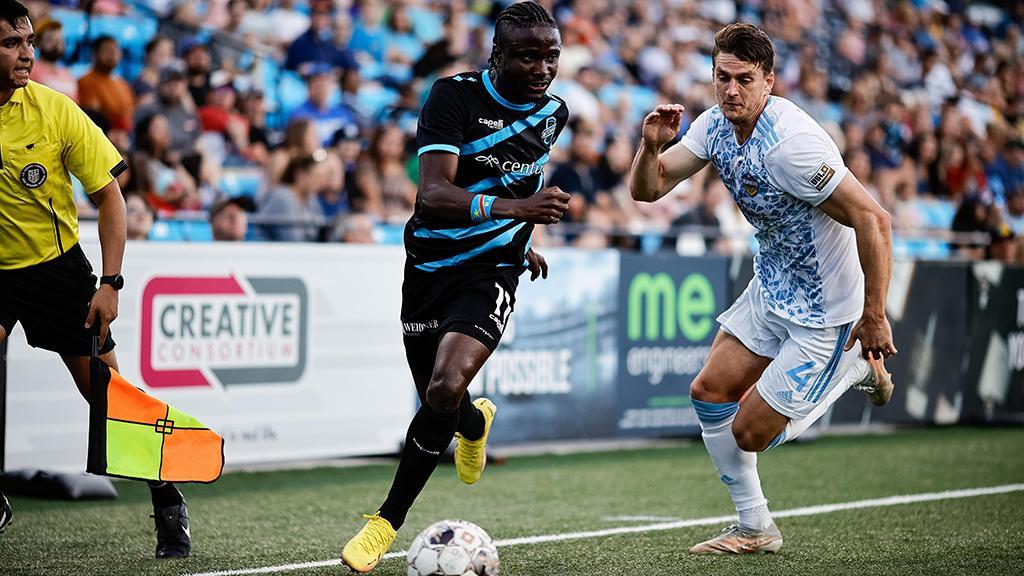 Coming off a two-goal performance against Sacramento Republic FC last Saturday night in a game that Burke rated as one of Ngalina’s top three individually as his coach, the winger feels ready to take on the best defensive side in the league.

“San Antonio is always tough, and I have a lot of respect for them,” said Ngalina. “But I feel like we are preparing our game really well. I know it’s going to be a tough game, but we’re ready to do something good out there, and we want to bring home that trophy.”

If Ngalina’s trademark celebration gets another airing, it could be a historic night in Switchbacks history.

“That would mean a lot for me. For me and the club,” he said. “That’s our mindset now – we’re pushing really hard to get the club this trophy. I’ve never won a trophy [in the USL] and I know how much it will mean to me and to the whole team to bring that back here.”