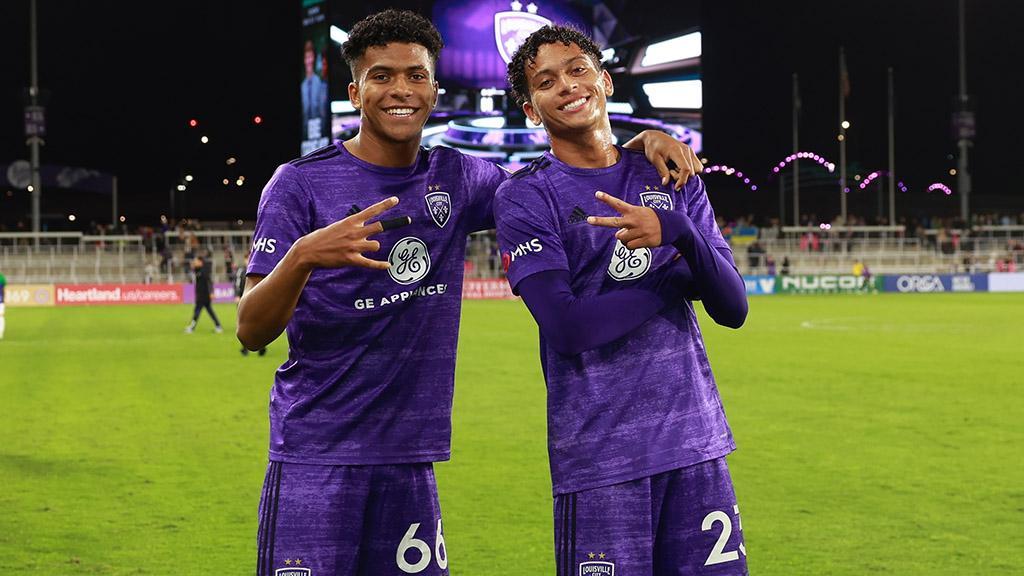 Louisville natives and brothers Joshua (left) and Elijah Wynder are among the first Academy graduates to sign professionally with Louisville City FC, and are making an on-field impact for the club. | Photo courtesy Em-Dash Photography / Louisville City FC

When Louisville City FC claimed its first two USL Championship titles in the 2017 and 2018 seasons, Elijah Wynder was looking on, inspired.

“The two stars, I was watching that as a younger fan,” said Wynder. “I can remember watching that and just dreaming of wanting to have that opportunity.”

Now, that opportunity has arrived.

This past Saturday, the 19-year-old midfielder – alongside 17-year-old brother Joshua and fellow 19-year-old Carlos Moguel Jr. – helped Louisville advance to its eighth consecutive Eastern Conference Final in club history, two wins away from a third star above the club’s crest.

As one of the local products that has quickly emerged from LouCity’s Academy – becoming the club’s first USL Academy signing in 2019 and subsequently signing professional terms with the club before the 2021 campaign – it’s a moment he’s eager to embrace, whatever his role might be on Saturday night as the side hosts the Tampa Bay Rowdies at Lynn Family Stadium.

“For me personally, I’m just happy to do whatever I can do to help the team get to where we want to be, which at the end of the day is to win the whole thing,” said Wynder. “But to be part of it, it’s unreal. I would never have expected it, looking back a couple of years. It’s a great feeling.” 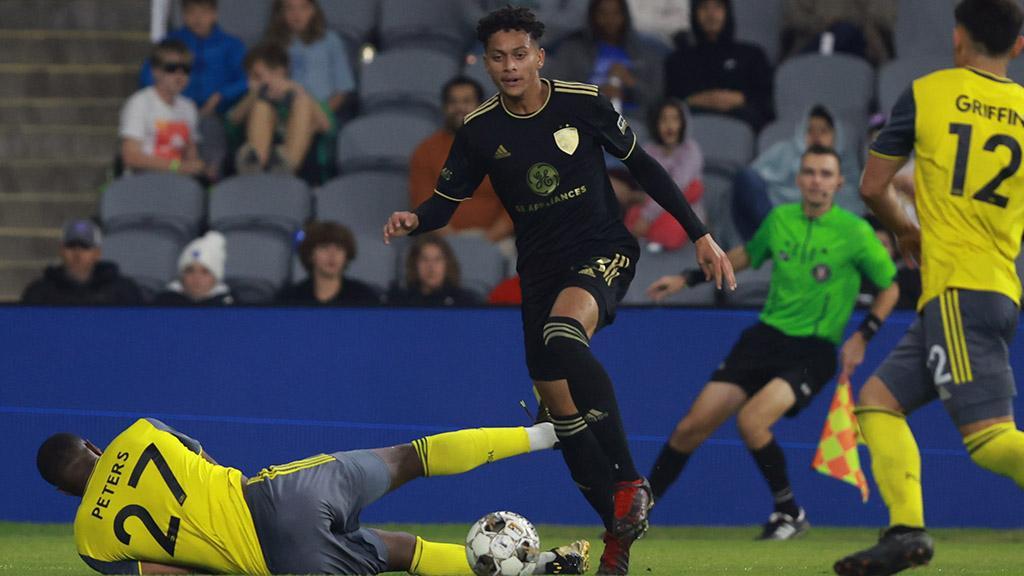 After a spell on loan with USL League One club FC Tucson earlier in the year, 19-year-old LouCity Academy graduate Elijah Wynder has made 11 appearances in the USL Championship this season. | Photo courtesy Em-Dash Photography / Louisville City FC

While Elijah’s younger brother Joshua has been the player grabbing most of the headlines this season, becoming a regular starter for the club and captaining the United States U-19 Men’s National Team, the pathway to this moment for Elijah might be why it’s so satisfying. After suffering a season-ending injury shortly after turning professional in April 2021, Elijah headed on loan earlier this season to FC Tucson in USL League One in search of minutes and experience.

The minutes might not always have been there for Wynder – he made only two starts in 12 appearances, logging 265 minutes of action – but the experience was one he believes he gained from overall.

“[It was] my first time being at a different professional club, away from home,” said Wynder. “There’s always positives in that, and then there’s dealing with the situation there, being frustrated. I think it was a good opportunity for me to come back here and be grateful for what we have here at Louisville.”

Wynder has now made 11 appearances for LouCity across the regular season and playoffs, providing depth for a squad that has been hit by injuries over the course of the season. The absence of players like club original Niall McCabe or newer arrival Jorge Gonzalez – who had logged almost 2,000 minutes this season before a knee injury ended his campaign prematurely – meant opportunity for Wynder.

For former LouCity player Luke Spencer – who now serves as the club’s Academy Director – seeing the way the Wynder brothers and Moguel have stepped into the lineup and played a part in keeping the club’s season on track has been rewarding.

“I enjoy every second I get to see those guys living out their dream because obviously I spent a lot of time with them,” said Spencer, who has also helped guide two other Academy graduates in Owen Damm and Sebastian Sanchez that have signed professional deals with the club. “Previously, where it was just a dream, they all wanted to be pros. Now they’re able to go on and contribute and live that dream out. I think that’s where this academy started, we wanted to provide opportunities for players ultimately to dream and to thrive. So, when you see it happening in such a short amount of time it’s fulfilling. At this point, I just enjoy it and I watch on with a lot of pride.” 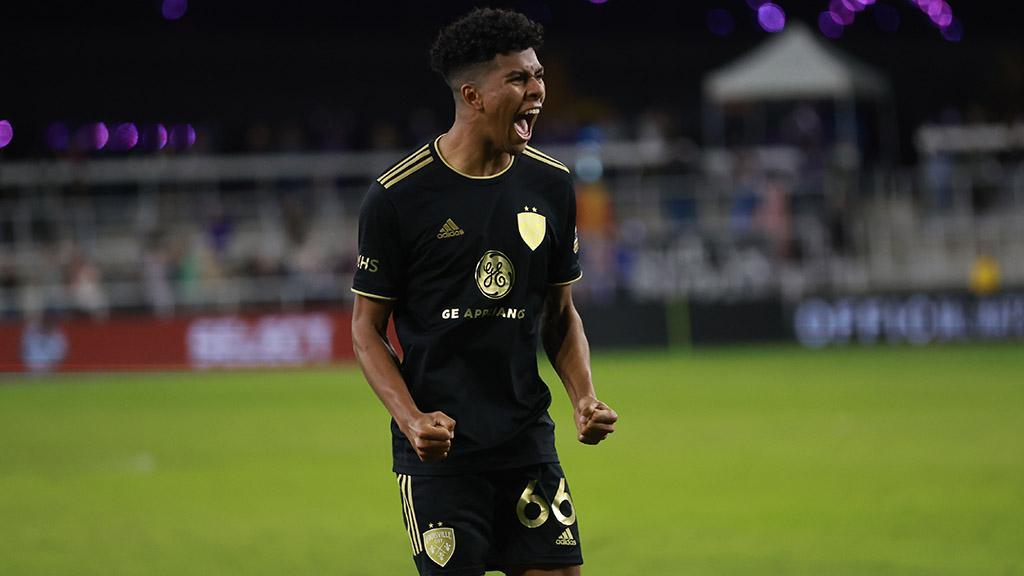 Not that it’s all smiles all the time for the player who scored the winning goal in LouCity’s 2018 title victory against Phoenix Rising FC when he’s watching his protégés. Spencer did admit to a few nerves when he saw Joshua Wynder and Moguel step up to the penalty spot in the shootout against the Hounds last weekend, hoping for both to succeed with the spotlight on them.

For Elijah, though, there was a confidence in his fellow Academy graduates, not least because of the prior shootout experience both brought from earlier in the season.

“Joshua put away one against St. Louis, Carlos had a PK in that one too,” said Elijah, referring to the penalty shootout LouCity won 9-8 against St. Louis City SC 2 in the Third Round of the 2022 Lamar Hunt U.S. Open Cup, with Joshua scoring the winner in the 10th round. “They both made theirs in a previous one, so our coaches knew that they would make it this time and they put them higher up [the order]. It was amazing, though.”

The confidence the club’s youngsters have shown comes in part from the belief LouCity has shown its younger players and the culture that has built them to be ready for the next opportunity. Elijah points to the mentorship he’s received from Paolo DelPiccolo and others in the First Team squad since his first opportunities to train with them, but the very presence of the club and what it offers for local talent might be the most important factor that has helped him reach this point and be hungry for more.

“I think it’s very important for all the young players in a city of a professional team to not only get out and support the local football team, but also believe that one day they can be out there playing on the same stage,” said Wynder. “If they have the dream and they put in the work, then there's no way to tell them that they can't be out there.

“It was a big part for me, like, my first time being called into a training session. You’ve just got to take advantage of the opportunity. It just takes that one time. You have a good performance, you get called back, and then from there, you just keep building.” 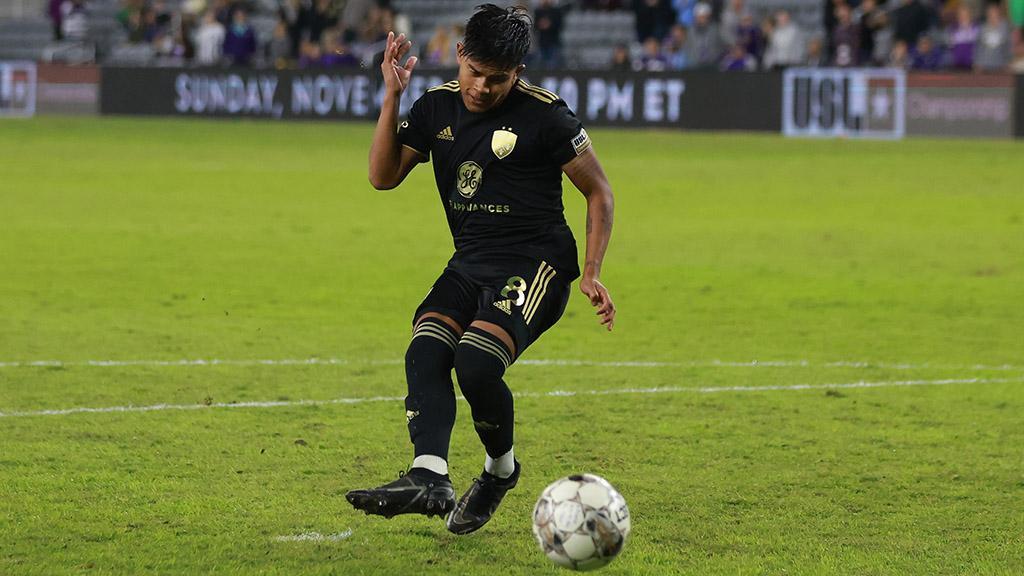 As the club’s first Academy graduates continue their path at the senior level, Spencer believes the trust and confidence the organization has shown in them will have a ripple effect on the players that are coming up through the club’s development platforms.

“It's a big statement for the club, that we’re invested in the youth,” said Spencer. “You know, that at that moment with the season on the line, with everything our club wants to accomplish, and winning the USL Championship, to be relying on the young players from our academy, it shows you how much we value our academy players and the players who are coming through.

“I think it also shows the influence that the culture has had, and the team has had, on the young players to be ready in that moment.”

Having been an observer when the side last won the league title four years ago, dreaming of the future, Wynder now has one goal in mind.

“That’s all I want. To be on the field with the trophies.”