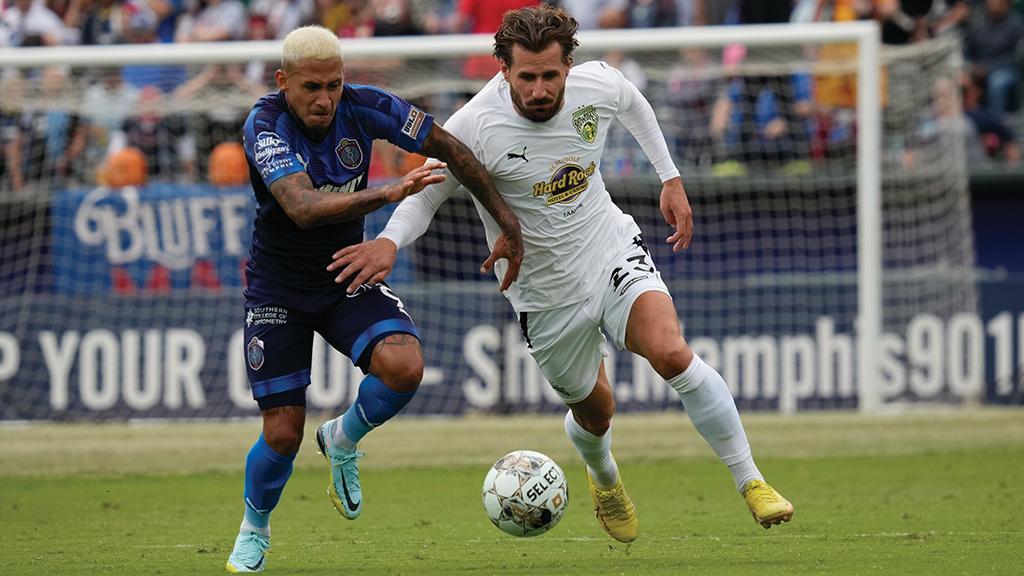 MEMPHIS, Tenn. – Leo Fernandes’ goal from the penalty spot in the ninth minute of second half stoppage time, which followed a penalty save by teammate Phil Breno four minutes earlier, sent the No. 3 seed Tampa Bay Rowdies to a 1-0 victory against No. 2 seed Memphis 901 FC, sending the visitors into the Eastern Conference Final of the 2022 USL Championship Playoffs presented by Hisense after an ending that packed all of its controversy and almost all of its goalmouth action into added time.

The Rowdies will visit No. 1 seed Louisville City FC in the third consecutive meeting between the clubs in the Eastern Conference Final next Saturday night at Lynn Family Stadium, with kickoff set for 7:30 p.m. ET.

With the game scoreless going into a minimum of five minutes of stoppage time, neither side appeared to have a solution to decide the game until Rowdies defender Jordan Scarlett was whistled for what appeared to be an innocuous screen on Memphis’ Phillip Goodrum as Breno made a long clearance upfield in the third minute of added time. Memphis’ Aaron Molloy stepped to the spot, but Breno came through with an excellent save on the effort to the left corner, parrying wide of the post.

That could have been it, but only a minute after Molloy’s effort was denied the Rowdies got a chance of their own. A long ball upfield was flicked on by Steevan Dos Santos into the path of Sebastian Guenzatti, and while the ball didn’t sit for Tampa Bay’s captain, Dayonn Harris seized on the ball first and was brought down by Memphis goalkeeper Trey Muse. Fernandes converted, sending his shot to the right corner as Muse went the opposite way on the Rowdies’ first – and only – shot on target of the match.

The drama of the ending made up for what had been overall a tightly played game that saw Memphis hold the upper hand overall. The hosts had made a positive start, controlling the tempo as the Rowdies had difficulty settling, but it wasn’t until the 17th minute that the first real effort on goal arrived on a half-volley by Derek Dodson that went well wide of the right post. 901 FC’s Jeremy Kelly went closer in the 32nd minute with a shot from 25 yards, but neither side produced a shot on target in the opening 45 minutes.

After registering only two shots in the opening half, the Rowdies brought on Dos Santos at the break and the veteran forward’s physicality started to have an effect. The Cape Verde forward produced the best chance for the visitors to that point in the 57th minute but his shot off the right post that was turned home on the rebound by Leo Fernandes was called back for a handball in the build-up.

901 FC got its own chance to break the deadlock midway through the second half as Laurent Kissiedou stole possession in Tampa Bay’s half and quickly drove forward into the right side of the penalty area, but his shot pulled agonizingly wide of the left post. Molloy produced the first shot on target with five minutes to go, meanwhile, as he stole possession as the Rowdies tried to move upfield and curled a low shot to the right corner that forced a good save by Breno.

But before the game headed to an additional 30 minutes scoreless, Breno’s save and Fernandes’ conversion delivered the Rowdies a chance to claim their third Eastern Conference title in the most dramatic of circumstances.

USLChampionship.com Player of the Match

Phil Breno, Tampa Bay Rowdies – Breno made a crucial pair of saves, first on a late chance for the hosts before his penalty kick save in stoppage time kept the game alive for the Rowdies.