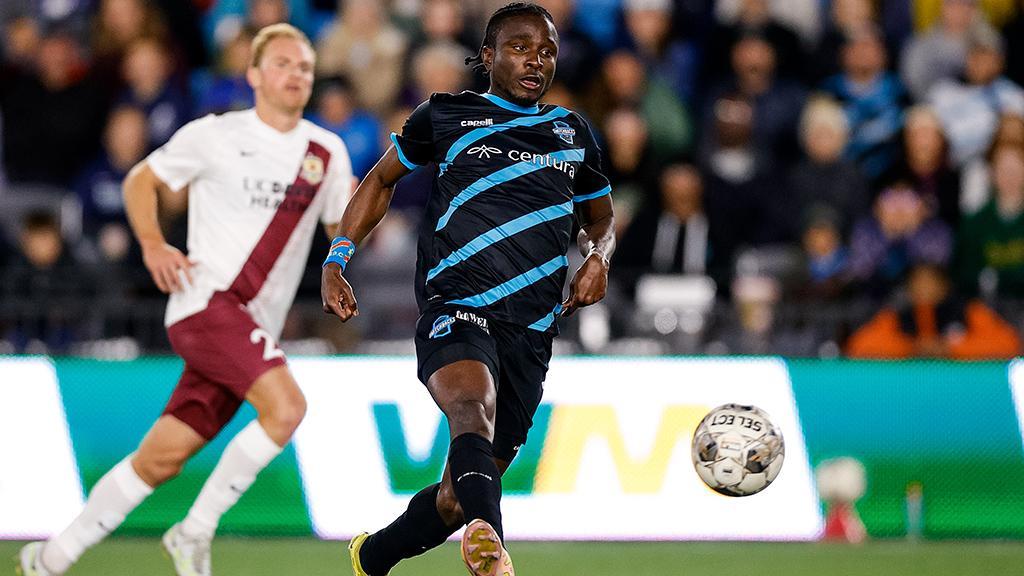 Over the past two seasons, there might not have been a player more electric with the ball at his feet than Colorado Spring Switchbacks FC’s Michee Ngalina.

His 143 completed dribbles across the regular season and playoffs are the most in the USL Championship across that span, his speed and willingness to take on allcomers a menace to opposing defenses.

On Saturday night, though, it was Ngalina’s awareness that delivered the biggest performance of his career so far.

A pair of goals, both created by incisive off-the-ball movement, helped send the Switchbacks past Sacramento Republic FC and into to the Western Conference Final of the 2022 USL Championship Playoffs presented by Hisense, a first for the club and the latest high-level moment delivered before another raucous crowd of 7,075 fans at Weidner Field.

“He's just special,” said Switchbacks Head Coach Brendan Burke. “That's the only word. There's a reason the whole locker room calls him Michee Burke, because I don't know what I'm going to do without that kid.”

Colorado Springs could have been in trouble when Republic FC took the lead in the 18th minute through Rodrigo Lopez on a sublime chip. Instead, Ngalina and his teammates got to work. There was an element of good fortune about his first good look of the game, his shifty run and pass in the penalty area caroming back to him off two defenders for a low shot that was well saved by Sacramento goalkeeper Danny Vitiello.

Seven minutes later, though, the awareness the 22-year-old possesses came to the fore. Opening a passing lane as he drifted from a central position into the left channel as the defense was drawn by Elvis Amoh’s run into the box, Ngalina was picked out perfectly by Zach Zandi and fired home a shot that was partially deflected but got its reward.

What can we say other than

He could have had a second before halftime, breaking a ragged Republic FC backline with an angled run that saw him get to the ball before Vitello just outside the penalty area, only for a last-ditch clearance by Dan Casey to keep the ball out. Midway through the second half, he linked up with Jairo Henriquez on a beautifully executed counterattack that was broken up by Casey, resulting in a penalty kick. Amoh couldn’t capitalize, but there seemed little that was going to deny Ngalina from finding a way to send his side through.

Six minutes into extra time, that moment arrived. A backdoor cut from the right and perfectly delivered pass by Steven Echeverria sprang Ngalina in on goal, and he made no mistake with the finish. Equaling his single-game high of eight shots – which also stands as the most by any Switchbacks player in the past two seasons – the Congolese winger delivered in impressive fashion.

“With Michee, you can put the ball almost anywhere on the field,” said Echeverria. “He’s so fast, just put it into space and let him chase it.”

What comes next is the challenge Ngalina and his teammates have yet to be able to solve. It’s been since March 23, 2019 since Colorado Springs claimed victory against San Antonio FC, its host for the Western Conference Final next Sunday night at Toyota Field. SAFC has won four in a row between the sides and is undefeated in seven. Stylistically, Colorado Springs will be in for a battle against one of the best teams the Championship has seen in its history.

After earning the opportunity at its first silverware in club history, the Switchbacks will look to meet the moment, with Ngalina in the spotlight once again.

“This is every bit the challenge you will face to win a title,” said Switchbacks goalkeeper Jeff Caldwell of his side’s win against Sacramento. “Now the plan is to replicate. San Antonio has a great team. You only have to look at what they accomplished in the regular season to see that they’re a great team. We’re a great team, so it’s going to be two great teams, and when you get two great teams, you get great games with trophies on the line.”