Playmakers have proven key to 901 FC, Rowdies with similar styles that put them in the middle of the action 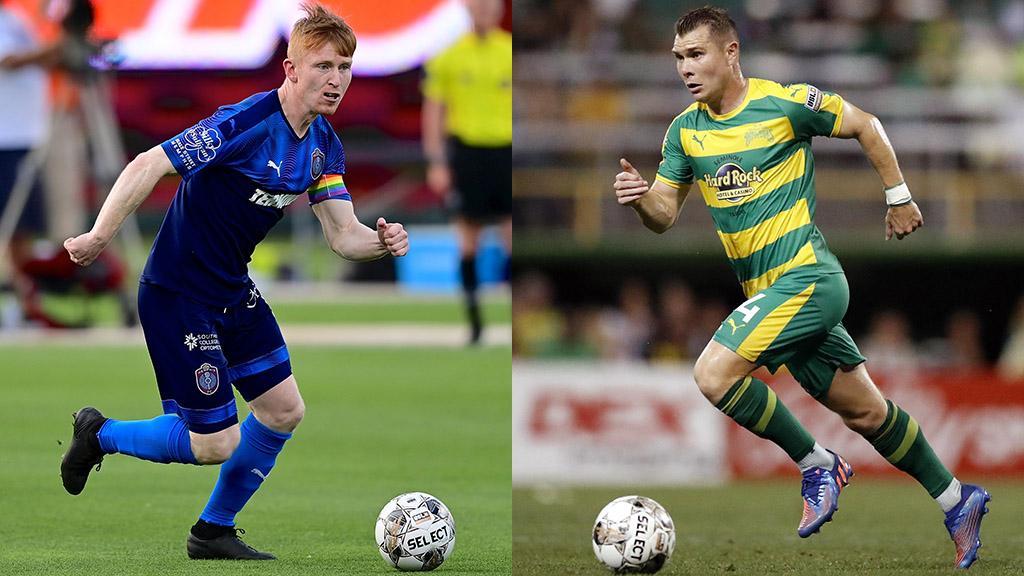 Central midfielders Aaron Molloy of Memphis 901 FC and Lewis Hilton of the Tampa Bay Rowdies are set to play key roles when their sides meet in the Eastern Conference Semifinals on Saturday night.

Look across the likely lineups for Saturday night’s Eastern Conference Semifinal between Memphis 901 FC and the Tampa Bay Rowdies and it might feel as much a series of heavyweight battles as two of the top teams in the USL Championship square off.

At one end of the field, there’s the potential for 901 FC striker Phillip Goodrum and winger Jeremy Kelly against Rowdies defenders Aaron Guillen, Conner Antley and their cohorts.

At the other, the rejuvenated Sebastian Guenzatti and Leo Fernandes for Tampa Bay squaring off against Graham Smith, Rece Buckmaster and a strong Memphis defense.

As much intrigue both those areas of the field present at AutoZone Park, the biggest spotlight could fall in the center of midfield, and two players who seem to have plenty in common when it comes to their influence game-in and game-out.

901 FC’s Aaron Molloy and the Rowdies’ Lewis Hilton check all the boxes.

Central passing cogs for their teams? Check. Hilton ranked 10th in the Championship with 1,761 passes attempted in the regular season, with Molloy one place behind him on 1,699. Meanwhile, Molloy’s 85.1 percent accuracy rate shaded Hilton’s of 85 percent.

Voracious ball-winners in the middle of the park? Molloy ranked second among outfield players with 258 recoveries in the regular season, while Hilton sat in 17th on 209. 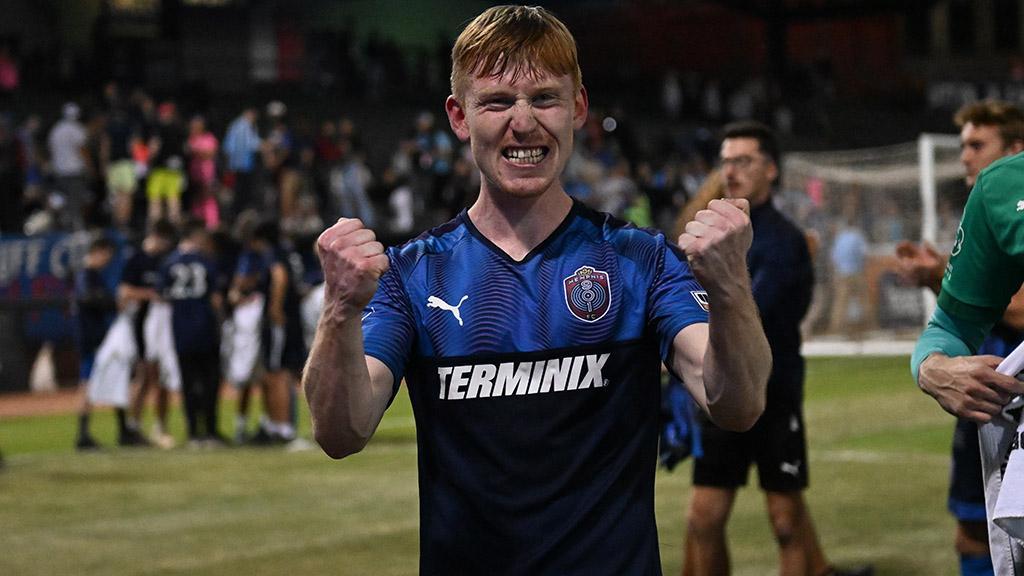 The parallels in the style both players bring to the field are striking, and while both in the main are focused inward on their role, there is an admiration from Molloy toward his more experienced counterpart.

“Hilton’s obviously a fantastic player and has been doing it for a lot longer than I have in the league,” said Molloy. “When he’s playing well, then obviously Tampa [Bay] are playing really well.”

Molloy’s impact for Memphis has been one of the major elements to the continuation of the club’s upward trajectory. After reaching the playoffs for the first time in 2021, 901 FC acquired Molloy among a raft of new arrivals that also included Goodrum, Smith, Buckmaster and Kelly. Returning to the Championship after earning nomination for Most Valuable Player in USL League One at Forward Madison FC last year, the Irish midfielder has delivered a stellar season, one he credits his teammates and environment in helping build.

“Every day in training the lads are fighting for spots to play on the weekends,” he said. “It’s just super-competitive. Everybody wants to play, training is very difficult because obviously guys want to play, spots are up for grabs, and when you make training that competitive and that good, when you go out and play it really reaps the rewards for gameday.” 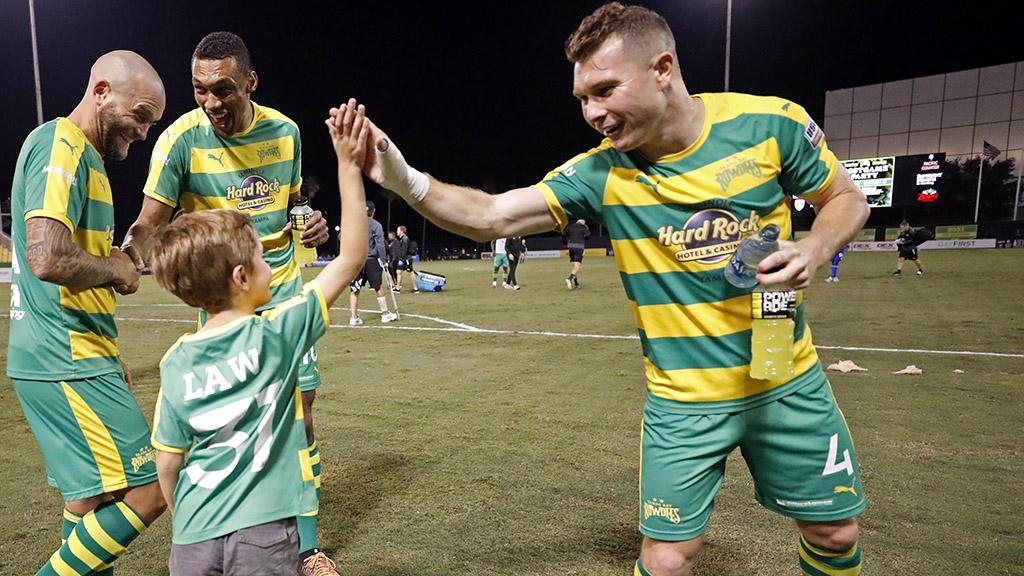 Lewis Hilton has been a central figure as the Tampa Bay Rowdies have claimed two consecutive Eastern Conference titles in the Championship, and recently passed 200 regular season appearances for his career. | Photo courtesy Matt May / Tampa Bay Rowdies

That collective depth in Memphis has been noticeable to Hilton. Now in his seventh season in the Championship and third with Tampa Bay, the 29-year-old passed 200 regular season appearances earlier this month and has been one of the leading playmakers in the league for numerous years. Since the league partnered with Opta prior to the 2017 campaign, Hilton ranks first in chances created from set pieces (178) and fifth in overall chances created (314) during the regular season.

As the Rowdies aim to return to the Eastern Conference Final for a third consecutive year, the challenge that Memphis poses is clear for the veteran Englishman.

“They've got a lot of good players, and I think there’s a lot of threats that we’ll have to be aware of,” said Hilton. “Going forward they have a lot of energy and they’re a good team all around. So, I wouldn’t say there’s maybe one or two players that stand out like maybe some other clubs. Their whole squad is really strong, and they play really well together as a team.”

That lends itself to what appears to be – according to fivethirtyeight.com – the most competitive of this weekend’s four Conference Semifinal contests. Memphis shades the predictor model at 52% chance to advance, but with each team having won on home turf in their two prior meetings this campaign the potential for a close, entertaining battle is evident.

“There’s no surprises coming into it,” said Hilton. “We know they’re a good team, and there’ll be a difficult environment. So, I think we’re doing the best we can this week to be fully prepared for it and be in the right mindset to hopefully get a good result on Saturday night.”

“From the start of the year in preseason we’ve worked to achieve these goals,” said Molloy. “We want to take it a step further. It was great being part of [Memphis’ first playoff win] against Detroit. They’re a very good team, they’re very strong, they’re very good players. Having that feeling of winning a playoff game is unmatched. We got a little taste of it, and we don’t want to let go. We want to get that again this Saturday.”

In a heavyweight contest with the season on the line, Hilton and Molloy will be in the center of the ring.