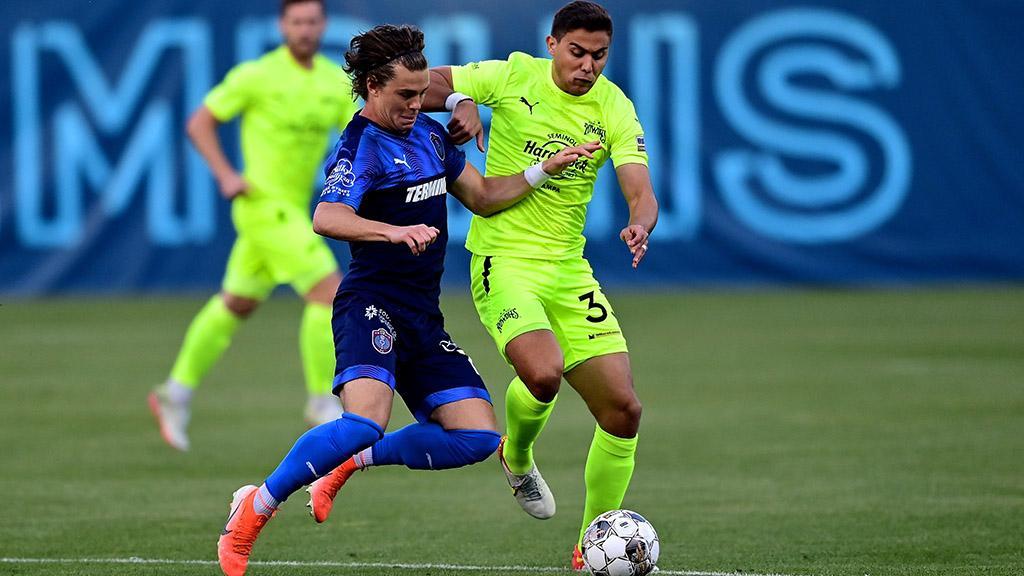 Memphis 901 FC's Phillip Goodrum and the Tampa Bay Rowdies' Aaron Guillen will hope to lead their sides to victory when they meet on Saturday night in the Eastern Conference Semifinals. | Photo courtesy Eric Glemser / Memphis 901 FC

MEMPHIS, Tenn. – Two-time defending Eastern Conference title winners the Tampa Bay Rowdies will head to face Memphis 901 FC in the first postseason meeting between two of the top four teams in the regular season as they square off in the Eastern Conference Semifinals of the 2022 USL Championship Playoffs presented by Hisense. Kickoff at AutoZone Park is scheduled for 8:30 p.m. ET and the game will air on ESPN+.

No. 2-seed Memphis claimed its first playoff victory in club history on Saturday night as a pair of late goals by Graham Smith and Phillip Goodrum pulled out a 3-1 result against Detroit City FC at AutoZone Park. In a closely fought contest, Smith delivered the winner with two minutes to go before Goodrum bagged his 22nd goal across the regular season and playoffs in stoppage time to seal the win for 901 FC. Memphis hosted Tampa Bay for its inaugural game in club history in 2019 and took victory when the teams met earlier this season at AutoZone Park as goals by Derek Dodson and Chris Allan lifted the side to a 3-1 win. Aiming for its first trip to the Eastern Conference Final, Memphis will look for a similar performance this time around as its defensive unit tries to contain the highest-scoring attack in the league.

That attack was on display again for the No. 3-seed Rowdies in their Conference Quarterfinals victory which saw the side advance with a 3-1 win against in-state rival Miami FC at Al Lang Stadium this past Saturday. Sebastian Guenzatti scored twice for Tampa Bay while Nicky Law provided the game-winner just before the hour-mark as the Rowdies won their seventh consecutive game against Eastern Conference opposition in the playoffs. Guenzatti’s two goals gave Tampa Bay’s captain five goals in the past four games, a welcome return to form for the veteran forward. The Rowdies claimed victory against Memphis when they last squared off at Al Lang Stadium on July 2 as Jake LaCava scored twice in the opening 20 minutes and with three goals having been scored in the opening five minutes by the clubs across their two meetings this season it could spell another fast start this time around.

17 – Memphis 901 FC has recorded 17 headed goals this season, the most of any team in the Championship this season, despite sitting tied for 14th in the league in successful crosses.

3 – The Tampa Bay Rowdies have conceded only three headed goals defensively while only allowing two goals off corner kicks, both second-fewest in the league so far this season.

Memphis 901 FC – Graham Smith: The veteran center back showed his value at set pieces against Detroit, but his overall consistency will be key as the hosts try to contain Tampa Bay’s attack.

Tampa Bay Rowdies – Lewis Hilton: The experienced midfielder leads the Rowdies with 59 chances created this season while serving as a key two-way player with a potential matchup against counterpart Aaron Molloy one to watch closely.