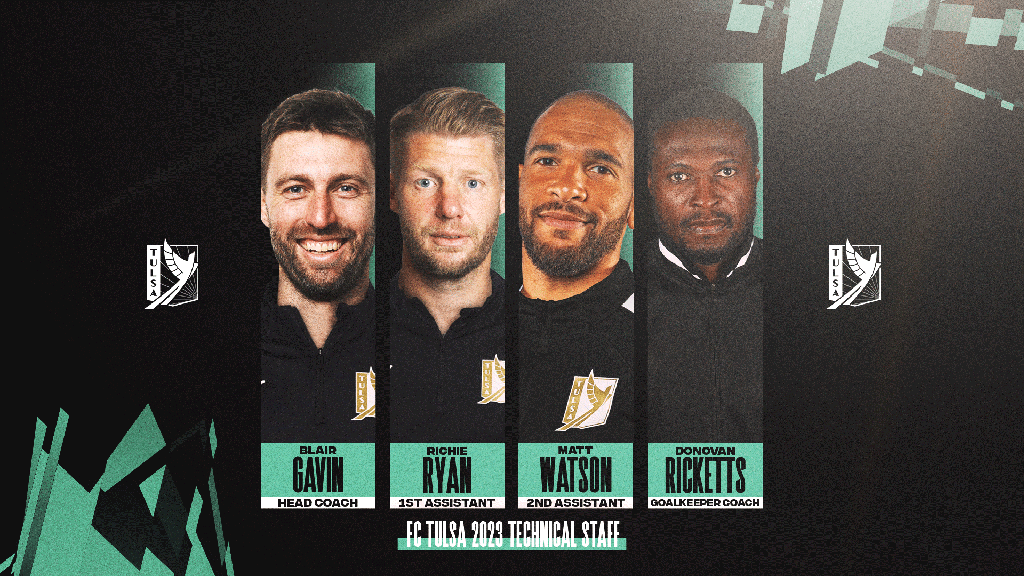 TULSA, Okla. – FC Tulsa and Head Coach Blair Gavin announced on Tuesday the coaching staff that will join the club’s new Head Coach for the 2023 USL Championship season, adding Richie Ryan as Gavin’s First Assistant and Matt Watson as Second Assistant. The club also announced Donovan Ricketts will return as the club’s Goalkeepers Coach, having served as interim Head Coach at the conclusion of the 2022 campaign.

Ryan joins FC Tulsa following a playing career that spanned 19 seasons, most recently with El Paso Locomotive FC this past Championship season. Originally from Templetuohy, Ireland, Ryan kicked off his career with Sunderland A.F.C. of the Premier League and went on to play in top-flight league sin Ireland, Scotland, and Belgium before making the move to North America in 2014. Ryan then spent nine seasons between Ottaway Fury FC, Jacksonville Armada FC, Miami FC, FC Cincinnati, and El Paso Locomotive FC before hanging up the cleats and grabbing the clipboard.

“Richie has shown incredible leadership throughout his time playing and has left a lasting impact everywhere he has been,” said Gavin. “His unique character plus understanding of the game will provide a massive asset to our club for years to come.”

Ryan’s extensive resume includes two Irish Cup wins in addition to an Irish League Cup title. In total, Ryan amassed more than 450 appearances and nearly 34,000 minutes on the pitch dating back to 2002.

“I am extremely grateful to Sam, Blair, and FC Tulsa for giving me this opportunity to start my coaching career,” said Ryan. “I am excited to work with such a talented group of players and staff. My family and I are looking forward to making the city of Tulsa our new home.”

Watson brings 13 years of combined soccer experience between his time in the United States and Canada, including more than 100 regular season and playoff appearances in the USL Championship. Watson joins FC Tulsa from Indy Eleven where he played from 2018-2020 and served as Indy’s Director of Youth Development & Club Liaison in 2022.

“Matt is an amazing person who cares deeply about player development,” said Gavin. “His analytical detail will provide significant gains for all our players to benefit and will help the club find any competitive advantage that others may not notice.”

In addition to his time with Indy Eleven, Watson spent six seasons with North Carolina FC, four seasons with the Vancouver Whitecaps and Chicago Fire of Major League Soccer, and one season with Phoenix Rising FC in 2017.

“I’m really excited to join FC Tulsa and help push the team forward while growing the game in the local community,” said Watson. “The opportunity to work with Blair and Richie and be part of a progressive organization is huge for me. Having played and spent time with Blair, I can’t say enough good things about who he is as a professional and I’m grateful to be a part of his journey as he takes the natural next step forward.”

Ricketts remains on the staff having initially joined the club in 2018 as the Goalkeepers Coach. The former Jamaican international led Tulsa to an 8-8-3 record while at the helm and accounted for 65% of Tulsa’s point total in 2022.

“Donovan has a unique ability to connect with players and give them the tools to be successful,” said Gavin. “His proven track record of developing talent paired with his tenure at the club will provide invaluable lessons for onboarding into the culture of FC Tulsa.”

As a player, Ricketts was both an MLS and Jamaican National Team legend from his time between the posts. A two-time MLS Goalkeeper of the Year and a 2011 MLS Cup winner with the LA Galaxy, Ricketts is regarded by many as one of the best goalkeepers in league history. On the national stage, Ricketts was capped more than 80 times for Jamaica and competed for his country in the 1998 FIFA World Cup.