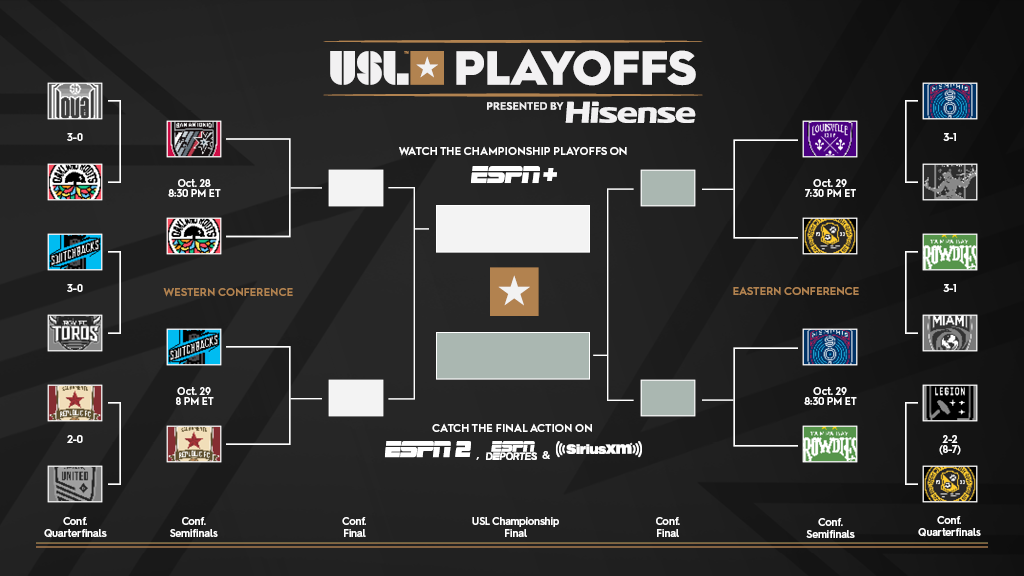 TAMPA, Fla. – The 2022 USL Championship Playoffs, presented by Hisense, continue next weekend with the Conference Semifinals across two nights of action that will kick off on Friday, October 28 and conclude on Saturday, October 29, with all four games to be streamed live on ESPN+.

The eight remaining teams will continue the journey to the 2022 USL Championship Final, which will air at the new time of 8:30 p.m. ET on Sunday, November 13 on ESPN2, ESPN Deportes and SiriusXM FC (Ch. 157).

After receiving byes as the No. 1 seeds in their respective conferences, San Antonio FC and Louisville City FC will begin their bids to claim the league title, with San Antonio set to host No. 7 seed Oakland Roots SC on Friday night at 8:30 p.m. ET at Toyota Field. Twice previously a title winner, LouCity will square off with No. 5 seed Pittsburgh Riverhounds SC on Saturday night at 7:30 p.m. ET at Lynn Family Stadium as it looks to become the first team in Championship history to earn three stars above its crest.

Oakland advanced as an underdog for a second consecutive postseason as it took a 3-0 victory against No. 2 seed San Diego Loyal SC on Sunday night as Lindo Mfeka notched a goal and assist at Torero Stadium to earn a trip to San Antonio. The other side of the Western Conference bracket will bring together No. 3 seed Colorado Springs Switchbacks FC and No. 4 seed Sacramento Republic FC, each of which advanced with shutout victories on home turf to set up a first postseason meeting between the clubs at Weidner Field.

The Hounds claimed the game of the weekend on Sunday night to advance past No. 4 seed Birmingham Legion FC before a Legion FC record crowd of 10,277 fans at Protective Stadium as Edward Kizza scored twice to pull the visitors level and then notched the decisive finish in the 10th round of a penalty shootout after the game ended all square after 120 minutes.

On the other side of the Eastern Conference bracket, No. 2 seed Memphis 901 FC will play host to the No. 3 seed Tampa Bay Rowdies after both sides advanced at home on Saturday night. A pair of late goals by Graham Smith and Phillip Goodrum sent Memphis to its first playoff victory in club history with a 3-1 result against Detroit City FC, while Sebastian Guenzatti continued his late-season resurgence for Tampa Bay with two goals in a 3-1 win against Miami FC at Al Lang Stadium.