The X-Factor Players in the 2022 USL Championship Playoffs

Which under-the-radar players could prove essential to their club’s chances of lifting the title? 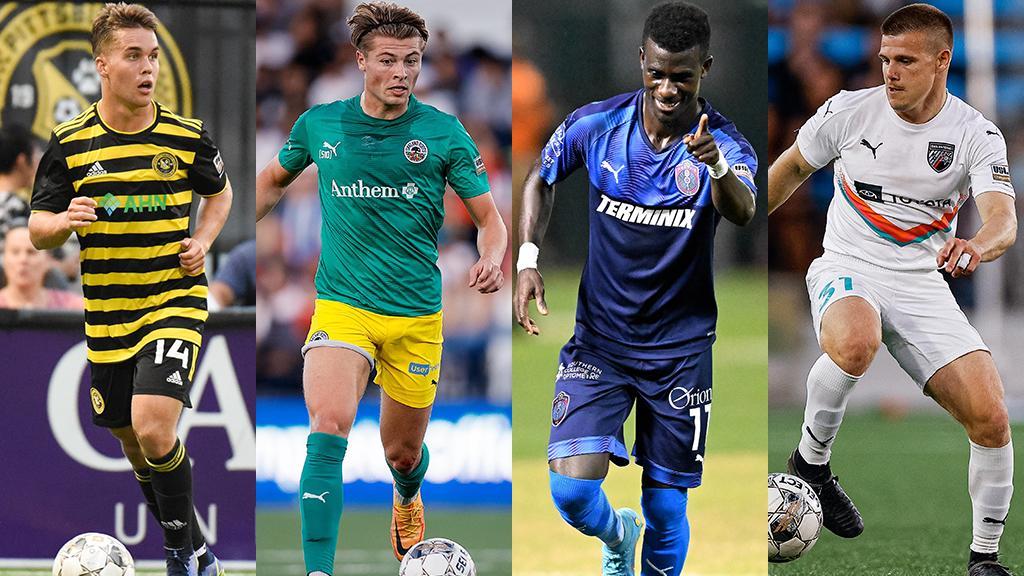 “You need your best players to play their best when their best is needed.” – Jeff Van Gundy, ESPN / New York Knicks Head Coach

When it comes to claiming a title, it’s hard to argue with.

As the 2022 USL Championship Playoffs presented by Hisense open this weekend, the players with the biggest spotlights will have crucial roles in whether their clubs rise to claim silverware or fall by the wayside.

It’s never just one player, though, and while there have been standout performers across all 14 teams in this year’s postseason, there are others that might have flown a little below the radar when it comes to their potential importance.

We’ve picked out a player from each squad that could have a major impact on their club’s fortunes as the postseason builds toward next month’s Final.

San Antonio FC – Connor Maloney: There might have been some players who grabbed bigger headlines for the No. 1 seed in the Western Conference, but Maloney has been the side’s Swiss Army Knife and an essential part of its success. The 27-year-old finished tied for second in the Championship with 57 tackles won at a success rate of 65.5 percent and ranked in the top 15 among outfield players in recoveries (222), interceptions (58) and duels won (182) while showing off his versatility with starts at four different positions.

San Diego Loyal SC – Evan Conway: The Wisconsin native wasn’t SD Loyal’s most prolific scorer in his first season in the Championship, but over the course of the campaign he developed a knack for finding the net when it mattered most. Four of Conway’s nine goals came in the final 15 minutes of games, including game-winners on the road against Tampa Bay, Colorado Springs and Orange County, a trait that could be very useful for Head Coach Landon Donovan’s side this postseason.

Colorado Springs Switchbacks FC – Jairo Henriquez: The El Salvadoran international made a solid impact on Colorado Springs’ lineup since his arrival in July, and with the departure of Hadji Barry late in the season to Egypt, he’ll be key to the Switchbacks’ success in the final third. He’s averaged a goal or assist every 115.3 minutes (3 goals, 4 assists in 807 minutes), but it’s going to be important Henriquez stays engaged in the game – he only recorded 10 chances created in his 12 appearances.

Sacramento Republic FC – Jack Gurr: The midfield depth Sacramento possesses might be its most important attribute this postseason, but the quality Gurr brings on the right flank is going to be essential for the 2014 title winners at both ends of the field. The 26-year-old led the Championship with 35 completed open-play crosses in the regular season and had nine Big Chances Created, while defensively he recorded 37 interceptions to sit third on the team with a +4.86 Goals Added mark.

New Mexico United – Cristian Nava: We’re going full vibes here. There might be a question as to how much action the NMU Academy product might see this postseason, especially considering his absence prior to the final game of the regular season due to injury. If New Mexico needs a spark of any kind, though, Nava could be the player to deliver it. This past Saturday’s goal against Colorado Springs showed what he can bring, and United’s fans would be thrilled to see it happen.

Rio Grande Valley FC – Christian Pinzon: One of the major midseason pieces added to the Toros squad, Pinzon helped drive the side toward the postseason as he notched seven goals and two assists across a seven-game run through the end of September. The 24-year-old has cooled off a little since then, but if the Toros are going to make a run this postseason the California native will almost certainly be in the middle of the action.

Oakland Roots SC – Charlie Dennis: Going by the numbers, Dennis was one of the unluckiest playmakers in the Championship this year. He officially recorded two assists but finished sixth in the league with an Expected Assists mark of 6.96xA on 55 chances created according to Opta. That level of creativity is going to be essential for Oakland if Roots SC is going to spring another surprise this postseason as the No. 7 seed.

Louisville City FC – Amadou Dia: Going into the season it felt like Dia checked all the boxes LouCity was looking for as its new left-sided defender. The veteran has delivered exactly what was expected, leading all defenders with 13 Big Chances Created and notching a team-high eight assists while winning 29 of 39 tackles and recording 37 interceptions. Add in his prior playoff experience and the 29-year-old could be a major difference-maker as Louisville pursues its third title.

Memphis 901 FC – Laurent Kissiedou: One of the essential parts of last year’s 901 FC playoff side, Kissiedou has provided important secondary scoring and creativity in the final third for Memphis in his second season at the club. The 23-year-old has scored a career-best seven goals this season and connects as an ideal foil for players like Aaron Molloy and Phillip Goodrum.

Tampa Bay Rowdies – Sebastian Guenzatti: It might seem a bit odd to call someone who was an All-League selection last year an X-Factor this postseason, but the resurgence Guenzatti has shown after struggling to find the net for most of the campaign is exactly what Tampa Bay needed going into the postseason. The 31-year-old has always done the work – his +5.82 Goals Added mark ranks fifth on the team this season – but add his scoring touch and you’ve got a potential game-changer.

Birmingham Legion FC – Prosper Kasim: One of Legion FC’s originals, Kasim has had a career-best regular season with eight goals and five assists, providing back-up to new arrival Enzo Martinez in the attacking third. With two goals and one assist previously in the postseason, the 25-year-old has shown up when it matters most before and will need to if Legion FC is to advance further than the Conference Semifinals for the first time.

Pittsburgh Riverhounds SC – Robbie Mertz: When Riverhounds SC brought back Robbie Mertz from Atlanta United 2 midway through the season, the hope was the Pittsburgh native would not only maintain the form he’d shown in Atlanta but quickly rebuild the chemistry he had previously at Highmark Stadium with the likes of Kenardo Forbes. It hasn’t quite turned out that way – Mertz has one goal and three assists in 14 appearances for the Hounds – but the 25-year-old is still a potential game-changer with 17 goals and 22 assists in 107 career Championship appearances.

Miami FC – Joaquin Rivas: The veteran forward arrived in Miami after a midseason move from FC Tulsa and has had a solid impact on the South Florida club’s attack, logging four goals, three assists and 24 chances created across 17 appearances. Rivas’ experience in the Championship and with El Salvador is a plus, and he’s scored in each of the past two postseasons, a run Miami would certainly like to see continue.

Detroit City FC – Nathan Steinwascher: One of Le Rouge’s longstanding figures, Steinwascher has been crucial to the club’s regular season success. He allowed only 29 goals in 33 appearances on an Expected Goals on Target Conceded mark of 36.91xGA. That’s the sort of play that if replicated in the playoffs can change a game for a team and give DCFC a chance to deliver an upset in its first Championship Playoffs appearance.