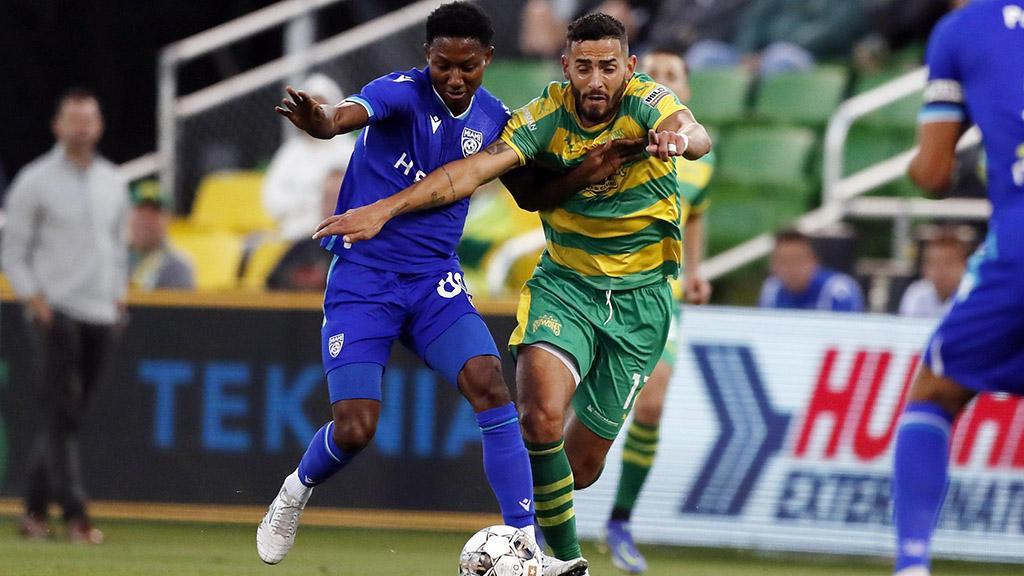 The Tampa Bay Rowdies' Leo Fernandes and Miami FC's Speedy Williams could both feature prominently in the Sunshine State clash between their sides on Saturday night. | Photo courtesy Matt May / Tampa Bay Rowdies

ST. PETERSBURG, Fla. – Florida rivals the Tampa Bay Rowdies and Miami FC will meet for the first time in postseason action on Saturday night as they square off in the Eastern Conference Quarterfinals of the 2022 USL Championship Playoffs presented by Hisense at Al Lang Stadium at 7:30 p.m. ET.

No. 3-seed Tampa Bay begins its bid to claim the Eastern Conference title for a third consecutive season in positive form, with the side on a four-game winning streak after a 1-0 victory against the New York Red Bulls II this past Saturday night. Leo Fernandes scored the only goal of the game for the side at Al Lang Stadium, moving him to a career-best 19 goals in the regular season, and has recorded four goals and two assists over the course of the Rowdies’ winning streak. Tampa Bay is undefeated in its last 12 outings on home turf, a run that began in May with a 3-1 victory against Pittsburgh Riverhounds SC, and recorded a league-high 73 goals in the regular season, which also ranked fourth all-time in a regular season in league history.

No. 6-seed Miami FC, however, was one of two teams that took victory on the road against the Rowdies early in the season, with its 1-0 victory at Al Lang Stadium the first road victory in the series for the South Florida club against its biggest rival. Pierre Da Silva scored the only goal that night, with the result serving as part of an impressive road record that saw Miami win 10 times away from home this season. Miami enters its second consecutive postseason appearance on the back of a 1-0 victory on the road against Detroit City FC that saw Joaquin Rivas score the only goal and the side post its 17th shutout of the season, tied for both this season’s league-lead with San Antonio FC and the Championship’s single-season record. After falling narrowly in its postseason debut last year at Louisville City FC, Head Coach Anthony Pulis side will be hoping to foil the Rowdies’ bid for another season with silverware and move on to the Conference Semifinals.

40 – The Rowdies scored 40 goals of their 73 goals in the first half of games in the 2022 regular season, including 21 goals in the final 15 minutes of the half, the most in a 15-minute segment by any team during the campaign.

23 – Miami FC is undefeated in the last 23 games in which it has held a halftime lead dating back to the 2021 season, including going 11-0-4 this season. The last time Miami fell when holding a halftime lead was on June 6, 2021 against Rio Grande Valley FC.

Tampa Bay Rowdies – Leo Fernandes: The Most Valuable Player candidate led the Championship with 28 combined goals and assists (19 goals, 9 assists) in the regular season and has been central to the club’s success in the final third.

Miami FC – Paco Craig: The two-time title winner at Louisville City FC has remained one of the best all-around defenders in the league this season, posting a +6.46 Goals Added mark that ranks third among center backs.