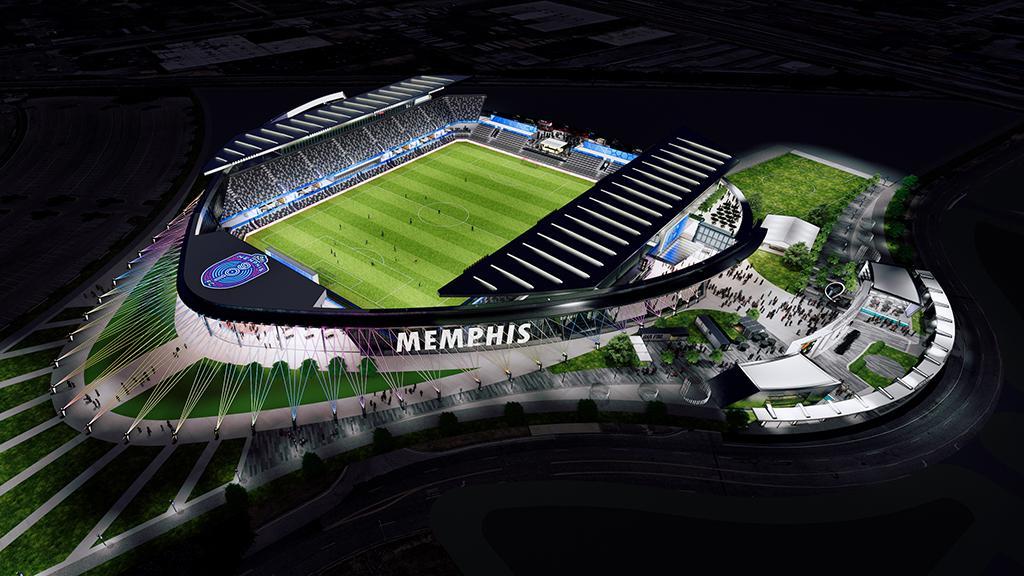 A rendering of the proposed 10,000-seat venue that will become the permanent home of Memphis 901 FC in the city's Liberty Park for the 2025 USL Championship season.

MEMPHIS, Tenn. – Memphis 901 FC and the City of Memphis announced on Tuesday plans to construct a new 10,000-person, soccer specific stadium within Liberty Park that will serve as the new permanent home for the USL Championship club.

The facility is being designed by Odell Sports & Entertainment Studio, architects to numerous iconic stadiums, arenas, and sports complexes across the United States, and locally by LRK. By design, the 901 FC Stadium will first and foremost, pay homage to the Coliseum and tie into Memphis’ rich music history. The stadium will feature 7,500 fixed seats, plus suites, clubs and large covered gathering spaces for viewing parties and special events. The new stadium will also be able to host outdoor concerts, large scale events and other long-field sporting events. The new home for Memphis 901 FC is planned to open in time for the 2025 USL Championship season and a year prior to the 2026 FIFA World Cup being hosted by the United States, Mexico and Canada.

“When we launched our football club in 2019, we had two dreams. The first was to compete at the highest level and win a USL Championship. Today, we are proud to be in the playoffs for our second consecutive season, this time as the second seed,” said 901 FC Sporting Director Tim Howard. “The second goal was to build a proper soccer stadium with a world class pitch for our club that rivals that of Louisville or any of the great new venues being built in the United States and Europe for soccer. Today we move closer to that dream.”

In addition to the new stadium at Liberty Park, 901 FC will invest in two state of the art soccer fields adjacent to the site which will serve as the training home for 901 FC along with potential academy and USL League Two clubs and a women’s professional team.

Tickets for Memphis 901 FC’s first home postseason match are currently available as the club faces Detroit City FC in the Eastern Conference Quarterfinals of the 2022 USL Championship Playoffs presented by Hisense on Saturday night at 8 p.m. ET at AutoZone Park.