Currently in his second season with United, Swartz’s two-goal performance was his first in the professional ranks and moved him to six goals this season for the club. With New Mexico trailing at the halftime break against Los Dos at Isotopes Park, the Massachusetts native struck first in the 49th minute with a beautiful finish on a give-and-go with Armando Moreno that was nominated for the Championship’s Goal of the Week award on Monday and then added a second five minutes later. That proved to be the winner in a 3-2 victory that sealed New Mexico’s third postseason trip in four seasons.

Martinez earned 50 percent of the ballot to claim the award. The Tampa Bay Rowdies’ Leo Fernandes finished second on 42 percent after recording three goals in two games to lead the two-time Eastern Conference title winner to victories against El Paso Locomotive FC and the New York Red Bulls II to wrap up the regular season. 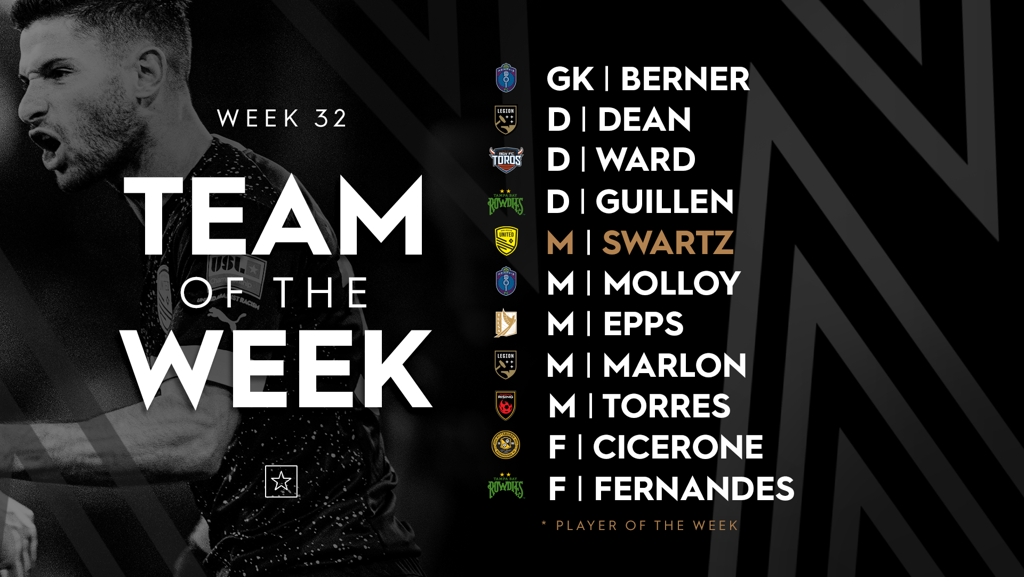 GK – John Berner, Memphis 901 FC: Berner posted a four-save shutout as Memphis claimed the No. 2 seed in the Eastern Conference with a 3-0 victory on the road against FC Tulsa on Saturday night.

D – Akeem Ward, Rio Grande Valley FC: Ward scored once and had two shots overall while completing 50 of 54 passes and winning 2 of 2 duels as Rio Grande Valley clinched a playoff berth with a 4-1 victory against Monterey Bay F.C. on Saturday night.

M – Harry Swartz, New Mexico United: Swartz recorded a pair of goals to lead New Mexico to a 3-2 victory against the LA Galaxy II on Wednesday night that clinched the club’s return to the postseason, while also notching two chances created and winning 9 of 11 duels.

M – Marcus Epps, FC Tulsa: Epps recorded his first two-goal game in the Championship to lead Tulsa to a 2-0 victory against Monterey Bay F.C. on Wednesday night and ended the game with four shots overall while winning 2 of 2 tackles and 2 of 3 aerial duels and completing 34 of 45 passes.

M – Marlon, Birmingham Legion FC: Marlon scored once, and had three shots and three chances created in Legion FC’s 3-1 victory against Indy Eleven on Wednesday night that sealed a top-four finish in the Eastern Conference while winning 10 of 15 duels defensively.

M – Gabriel Torres, Phoenix Rising FC: Torres recorded a goal and assist as Phoenix wrapped up its campaign with a 3-1 victory against Atlanta United 2 on Saturday night while also notching two chances created, winning 3 of 3 tackles and 4 of 6 duels, and completing 29 of 37 passes overall.

F – Russell Cicerone, Pittsburgh Riverhounds SC: Cicerone notched a goal and assist as the Hounds rallied from an early deficit to take a 3-1 victory against Oakland Roots SC at Highmark Stadium on Saturday, sealing a fifth-place finish in the Eastern Conference.