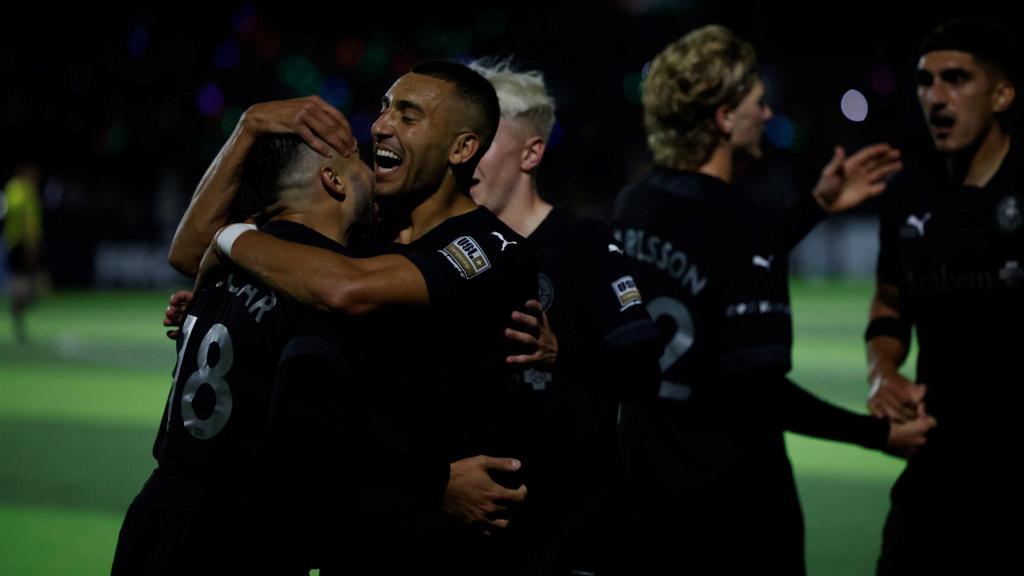 What a week for the teams chasing the remaining playoff spots in the Western Conference. Remarkably, with just a couple weeks to go in the USL Championship regular season, only Orange County SC has been eliminated from playoff contention. Phoenix Rising FC and LA Galaxy II face long odds, but they both beat Sacramento Republic FC this week to prolong the fight. Phoenix — which had just nine wins in 30 matches this season — won twice in four days!

The Race to the Playoffs presented by Hisense just keeps getting tighter and harder to predict.

If you want to win the USL Championship Final, you’re going to have to win a game at Toyota Field in San Antonio. SAFC clinched home-field advantage throughout the postseason with a 1-0 win on the road against Pittsburgh Riverhounds SC, while Memphis 901 FC also dropped points on the road in Miami.

San Antonio (23-5-4) now stands at 73 points with two matches left to play: at Birmingham Legion FC and home against Orange County SC. This 2022 San Antonio FC squad already has one of the best regular seasons in league history, but if it wins those final two games, it will set records for points in a regular season (Phoenix’s 78 in 2019) and wins in a season (Phoenix’s 24 in 2019).

The win Saturday night in Pittsburgh wasn’t the most dominant we’ve seen this season, with Carter Manley scoring the only goal of the game in the 86th minute, but it came without a handful of key contributors on the field. Mitchell Taintor and Shannon Gomez both missed the match through suspension, while Justin Dhillon, Santiago Patino and Jasser Khmiri were all held out due to injury. Yet, the machine kept rolling.

“[I’m] Incredibly proud of the collective,” Head Coach Alen Marcina said. “[The] guys have broken a number of different records over the course of the season. Incredibly proud of all of them. We had a number of guys that haven’t gotten many minutes that stepped up big. Yes, we can be honest with ourselves – it wasn’t our best performance, but you have to find ways to win and the guys did tonight.”

After last weekend’s feisty meeting between Louisville City FC and Memphis 901 FC, which saw Memphis take control of the Eastern Conference with a 1-0 win, both teams headed into their tricky Week 30 matches short-handed. Memphis had three players suspended for a visit to The Miami FC, while Louisville would be without two for a trip to South Texas to take on Rio Grande Valley FC.

Louisville persevered and snapped RGV FC’s four-game winning streak with a 1-0 win in a resilient performance at H-E-B Park. The teams were relatively even statistically, and the margin was narrow, but LouCity showed its class to earn its 20th win of the season for the first time in club history. Wilson Harris scored the only goal of the match in the 32nd minute and Louisville held on to reassert itself in the Eastern Conference.

“I know I’ve said it before, but I couldn’t be prouder of the group,” said Head Coach Danny Cruz. “We changed our shape. We’ve had a lot of injuries and suspensions, obviously. To go out there and do exactly as we’ve worked on all week was fantastic. I thought the intensity and mentality from the group was exactly where it needed to be.”

If Louisville closes the season with home victories over Detroit City FC and Hartford Athletic, the Eastern Conference playoffs will run through Lynn Family Stadium.

Coming into the week, Oakland Roots SC, Las Vegas Lights FC, Monterey Bay F.C., LA Galaxy II and Phoenix Rising FC were all below the playoff line in the West but not yet mathematically eliminated. How did they respond?

Apart from Monterey Bay — more on them later — all the chasing teams had really good weeks.

Below the top four of San Antonio, San Diego, Colorado Springs and Sacramento, the West is total chaos right now. The regular season ends in 13 days and we still have seven teams fighting for the last three playoffs spots. Fifth and 12th are separated by five points in October. It’s madness!

Sacramento Republic FC clinched a playoff spot this week, though not from its own positive results. The Republic lost at home to Phoenix in a shocker on Wednesday night and then followed that up by laying an egg in a 2-0 loss to an LA Galaxy II side that played a man down for nearly an hour on Sunday night.

Things do not look good right now for Sacramento, which has lost three straight games without scoring a goal. New Mexico trails Sacramento by five points but does have a game in hand.

A week ago, it looked like Sacramento was ready to leapfrog Colorado Springs for the No. 3 seed in the West. Now it looks more likely that Sacramento will fall to fifth and lose the right to host a game in the Western Conference Quarterfinals. Sacramento’s remaining two matches are both against playoff teams, with Pittsburgh Riverhounds SC and San Diego Loyal SC scheduled to visit Heart Health Park.

We know how good Sacramento can be. It didn’t get to the Lamar Hunt U.S. Open Cup Final by accident. Still, there are some worrying signs from the Republic with the regular season winding down. The Republic hasn’t scored in 315 minutes, a streak that could have ended with a consolation goal in stoppage time Sunday night, had Maalique Foster’s penalty kick not hit the post. Yeah, it’s that kind of luck for Sacramento right now.

5. Oakland fights back to get above the line

Oakland played its regular season home finale Saturday night in an amazing night at Laney Football Stadium. The match was sold out, new minority owner G Eazy performed with the Oakland Symphony, Youth Orchestra and Chorus, and even Lil B was in the crowd.

It was all good until Birmingham Legion FC’s Enzo Martinez scored an ugly goal through traffic in the 21st minute to bring reality crashing down. Oakland started the match below the playoff line and a loss would have been devastating.

Not even three minutes later, Ottar Magnus Karlsson came to the rescue, scoring his 18th goal of the season to bring Roots SC level. Still, Oakland needed a win to boost its chances of reaching the postseason.

Oakland had to wait until the 85th minute, when Memo Diaz’s delicate crossed was nodded home by Juan Azocar for a late winner, lifting Roots SC above the playoff line. The good vibes were restored.

Oakland now heads to the East Coast to close the season with matches in Pittsburgh and Hartford, an interesting finish while the teams in the West play against one another.

Detroit City FC looked good in a 4-0 romp over Loudoun United FC in a downpour at Segra Field. Le Rouge would have been favored to win the game, but after being held to draws by both New York and FC Tulsa last week, this became a really important match for Detroit.

After Yazeed Matthews opened the scoring in the 8th minute, Maxi Rodriguez went on to score in the 41st, 66th and 70th minutes to notch a hat trick in a confidence-restoring victory.

The victory, paired with losses by Birmingham and Pittsburgh, brings Detroit to fifth place and within two points of finishing in the top four and opening the playoffs at Keyworth Stadium.

Detroit is now on a seven-game unbeaten run and hasn’t loss since August 20, a 1-0 loss to Louisville. Up next? A rematch against Louisville on Wednesday night. That one should be exciting.

7. The Miami FC continues to quietly rack up results

Miami’s 1-0 win over Memphis on Saturday night comes with an obvious asterisk. Memphis was without three regular starters in Laurent Kissiedou, Phillip Goodrum and Rece Buckmaster, all suspended for the visit to South Florida.

Still, you can only play against the players on the field and Miami beat those players. The score line is tighter than the match was. Miami didn’t score until Adonijah Reid’s winner in second-half stoppage time, but Anthony Pulis’ side won the possession battle and outshot Memphis 12-5. Nine of those shots were on target. If not for a heroic performance in net from Memphis goalkeeper Trey Muse, this match would have been very lopsided.

“I thought it was an excellent performance tonight from start to finish,” Pulis said. “I thought we controlled large parts of the game, very similar to the last few home games where we dominated possession and moving it really well and getting into really good areas.”

The result extended Miami’s unbeaten run to eight games. Miami hasn’t lost since August 10. The team is now just three points short of Birmingham in fourth place. Intriguing visits to Las Vegas and Detroit remain on the schedule. A home game in the Eastern Conference Quarterfinals is not out of the question.

8. Welcome to the Luca show

FC Tulsa will not reach the postseason this year. While that’s disappointing for a franchise in transition, with new President Sam Doerr joining midseason and Blair Gavin set to take over as Head Coach next season, it’s given Tulsa the chance to try some new faces and plan for the future.

Enter 18-year-old striker Luca Sowinski, who signed his first professional contract in July and made his first appearance in a 2-2 draw at Detroit a week ago. Saturday night he scored a hat trick in his second career start as Tulsa defeated the Indy Eleven 4-2. Sowinski scored with both feet in an incredible performance that betrayed his youth.

Would Sowinski be playing if Tulsa was still in the hunt for a playoff berth? Maybe, maybe not. Either way, Tulsa is making the most of this opportunity to play matches with no pressure and appears to have found a gem.

It was a difficult week for the Rowdies. An evacuation from Hurricane Ian forced the team to Florida’s east coast and canceled training sessions. A match originally scheduled for Saturday night on the road against Monterey Bay F.C. had to get moved to Sunday night because of travel difficulties.

Tampa Bay eventually arrived on the west coast after a stressful week without much practice under its belt. The match kicked off and the Rowdies didn’t look ready. Monterey Bay hammered the Rowdies to the tune of nine shots on target in the first half. Tampa Bay was lucky to trail just 1-0 at the interval.

Head Coach Neill Collins rolled the dice with three substitutions at halftime. In the 51st minute, one of those fresh players, Nicky Law, fired a shot off the underside of the crossbar to level the score. Sixteen minutes later, the Rowdies found themselves ahead 2-1 courtesy of Lawrence Wyke.

The margin held to the end of the night, snapping a four-game losing streak away from home. You have to commend the heart the Rowdies showed to earn a come-from-behind win after a very long week. Leo Fernandes’ late red card is a disappointment, but the Rowdies now look unlikely finish lower than third in the Eastern Conference.

On the flip side, you have to mention how disappointing this week was for Monterey Bay F.C., which had been on a five-game unbeaten run coming into the week as it tried to earn a surprise playoff berth in its inaugural season.

Unfortunately, this week really didn’t go to plan. First, the Union was humbled in a 4-0 loss in Las Vegas on Tuesday night. Then, it let a halftime lead slip away against the Rowdies as it was left to ponder how it managed to score just once in such a dominant first half.

Now, the picture looks pretty bleak for Monterey Bay, which sits three points below the playoff line with just two matches remaining. It’s not over yet, but it’s hard to see how Monterey Bay will overcome this bad week.