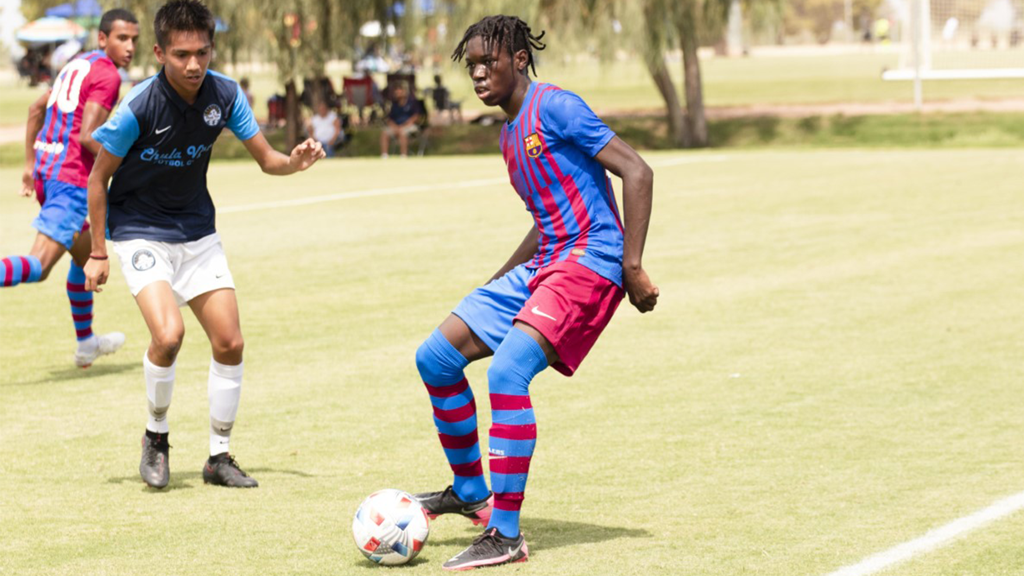 IRVINE, Cal. - Orange County Soccer Club has announced the signing of 16-year-old Barca Residency Academy forward Bryce Jamison, one of the top-ranked U-17 players in the United States to a multi-year contract.

An Atlanta, Georgia native, Jamison joins the Orange and Black from the famed Barcelona Residency Academy in Casa Grande, AZ, where he played alongside current OCSC forward Korede Osundina and appeared for their highly successful U-17 and U-19 sides.

“Bryce is a statement signing for the club and a testament to the progress we have made as an organization," said OCSC President of Soccer Operations, Oliver Wyss. "Signing a player of Bryce’s caliber validates our significant investment in our professional pathway and shows that we continue to strive to be at the forefront of player development in the US.”

Jamison was highly impressed with the current “Pathway to Pro” program that OCSC has successfully laid out for its players. By inking this contract, he aims to follow in the footsteps of former OCSC players now in Europe like defender Kobi Henry, forward Ronaldo Damus and goalkeeper Aaron Cervantes.

“We are delighted to sign Bryce, he is an elite level youth prospect, and one of the most exciting players within his age group in the nation,” said OCSC Sporting Director, Peter Nugent. “He is a player that we have tracked for a long time and believe he is the perfect fit for our pathway. With the right guidance, he has all the potential to play at a very high level.”

At the Barca Residency Academy, Jamison scored five goals in his first eight starts for the U-17 squad and was quickly called up to the U-19s. There, he helped the team win the MLS Next Southwest Division in 2022 and scored seven goals in 13 games, including the equalizer against FC Dallas in the MLS Next Cup Playoffs.

Jamison has earned recognition for his play, including being named to the inaugural MLS Next All-Star Game in Minnesota this year. Among the 45 players named to the game, he was one of only five non-MLS academy players selected and started the match for the West squad.

"We are extremely excited to see Bryce sign his first professional contract with Orange County SC,” Barcelona Residency Academy Director Ged Quinn said. “Bryce is an exceptional talent with a ton of potential and we are sure that he will thrive in the environment at OCSC. This will be just the beginning of an exciting professional career for Bryce and we look forward to monitoring his future success within the game. He will always have the full support from everyone here at Barça Residency Academy and he fully deserves this opportunity to go and prove himself in the USL. We could not be prouder of him!”

Following his performances at the club level, Jamison earned a call-up from United States U-17 Men’s Youth National Team head coach Gonzalo Segares for the training camp taking place at the Elite Athlete Training Center in nearby Chula Vista, CA.

Jamison will be available for selection ahead of this Saturday’s match on the road against the Pittsburgh Riverhounds SC.