TAMPA, Fla. – The USL Championship announced the Team of thr Week for Week 28 of the 2022 regular season on Tuesday, with Birmingham Legion FC midfielder Enzo Martinez voted the Championship Player of the Week presented by Konami eFootball for the second time this season.

Martinez and Legion FC trailed Pittsburgh Riverhounds SC 1-0 at home at halftime of last Wednesday’s match. The match was a pivotal one in the equation for seeding in the Eastern Conference. With a loss, Birmingham would have fallen four points behind Pittsburgh into 5th place in the East. The difference between finishing fourth and fifth in the table is the difference between hosting a quarterfinal match and playing it on the road, so the stakes were high.

Martinez took control of the match and carried his team to victory as Legion FC ended the night in fourth place, two points ahead of Pittsburgh. First, he took advantage of a failed clearance attempt and popped a loose ball up to himself in the box before firing past Hounds goalkeeper Jahmali White from a sharp angle to tie the match in the 50th minute. In the 66th minute, Martinez raced past the Pittsburgh defense to receive a through ball and cut it back through traffic for Sadik Balarabe to finish for a 2-1 Birmingham lead. 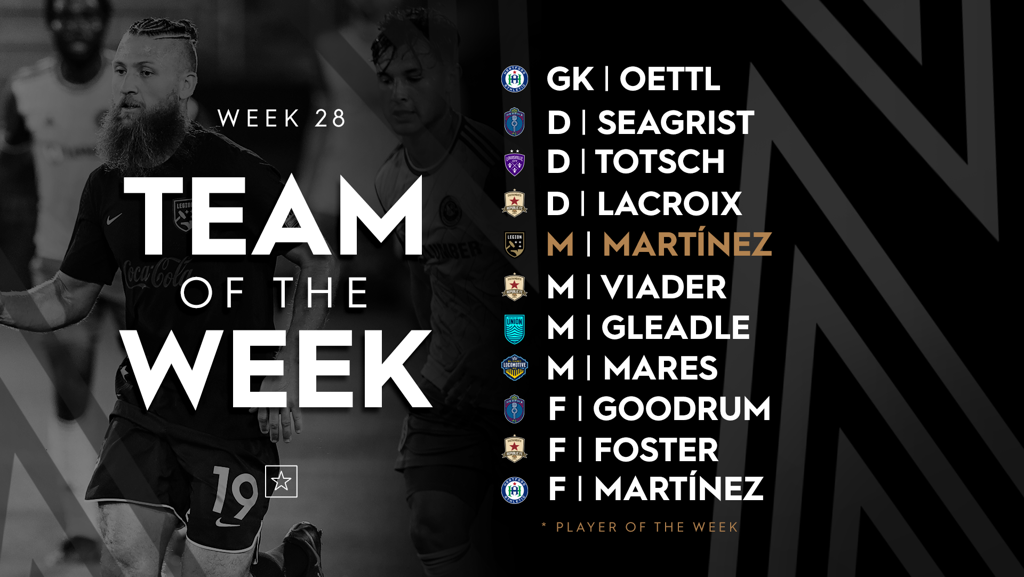 GK – Yannik Oettl, Hartford Athletic FC: Oettl posted a five-shutout in his team’s 3-0 victory over Las Vegas Lights FC, including on a shot from point-blank range in the second half that would have halved Las Vegas’ deficit.

D – Patrick Seagrist, Memphis 901 FC: Seagrist had a strong all-around game in Memphis’ 5-0 win over the Charleston Battery, helping to keep a clean sheet and tallying one assist off two chances created at the offensive end.

D – Duke Lacroix, Sacramento Republic FC: Lacroix completed 84 passes at 98 percent accuracy, while contributing to a clean sheet in a 4-0 win over Orange County SC. He also added three tackles and an interception.

M – Enzo Martinez, Birmingham Legion FC: Martinez scored and assisted as his team overturned a halftime deficit against a close rival in the standings.

M – Damia Viader, Sacramento Republic FC: Viader recorded a goal and an assist in a lopsided win over Orange County, while completing 87 percent of his passes and creating a pair of chances.

M – Sam Gleadle, Monterey Bay FC: Gleadle racked up a goal and a pair of assists as Monterey Bay F.C. cruised to a 5-0 win over the Indy Eleven.

M – Dylan Mares, El Paso Locomotive FC: Mares scored a goal and recorded four tackles, two clearances and an interception, all while completing 87 percent of his passes in a 3-2 road win over Los Angeles Galaxy II.

F – Phillip Goodrum, Memphis 901 FC: Goodrum scored twice in the opening 12 minutes of the match and later added an assist in a comprehensive victory over Charleston.