Veteran earns August’s award after leading club to four wins out of five, including major rivalry victory in Memphis 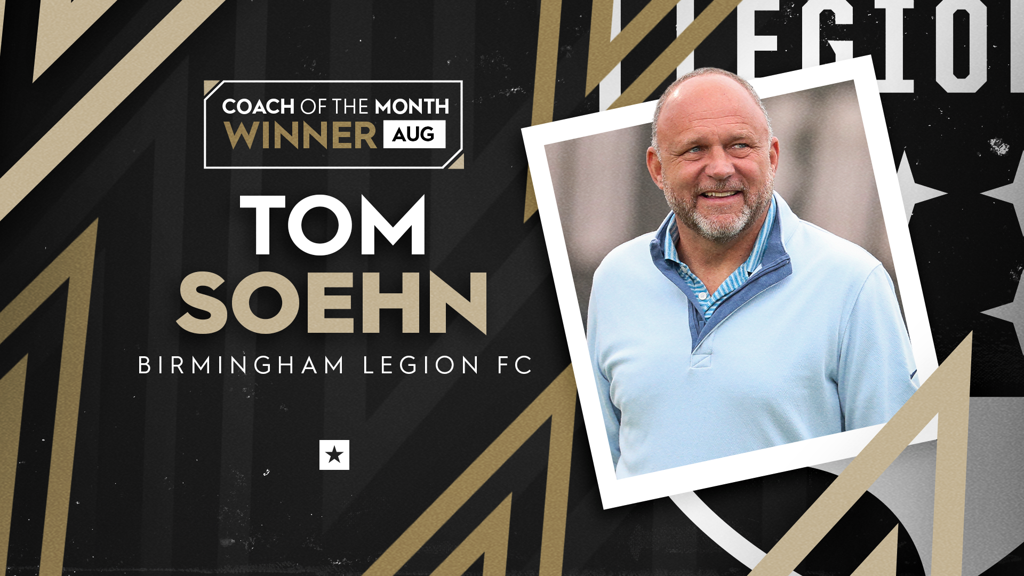 They’re the games that as a club mean that little bit more – the rivalry contests that build history and bragging rights between two fanbases and cities.

So, when Birmingham Legion FC claimed a season sweep of the Southern Harm derby against Memphis 901 FC on August 20 with a 4-2 victory at AutoZone Park – where a season ago the side had suffered a dramatic and devastating defeat – you’d better believe it was one of the big wins this season for the club from the Magic City.

“Those rivalry matches are always crucial,” said Legion FC Head Coach Tom Soehn. “I don’t put too much weight on last year and try to look at each year differently. Anytime we go up against Memphis, and you know, to their credit, they’re a good team, so being able to beat them in their building, for a rivalry match, is always special.”

The win provided a topper to what was a strong month for Legion FC overall, which on Wednesday saw Soehn voted as the USL Championship’s Coach of the Month for August. Leading his side to four wins in five games, as well as a league-best 15 goals on an Expected Goals mark of 13.94xG, the veteran Head Coach has already guided the side to a fourth consecutive postseason berth.

On Wednesday night, the side is set to face one of its most important games of the remainder of the regular season as it plays host to Pittsburgh Riverhounds SC. The Hounds arrive at Protective Stadium in fourth place, one point ahead of Legion FC, as they duel for a home playoff game in the Eastern Conference Quarterfinals next month.

It’s a game Soehn is looking forward to as his side aims to turn around a 1-0 victory for the Hounds in their first meeting this season. Having claimed a notable road victory against Sacramento Republic FC – Legion FC remains the lone visitor to win at Heart Health Park in all competitions this season – as well as San Diego Loyal SC, New Mexico United and a sweep of rival Memphis, Soehn expects his side will be ready to step up to the challenge.

“This year when we’ve played the big games, I feel like we’ve gotten up for it,” said Soehn. “When there hasn’t been much on the line, I feel like we haven’t always performed up to the ability that we can. So, I expect us to make sure to show up and know what the game is about, because for seeding we need to beat them because they beat us at their place – those are the consequences of it. Every big game at this time of year you want to make sure your guys are pushing in the right direction and bringing that playoff mentality.”

Having reached the postseason every season of its history, Soehn is looking for playoff success this year after last year advancing to the Eastern Conference Semifinals. With the building blocks the club has put in place both with experienced veterans and younger professional arrivals – including teenagers Matt Corcoran and Mataeo Bunbury – he’s also pleased with the platform Legion FC has built to continue long-term success for the club.

“The support from ownership, and with my relationship with [Legion FC President] Jay [Heaps], from working with him, we’ve been able to put together really competitive groups and really build a core, which we’ve talked about from year one,” said Soehn. “This year we’ve moved to a bigger stadium, and that’s the start of the next stage of moving up to be one of the bigger clubs, infrastructure wise. But overall, coming here four years ago to where we are today, I’m pleased with the progress.”

Soehn earned 41 percent of the ballot to claim the award. Miami FC Head Coach Anthony Pulis finished second with 26 percent as his side won four out of five contests and recorded shutouts in all four victories, allowing only two goals to record a +7-goal differential for the month.