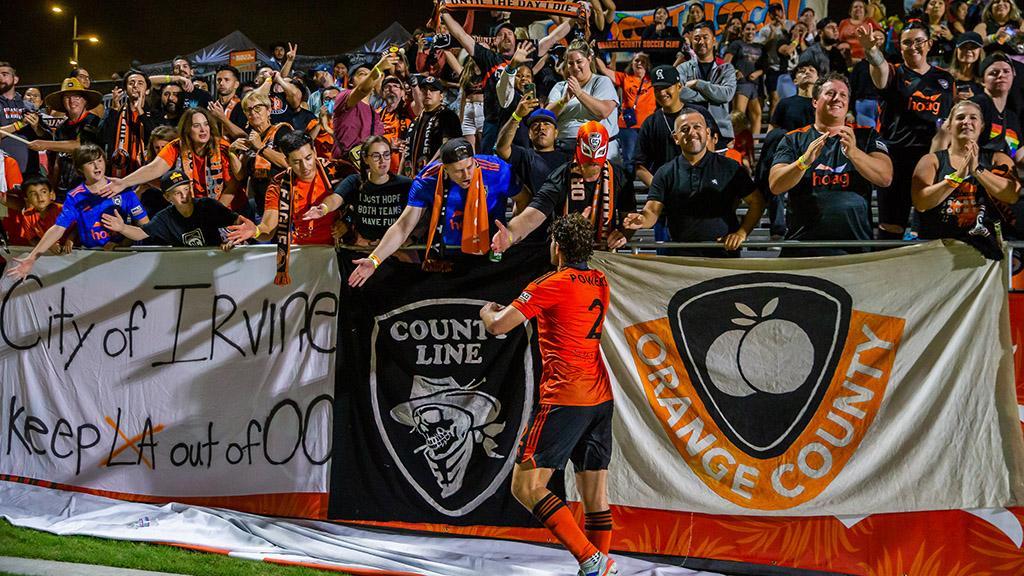 It wasn’t that any member of Orange County SC’s squad needed reminding of what its contest against 405 Derby opponent the LA Galaxy II represented, but it certainly drove home the meaning of the final league meeting between the clubs before an Orange County SC-record sellout of 5,500 at the venue the defending USL Championship title holders have called home since it opened in 2017.

The team responded in kind.

Behind the 20th goal of the season by current USL Championship Golden Boot leader Milan Iloski and a shutout from Patrick Rakovsky, one of last year’s heroes on the run to the club’s first league title, Orange County took a 1-0 victory that completed a season sweep of Los Dos.

It was a second-half display that completed the turnaround of a series that in its early years was dominated by LA, only for Orange County to prove more than a match on and off the field in recent years under the ownership of James Keston and sporting direction of President of Soccer Operations & General Manager Oliver Wyss. OCSC claimed the last three meetings between the teams, with Iloski’s fine finish off the rebound of Sean Okoli’s initial shot equaling the club’s single season goalscoring record of 20, previously achieved by former standout Thomas Enevoldsen in 2018.

“We knew after the first half we needed to take the shackles off a little bit and that was what they were told in the locker room,” said Chaplow. “Obviously in the second half I thought we were outstanding. Pat [Rakovsky] made some big saves which you always need, but to a man I’m delighted with the response and the way they went about the second half to get the victory.”

For the hosts, the win represented more than just a late-season victory in what’s been down year on the field overall. While the club can count successes such as the transfer of United States youth international Kobi Henry to Ligue 1 club Stade de Reims for a USL record fee in the summer, the playoffs and a chance to defend its title look out of reach.

Then there’s the question of whether OCSC’s time at Championship Soccer Stadium is coming to an end, with the LA Galaxy having proposed to Irvine City Council that the Galaxy II move into the facility next season as it moves from the second-tier USL Championship to third-tier MLS NEXT Pro. Fan response – as evidenced on Saturday – opposes the move, and with further discussion set for Tuesday night’s City Council meeting, the club is encouraging its fans to remain vocal in their support for Irvine to remain Orange County SC’s home.

“All of us at Orange County SC hope to be able to leave that Council meeting with the certainty we need to plan for the season ahead and look forward to hearing the roar of victory from our fans echo around the Council Chamber on Tuesday night,” the club said in a statement last Friday.

After one of the more memorable nights in the club’s history, a roar of victory echoed around Championship Soccer Stadium on Saturday. On Tuesday Orange County SC and its fans aim to earn what would be the biggest victory of the year.