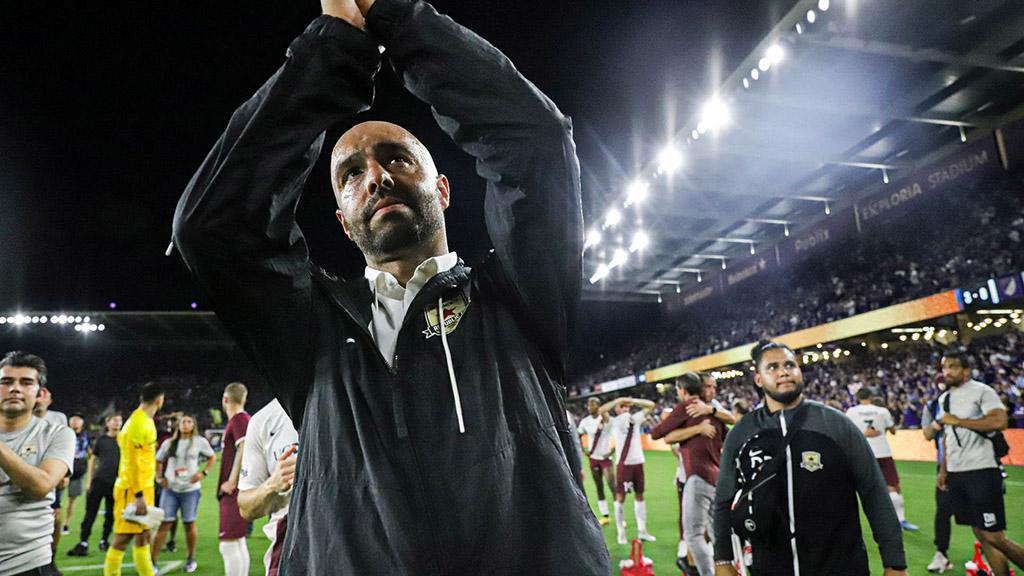 ORLANDO, Fla. – After the finality of it all began to dissipate, Sacramento Republic FC’s players and staff collectively applauded the travelling fans in the upper reaches of Exploria Stadium, who responded in kind at the end of a dream that ended 15 minutes too soon.

The players and coaching staff then went to collect their finalist medals, where they were greeted by handshakes and commiserations from the dignitaries on hand led by USSF President Cindy Parlow Cone.

And then, in an uncommon turn, they returned to the catwalk placed on the field leading to the stage and surrounded it on either side, offering a guard of honor to the Orlando City SC players and staff that had just defeated them to claim the 2022 Lamar Hunt U.S. Open Cup.

If there was a gesture that summed up Republic FC’s historic run, and what the club is made of and stands for, its last act before departing the stage was the perfect illustration.

Glory in victory, honor in defeat.

For more than an hour, Sacramento more than held its own against its Major League Soccer opponent. The Lions held more possession, and created shots, but none which threatened Republic FC goalkeeper Danny Vitiello. The home supporters among a club record of 25,527 appeared to be getting restless.

It was, in fact, Republic FC that produced the first shot on target of the game. With 16 minutes to go, Douglas Martinez Jr.’s header off an angled cross from Rodrigo Lopez was claimed by Orlando goalkeeper Pedro Gallese.

It only took a minute, however, for everything to come undone. A misjudgment by Republic FC defender Dan Casey led to a turnover in the defensive end, and within seconds the ball was on the left foot of Uruguayan international Facundo Torres. His strike from the top of the penalty area was perfectly placed, as was his penalty kick five minutes later that sealed the first trophy for the Lions since they claimed the 2013 USL Championship Final, a victory that arrived nine years prior to the day of Wednesday night’s triumph.

“When you make mistakes like that, they punish you," Briggs said. "That's the level they play at. You make mistakes at this level, and you get punished. And that’s what happened tonight.”

As difficult as the ending proved, Sacramento’s run brought pride and a sense of rejuvenation to both the club and the tournament. From the large – and loud – contingent of travelling support that made its presence felt throughout the night at Exploria Stadium to the thousands that attended the club’s watch party back on the west coast, Republic FC not only burnished its reputation with its longtime fans but made new ones both locally and nationally.

“At the end of the day we have to be proud of ourselves, you know?” said Lopez, whose four goals tied him for the tournament lead. “We made history. We did things that no-one thought we could do. Put ourselves in a situation to play a final. That's something that everyone should hold on to.”

There is more to come for Republic FC, both this season and in the years to come. The club’s attention will immediately turn to securing a place in the USL Championship Playoffs, where it currently sits fourth in the Western Conference, and pursuing a second USL Championship title in its history.

Then there’s the promise of a new downtown stadium, an Academy program that continues to turn out talented professional prospects and youth internationals, and an ever-growing support base in its city.

“The guys gave a fantastic representation of themselves individually and as a group collectively,” said Briggs. “[They] gave a great representation of the USL Championship. They should be proud of the performance they put out there and hopefully it highlights there are good players in the second division. There are good players that have the potential to move on and play on a stage like they played on tonight, if you take the time to look.”