TAMPA, Fla. – The USL Championship announced the Team of the Week for Week 26 of the 2022 regular season on Tuesday, with Indy Eleven forward Stefano Pinho voted the Championship Player of the Week presented by Konami eFootball after recording both goals in his side’s 2-1 victory against Louisville City FC last Wednesday night, earning the Boys in Blue the LIPAFC series for the season.

The Brazilian veteran currently leads Indy with nine goals this season, providing one of the bright spots for the campaign at the club. After Indy fell behind to Eastern Conference leader LouCity at Michael A. Carroll Stadium, Pinho led the rally with an equalizer in the 28th minute as he stole in to clip a finish past Louisville goalkeeper Kyle Morton and head home from close range before a covering defender could clear. Pinho then converted from the penalty spot with 12 minutes remaining, shooting low to the left corner to earn Indy all three points.

Pinho earned 41 percent of the ballot to claim the award. Monterey Bay F.C. midfielder Sam Gleadle finished second on 29 percent after scoring a pair of goals in his side’s 3-1 victory against San Diego Loyal SC on Saturday night at Cardinale Stadium, a result that kept MBFC’s playoff chances alive in its inaugural season. 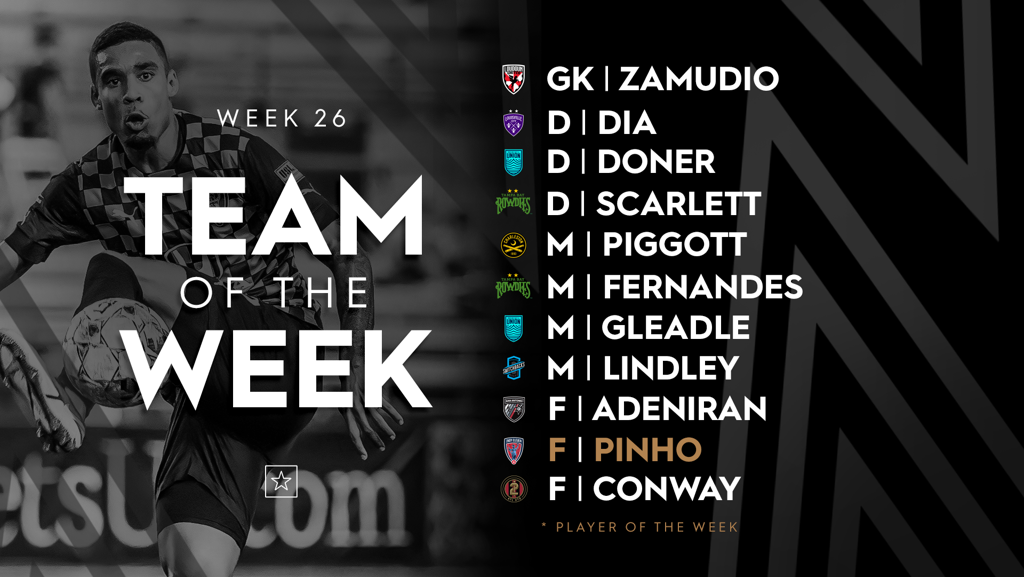 GK – Luis Zamudio, Loudoun United FC: Zamudio recorded a nine-save shutout in Loudoun’s 1-0 victory on the road against Memphis 901 FC last Wednesday night, the most saves in a shutout so far this Championship season.

D – Amadou Dia, Louisville City FC: The full back recorded a pair of assists across two outings against Indy Eleven and Sacramento Republic FC and had a big week overall, winning 12 of 14 duels, 3 of 4 tackles and completing 68 of 85 passes as LouCity clinched a playoff berth on Saturday night.

M – Romario Piggott, Charleston Battery: The Panamanian had a goal and assist in the Battery’s 3-0 victory against the New York Red Bulls II on Saturday night and notched four chances created while winning 4 of 5 duels and 2 of 2 tackles defensively.

M – Leo Fernandes, Tampa Bay Rowdies: Fernandes had a pair of goals and one assist to lead the Rowdies to a 6-1 victory against Las Vegas Lights FC on Saturday night while also completing 52 of 60 passes and recording five chances created for the hosts at Al Lang Stadium.

F – Stefano Pinho, Indy Eleven: The Brazilian forward scored both goals as Indy took a 2-1 victory against Louisville City FC in the LIPAFC on Wednesday night, recording five shots overall while hitting the woodwork once and winning 5 of 10 aerial duels.

F – Jackson Conway, Atlanta United 2: Conway scored both goals as Atlanta took a 2-1 victory against FC Tulsa while ending the night with six shots overall and winning 4 of 5 duels as he moved to a single-season club record with 10 goals overall on the campaign.