TAMPA, Fla. – The USL Championship announced the Team of the Week for Week 25 of the 2022 regular season on Tuesday, with Oakland Roots SC goalkeeper Paul Blanchette voted the Championship Player of the Week presented by Konami eFootball after posting 13 saves across two contests during the week, including an outstanding nine-save outing in Roots SC’s midweek victory against San Diego Loyal SC.

The northern California native played a key role in Oakland earning a place in the USL Championship Playoffs a season ago and has been impressive in 11 appearances during a campaign that has seen him sidelined at times due to injury, averaging almost four saves per game. The 28-year-old was at his best in Roots SC’s 3-1 victory against SD Loyal last Wednesday night at Torero Stadium with his nine saves including some highlight-reel stops in a key victory for the visitors. Blanchette added another four saves in Oakland’s 1-0 loss to Sacramento Republic FC on Saturday night, helping keep the visitors in the game against the 2022 Lamar Hunt U.S. Open Cup Finalist at Heart Health Park, and over the week he posted a -2.93 goals-minus-expected goals mark. 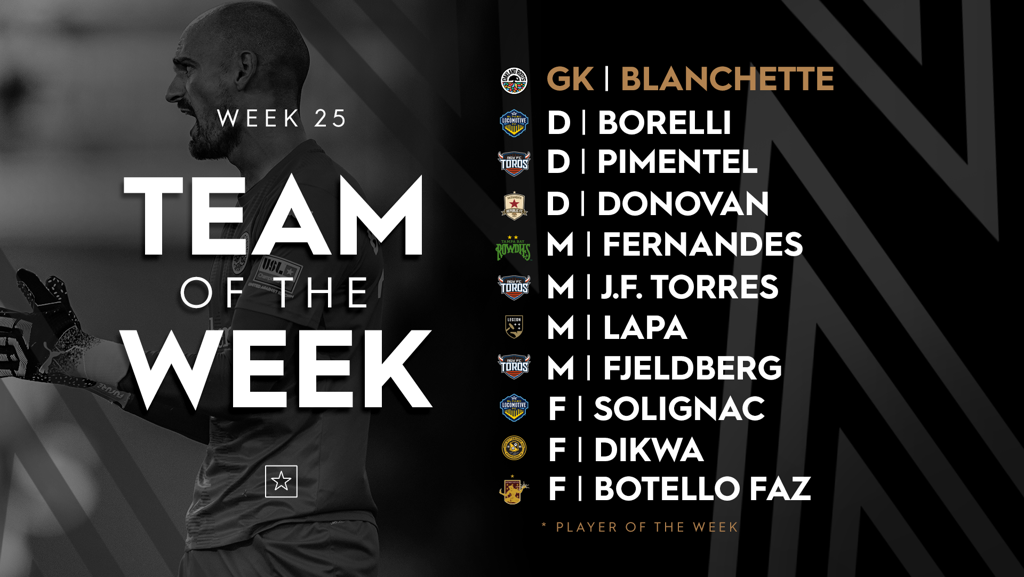 GK – Paul Blanchette, Oakland Roots SC: Blanchette recorded 13 saves across a pair of contests, including a nine-save outing in Roots SC’s 3-1 victory against San Diego Loyal SC on Wednesday night, to register a -2.93 goals-minus-expected goals mark for the week.

D – Eder Borelli, El Paso Locomotive FC: The Mexican full back notched a pair of assists and had five chances created overall in Locomotive FC’s 3-1 victory against Phoenix Rising FC and won 4 of 4 duels and made a pair of clearances defensively.

D – Erik Pimentel, Rio Grande Valley FC: The center back tallied a fine headed goal in the Toros’ 5-0 victory against Las Vegas Lights FC and completed 69 of 70 passes – completing 6 of 6 long passes – while winning 4 of 7 duels and making five recoveries.

D – Conor Donovan, Sacramento Republic FC: Donovan scored the only goal as Sacramento earned a 1-0 victory against Oakland Roots SC on Saturday for its first league win against its NorCal rival while winning 3 of 3 duels and making four interceptions defensively.

M – Leo Fernandes, Tampa Bay Rowdies: Fernandes recorded a goal and assist in the Rowdies’ 3-1 victory against Orange County SC on Saturday night and notched seven chances created while winning 12 of 17 duels, 5 of 6 aerial duels, and completing 5 of 6 dribbles.

M – Bruno Lapa, Birmingham Legion FC: The Brazilian notched a pair of assists and had three shots and eight chances created to serve as the catalyst for Legion FC’s 3-1 victory against the New York Red Bulls II on Sunday evening, winning 3 of 5 duels and completing 44 of 56 passes overall.

F – Albert Dikwa, Pittsburgh Riverhounds SC: The Cameroonian scored both goals to lead the Hounds to a 2-1 victory on the road against Atlanta United 2 and had three shots overall while completing 22 of 25 passes and winning 2 of 3 aerial duels in a strong all-around performance.

F – Pato Botello Faz, Detroit City FC: The Mexican striker scored twice on four shots as Le Rouge earned a 3-0 victory on the road against the Charleston Battery and completed 16 of 21 passes as DCFC continued its drive toward a postseason berth.