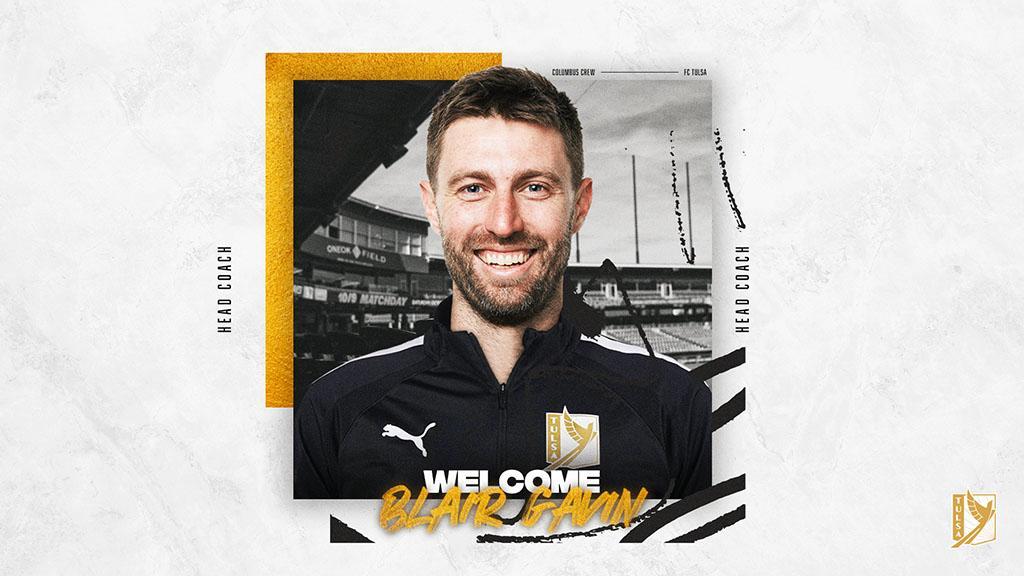 FC Tulsa has appointed Blair Gavin as its new Head Coach, with the current Columbus Crew assistant set to assume his new role this offseason.

TULSA, Okla. – FC Tulsa announced on Monday the club had appointed Blair Gavin as its new Head Coach, with the current Columbus Crew and former Phoenix Rising FC assistant coach Blair Gavin set to take the reins following the conclusion of the 2022 campaign.

“I am very honored and humbled to be able to represent FC Tulsa,” said Gavin. “This is an opportunity that doesn't come often, and I am so thankful for the FC Tulsa leadership to entrust me with this project. My goal is to add a positive impact in the community by establishing a team who represents the badge with relentless passion. For Tulsa.”

Gavin joins FC Tulsa from the Crew, where he currently operates as an assistant coach for the Major League Soccer club. Gavin was initially hired as Columbus’ First Team Video Coach Analyst in December of 2021 before being promoted to an assistant position after his first season in Columbus. Before his time with the Crew, Gavin was an assistant coach with the USL Championship’s Phoenix Rising FC from 2018-2020, playing a crucial tactical role for what became one of the best squads in the history of the Championship.

Phoenix went 54-16-14 while Gavin was part of the club’s staff, reaching the USL Championship Playoffs in each of the three seasons. Rising FC reached the USL Championship Final in both 2018 and 2020 while appearing in the Conference Semifinals in 2019, the same season in which Phoenix set an American soccer record with 20 consecutive victories.

The list of players whom Gavin has coached is extensive, spanning from MLS superstars Gyasi Zardes and Lucas Zelarayán in Columbus to Chelsea F.C. legend Didier Drogba and Solomon Asanté with Rising FC.

“I would like to personally thank Blair for all the work he put into our club over the past two seasons and want to congratulate him for this opportunity. I am confident he will make an excellent head coach in his new role,” said Columbus Crew Head Coach Caleb Porter. “Through the end of this year, Blair will continue to be a valuable member of our staff and integral to our video analysis, training and match preparation. I have known Blair for a long time, and it’s been rewarding watching him grow from an MLS player to coach, so naturally I am excited for what’s ahead in this next step of his career. I also look forward to his continued contributions as we close out the regular season and push for our postseason goals.”

As a player, Gavin was drafted 10th overall in the 2010 MLS SuperDraft out of the University of Akron by Chivas USA. The former First Team All-Mid-American Conference midfielder would make appearances for Chivas USA, the New England Revolution, and the Seattle Sounders over his MLS career. Gavin then joined the Atlanta Silverbacks in the NASL followed by a three-year USL Championship stint split between Portland Timbers 2 and Phoenix Rising FC.

“I want to thank the candidates from around the world who expressed interest in this position and our club," said FC Tulsa president Sam Doerr. "Ultimately, Blair checked all the boxes we were looking for and we are thrilled to welcome him to Tulsa. From the outset, we wanted an individual who had intimate knowledge of the USL, and having played and coached in the USL Championship along with MLS, Blair checked those boxes. In addition, we were looking for someone who could relate with both our veterans and younger players, and we think we’ve found that with Blair. Our supporters will enjoy the entertaining, attack-minded style of soccer that Blair and his staff will implement.”

Gavin’s Tulsa tenure will begin after FC Tulsa’s current campaign comes to an end. Donovan Ricketts will remain the organization’s interim head coach through the remainder of 2022.