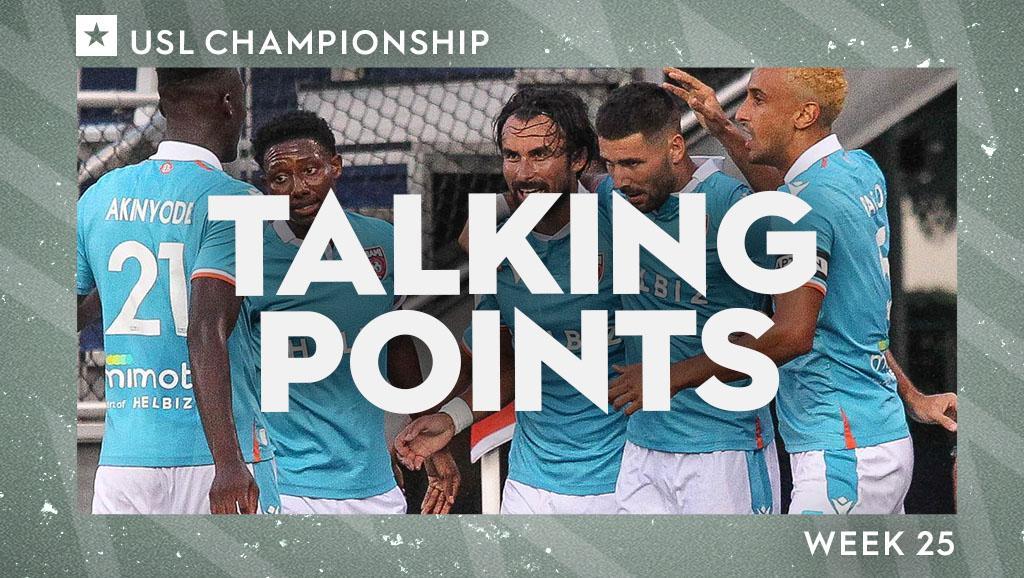 Miami FC's victory against Eastern Conference leader Louisville City FC not only pushed the South Florida side closer to a playoff position, but also showed the sort of threat it could be in the postseason. | Photo courtesy Orovio Photography / Miami FC

The first ticket to the 2022 USL Championship Playoffs has been booked, although maybe not in the manner San Antonio FC would have liked, and the playoff race in the Western Conference took another collection of twists after an intriguing Saturday night of results.

Here are 10 things we took away from the action, starting with the two biggest results of the weekend.

Overall, Miami FC’s best work this season has come on the road. Its eight victories away from home are tied for the most in the Eastern Conference and are the biggest reason the side is on its way to a second consecutive postseason berth. In Saturday night’s 1-0 victory at home to Louisville City FC, though, Miami showed the sort of character defensively that allowed Kyle Murphy’s fourth-minute finish to stand up in a statement against the Eastern Conference leader.

“I’m really proud of the players, I thought it was a mammoth effort defensively,” said Miami Head Coach Anthony Pulis. “I thought we showed a lot of resilience, a lot of commitment to working as a group to defend the goal. The goal was fantastic, for us to get that early in the game, and then when you come up against a quality team like that, they’re going to have a lot of possession, that we were going to be under a lot of pressure, and we knew that we would have to stand up to that.”

Miami has now won three in a row and posted three consecutive shutouts. As importantly, they’re at their best when scoring first, posting a 10-2-2 record when notching the opening goal. With a defense that’s showing the cohesiveness its currently possesses, and the road prowess it’s shown, this side could be dangerous come playoff time.

Riding the wave for a 10-game undefeated streak going into the weekend – including nine victories – Louisville City FC’s momentum was halted for a night by Miami’s resolve. For a team that has typically found its form late in the season, building into a potential postseason run, defeat might not be the worst thing with nine games to go in the regular season, especially with a quick turnaround to games against rival Indy Eleven on Wednesday night and then U.S. Open Cup Finalist Sacramento Republic FC on Saturday up next.

“It was a wakeup call for us,” said LouCity defender Amadou Dia. “We still haven’t done anything. Ten games or not, all that matters at the end is we win that championship. We’ve got to keep pushing.”

LouCity will almost certainly be fine. The side has lost consecutive games only once this season, and most importantly its loss didn’t see it lose the inside track to the best record in the regular season by the end of the night.

There was maybe a little bit of déjà vu for Indy Eleven on Saturday night, but in a good way this time. After seeing its winless streak reach 12 games in Week 24 as FC Tulsa goalkeeper Austin Wormell produced a seven-save shutout to send the visitors to defeat at ONEOK Field, this time it was Indy Eleven goalkeeper Tim Trilk’s turn to put in a game-winning performance.

Trilk’s six-save display saw Indy at least equal Miami FC for the result of the weekend with a 1-0 victory against Western Conference leader San Antonio FC as recent arrival Robbie Dambrot scored his first goal for the Boys in Blue. After a challenging season, the win provided a glimmer of sunshine before a crowd of more than 10,000 fans at Michael A. Carroll Stadium.

San Antonio FC could have regained control over the road to the best record in the league against Indy after Louisville City FC’s loss, but it wasn’t its usual self in the final third with its best chances failing to find the target as Indy put up a solid defensive display. The side’s six shots on target were just above its season average, but there just wasn’t quite enough quality to find a breakthrough as Head Coach Alen Marcina acknowledged after the game.

“We created some very good opportunities, we know we have to be better,” said Marcina. “We put one of those away, it’s a different game. We clearly outshot the opponent, they had one half chance, a slight deflection, goal. But, again, that’s less about what they did. Our pressing actions were fantastic, guys were committed to being aggressive in our pressing actions, fantastic. We won the ball in good spots, they basically gave us the ball, again due to our pressing. [We] created high-quality opportunities that we have to be better at executing – that final action.”

Birmingham Legion FC’s performance on Sunday evening showed the two possible versions of the team. In the first half, the attacking threat was there, but so was a lack of focus that allowed the New York Red Bulls II to find chances on the counterattack and even take the lead from the penalty spot. Then in the second half, Legion FC showed what it can be capable of at its peak, pulling away for a 3-1 win that could have ended up being by a wider margin.

“We were so concerned with calls and everything else outside the game, and it's just a distraction,” said Legion FC Head Coach Tom Soehn. “I think once we started focusing on the game, obviously their desire to slow the tempo down was there, so we wanted to keep the tempo high, and I think as we did that, the second half things started falling our way. But in the first half, we started getting frustrated because we missed chances, and then taking risks with our shape. We were getting countered.”

If the latter, focused version of Soehn’s squad shows up down the stretch and into the playoffs, watch out. There’s a lot to like there, especially in the attacking third of the field when Bruno Lapa is on song.

There had to be something cathartic for Rio Grande Valley FC about the way Saturday night played out. Just over a month after being blanked by Las Vegas Lights FC despite holding a 27-3 advantage in shots on their home turf at H-E-B Park, almost everything the Toros touched turned into a goal in the return fixture at Cashman Field, giving the visitors a 5-0 victory that was one goal away from matching the biggest victory in club history.

It helped, certainly, that Las Vegas was reduced to 10 players after only 14 minutes after Alex Lara’s red card, but the quality RGVFC delivered could easily have earned a comprehensive victory regardless. Former United States international Jose Francisco Torres delivered a pair of assists, including a sublime chip that Christian Pinzon volleyed home to open the scoring, and Jonas Fjeldberg’s pair of goals were equally good.

It's the sort of attacking display the Toros have been threatening to deliver against someone for a few games. Since the start of July, they’d scored only five times on a 9.25 Expected Goals mark. Saturday made up that margin, and then some. Going into another six-pointer against Phoenix Rising FC on Wednesday they now have some positive momentum to build on.

It didn’t result in the majority of possession over the 90 minutes – on the road against another possession-heavy side like El Paso Locomotive FC, that would have been an accomplishment – but you could see the ideas that new Phoenix Rising FC Head Coach Juan Guerra was aiming to implement as the two-time Western Conference title winner looks to make a late run into the playoff field.

What was missing, Ryan Flood’s excellent second-half strike aside, was the finishing touches that could have earned the visitors a result at Southwest University Park. Add in moments that El Paso capitalized on – see the turnover that led to Luis Solignac’s opening goal for Locomotive FC – and Rising FC’s playoff chances took another hit with a 3-1 defeat. That only raises the stakes for a crucial week for the side as it hosts Rio Grande Valley FC and visits Colorado Springs Switchbacks FC, with the eight-point gap it must make up with nine games to go a serious concern.

El Paso Locomotive FC, meanwhile, showed how good it can be when things are clicking. As in its recent four-goal second half against Colorado Springs Switchbacks FC earlier in the month, El Paso’s finishing with two goals from Luis Solignac and another by Dylan Mares – his fourth in the past three games – delivered a much-needed victory to Locomotive FC’s playoff hopes.

“They have been magnificent,” said Locomotive FC Head Coach John Hutchinson of his players after the game. “We had a really good week at training. A lot of competition at training for these positions, and they deserved it. They have stayed tough for a long time.”

The big question for Locomotive FC now is can it find another upward streak of form like the one that dug it out of a dismal start to the season. With only seven games left to play, El Paso’s playoff fate is still out of its hands as it faces another crucial game next Friday night on the road at rival New Mexico United.

If you look at the Individual Saves list in on the stats page, you need to scroll a little bit to find the name of CJ Cochran of the Tampa Bay Rowdies. With 39 stops in 22 appearances – an average of 1.78 per game – the veteran shot-stopper hasn’t been among the busiest in the league compared to some of his contemporaries.

That’s in part a fact of playing behind what has been one of the best-organized teams in the Championship under Head Coach Neill Collins, with the Rowdies having faced the second-fewest shots on target (72) and sitting with the second-lowest Expected Goals against mark (21.95xGA) in the league this season. What the Rowdies need from Cochran is the big save when its needed, and that’s exactly what he delivered on Saturday night with a three-save performance that allowed the 10-player Rowdies to hold on for a 3-1 victory against Orange County SC that allowed the two-time defending Eastern Conference title holder to close the gap to Louisville City FC at the top of the standings.

As great as some of the early meetings between Sacramento Republic FC and Oakland Roots SC have been – see their 3-3 draws in 2021 and earlier this season – it’s still taken a while for Republic FC to put together a signature performance against their regional rival. It accomplished just that on Saturday night, taking a 1-0 result that could have ended by a wider margin if not for the hosts hitting the woodwork three times at Heart Health Park, but nonetheless earning their first win in the series.

“It wasn't on my mind,” said Briggs of defeating Oakland for the first time. “But it's been mentioned to me, it's been said to me. It's something that obviously we wanted to win. You don't want to have that record against the local rival, so obviously to beat a local rival and put that one straight and put it behind us means a little bit more.”

As Republic FC gets ready for the biggest week in its history – starting with next Saturday’s visit to Louisville City FC before the 2022 Lamar Hunt U.S. Open Cup on September 7 at Major League Soccer’s Orlando City SC – the performance was exactly the type which the side needed. Solid defensively, creative in the attacking third, and closed out confidently.