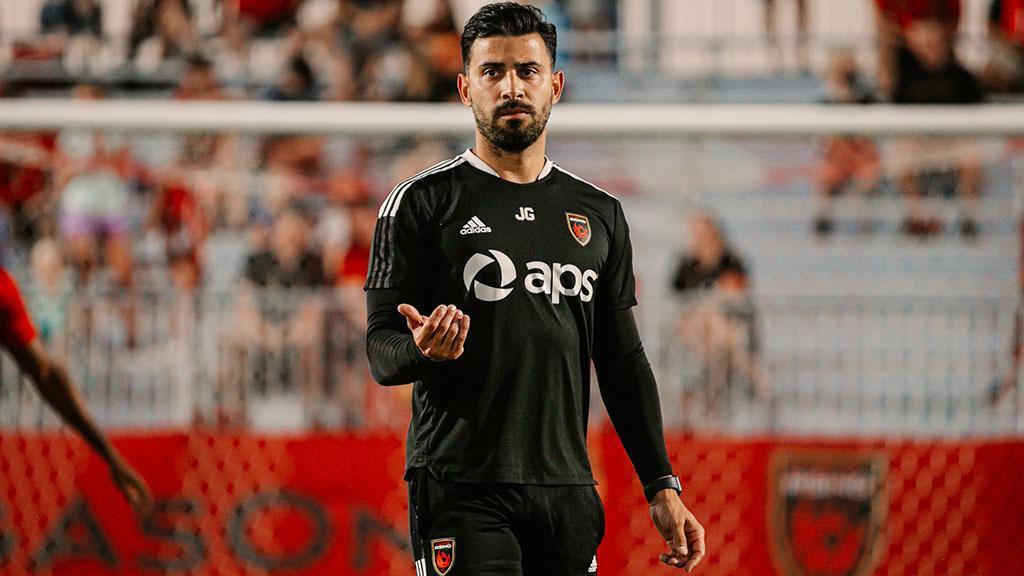 Newly appointed Phoenix Rising FC Head Coach Juan Guerra is looking for a philosophical shift as he tries to lead the club back above the playoff line with 10 games to go in the regular season. | Photo courtesy Ashley Orellana / Phoenix Rising FC

When Phoenix Rising FC takes the field for the first time under new Head Coach Juan Guerra on Saturday night, you could expect to see a contrast in set-up and playing style than you might have been used to.

As Guerra was officially introduced to local media on Tuesday after the completion of an agreement between Rising FC and fellow USL Championship club Oakland Roots SC – where Guerra had taken the head coaching reins prior to this season after serving as an assistant coach at Rising FC under former Head Coach Rick Schantz last year – he detailed the plan and playing style he hopes will lift Phoenix back into the playoff positions after a below-par season so far for the two-time Western Conference title winner.

The contrast in playing approach between Phoenix and Roots SC has been notable this season. Under Guerra, Oakland ranked fourth in the Championship in average possession at 54.2 percent per game, attempted the third-most passes in the league at 11,757 and had a passing accuracy rate of 79.6 percent.

By contrast, Rising FC ranked 25th out of the Championship’s 27 teams with a possession mark of 45.7 percent, the second-fewest passes attempted at 8,672 and a passing accuracy rate overall of 76.6 percent. While Phoenix has attempted more shots this season than any other team – a hallmark of the side during Schantz’s tenure – the club’s overall quality of opportunities and conversion rate struggled. Phoenix’s mark of 33.91 Expected Goals ranked below Oakland’s (35.46), while Roots SC had a higher shooting accuracy rate and shot conversion rate as it aimed to balance tempo and game control.

For a team with players like well-regarded midfielders Aodhan Quinn, Luis Seijas and Kevon Lambert, winger Santi Moar and a contingent of forwards that was recently bolstered by the arrival of JJ Williams, the aim of patience and higher-leverage scoring situations is one that certainly feels possible given the talent Guerra has on hand.

What that means for the first lineup Rising FC will see on the field on Saturday – and the tactical structure Guerra looks to implement – is going to be a key storyline not only this weekend but for the remainder of the season.

“You know the quality that is in that locker room,” said Guerra. “So, now I have a lot of pieces to play different formations and we can adapt depending on the rival that we have. That’s great for us, as managers. And that’s also what we’ll see on the day to day. At the end of the day, it’s not so much about what I want to do. It’s also a lot about who is in the locker room and who are the pieces that at a given moment can give me their best.”

Facing a five-point gap to El Paso in seventh place in the Western Conference going into this weekend’s games, there would certainly be no better time for Rising FC to find a victory. There are other big games to come as well, including a visit from Oakland to Wild Horse Pass on September 10 that figures to be another key game in the postseason race, and a must-see for neutral fans as well as those of both clubs.

For Guerra, finding the right pieces and right mentality is the focus in his first week back in Phoenix as he looks to find an avenue forward to the success Rising FC and its supporters have come to expect.

“We’re going to work every single day in order to try to get the best out of our players, the best out of our staff,” said Guerra. “We're going to try to put together a team on the field that they can feel proud of, that they can feel identified when they watch play that that is a reflection of what our organization represents. … That’s the message that we’ll send, and we’ll go one training session at a time, one game at a time and hopefully when the end of the season comes, we add the points, and we’ll see where we are.”