TAMPA, Fla. – The USL Championship announced the Team of the Week for Week 24 of the 2022 regular season on Tuesday, with FC Tulsa goalkeeper Austin Wormell voted the Championship Player of the Week presented by Konami eFootball after posting a seven-save shutout that proved crucial in his side’s 1-0 victory against Indy Eleven that moved the club’s postseason chances forward.

With his side in need of a run of victories to try and close the gap to the playoff positions over the final quarter of the regular season, the Tulsa native delivered a stellar display for the hosts at ONEOK Field. Wormell came to the fore particularly in the second half, with his best stop of the night coming in the 65th minute as he denied Indy’s Justin Ingram from close range to keep the game scoreless before Machuca grabbed victory with a 90th-minute winner.

“This is a huge process for him, and I think he is standing firm,” said FC Tulsa interim Head Coach and former Jamaican international goalkeeper Donovan Ricketts. “I cannot give him enough credit, for being a kid his age and his lack of experience, to be playing like he’s been playing. … he grew up here – he grew up in the second half and he stood firm, and he kept us in the game.”

Wormell earned 47 percent of the ballot to claim the award. San Diego Loyal SC’s Charlie Adams and the LA Galaxy II’s Josh Drack finished tied for second on 18 percent after Adams notched a pair of assists in SD Loyal’s 3-1 victory on the road against El Paso Locomotive FC, and Drack capped a stellar display with a late free kick finish that earned Los Dos a 1-1 draw with the Charleston Battery. 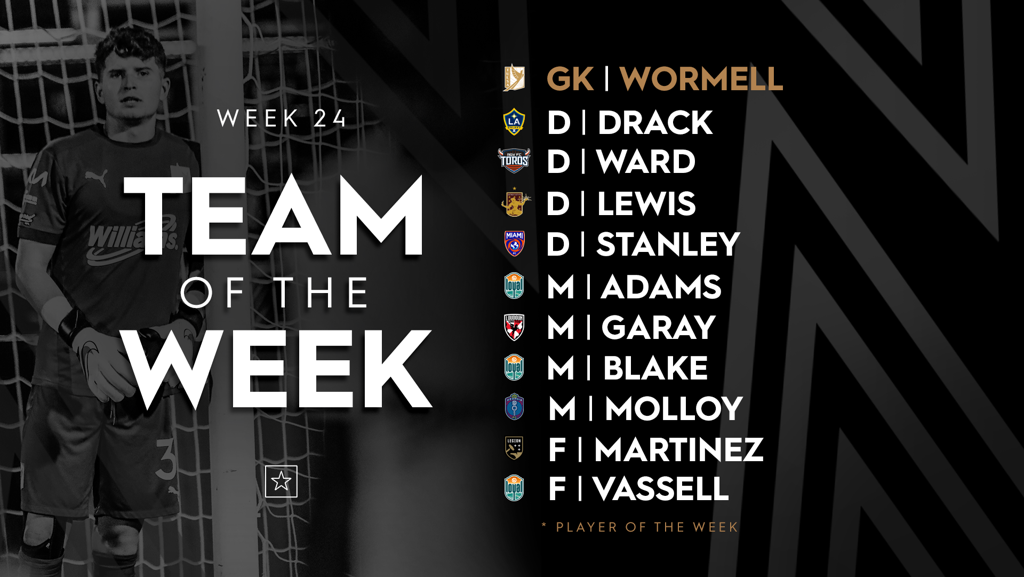 GK – Austin Wormell, FC Tulsa: The Tulsa native recorded a seven-save shutout – including a brilliant second half stop to keep the game scoreless – as FC Tulsa grabbed a crucial 1-0 victory against Indy Eleven to keep their playoff chances alive.

D – Josh Drack, LA Galaxy II: Drack scored a spectacular late equalizer to earn Los Dos a 1-1 draw with the Charleston Battery to cap a performance in which he completed 65 of 68 passes, had one chance created and won 10 of 13 duels defensively.

D – Akeem Ward, Rio Grande Valley FC: The left back scored the second goal for the Toros in their 2-2 draw on the road at San Antonio FC and defensively won 7 of 10 duels and 3 of 3 tackles while making five interceptions and eight recoveries.

D – Matt Lewis, Detroit City FC: The Michigan native scored the winner for Le Rouge in its midweek victory against Birmingham Legion FC and had a pair of stellar performances overall, recording 11 clearances and four interceptions while winning 16 of 23 duels and 9 of 12 aerial duels.

M – Charlie Adams, San Diego Loyal SC: Adams had a pair of assists and had nine chances created overall while completing 22 of 24 passes and winning 5 of 6 duels in SD Loyal’s 3-1 victory against El Paso Locomotive FC on Saturday night.

M – Jeremy Garay, Loudoun United FC: The 19-year-old had one goal and four chances created while completing 77 of 82 passes overall and winning 2 of 3 tackles in the center of the park as Loudoun defeated Atlanta United 2.

M – Jack Blake, San Diego Loyal SC: The English standout notched one assist and five chances created as part of an impressive all-around performance that saw him complete 18 of 20 passes, win 4 of 4 tackles and 5 of 7 duels and make 10 recoveries in SD Loyal’s 3-1 victory against El Paso Locomotive FC.

M – Aaron Molloy, Memphis 901 FC: Molloy recorded assists on both of Memphis’ goals in the side’s 2-0 victory on the road against New Mexico United on Wednesday night and had six chances created overall in two games while completing 93 of 116 passes and winning 15 of 27 duels.

F – Enzo Martinez, Birmingham Legion FC: The veteran forward recorded the insurance goal in Legion FC’s victory against Memphis 901 FC on Saturday night and had a positive week overall in two games, winning 9 of 17 duels and completing 37 of 58 passes to keep his side in the hunt for a top-four finish.

F – Kyle Vassell, San Diego Loyal SC: The former Northern Ireland international scored the opening goal in San Diego’s victory at El Paso Locomotive FC, had four shots overall, and completed 23 of 27 passes and 5 of 6 dribbles to prove a consistent threat in the attacking half of the field at Southwest University Park.