TAMPA, Fla. – The USL Championship announced the Team of the Week for Week 23 of the 2022 regular season on Tuesday, with El Paso Locomotive FC forward Luis Solignac voted the Championship Player of the Week presented by Konami eFootball after recording two goals and one assist in one of the wildest games of the Championship season so far, an eight-goal thriller against Colorado Springs Switchbacks FC on Friday night at Weidner Field.

Solignac was looking for his first goal since July 3 coming into the game, and after El Paso fell into a three-goal deficit inside the opening nine minutes on the road against the Switchbacks the Argentine led the fightback for the visitors. The veteran first set up Dylan Mares eight minutes into the second half before turning home the second for Locomotive FC in the 57th minute. After Mares added his second of the game eight minutes later, Solignac put the visitors ahead in the 67th minute, with a stoppage-time equalizer by the Switchbacks all that kept El Paso from a remarkable victory. 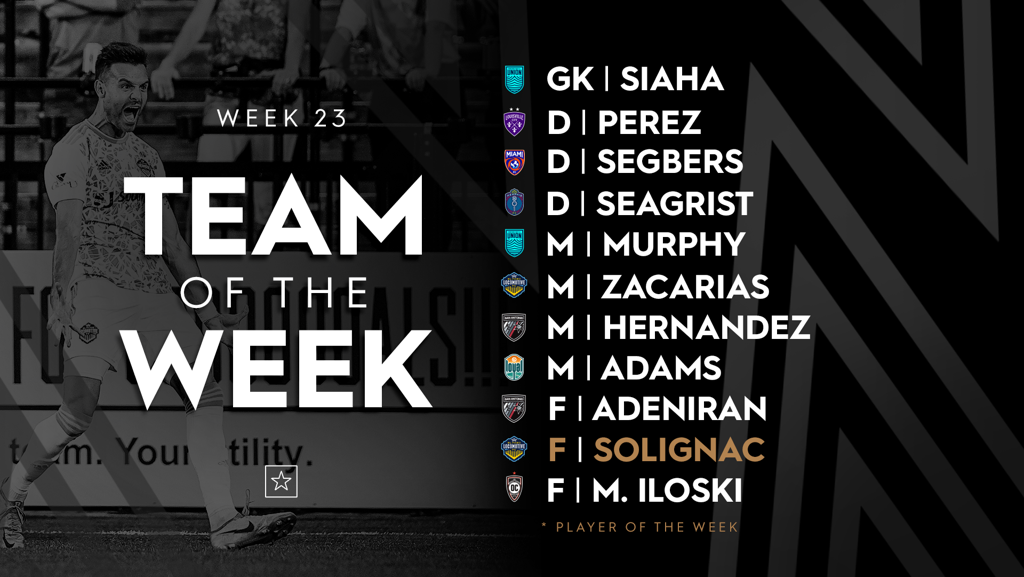 GK – Antony Siaha, Monterey Bay F.C.: Siaha recorded five saves across two contests, including a crucial save early in a 1-0 victory against Sacramento Republic FC on Saturday night, while conceding only a penalty kick against San Diego Loyal SC for an overall -1.63 Goals minus Expected Goals mark for the week.

D – Manny Perez, Louisville City FC: Perez played a key role in closing down the Tampa Bay Rowdies’ attack, winning 16 of 21 duels and 5 of 7 tackles and making 12 recoveries while completing 3 of 3 dribbles and 41 of 53 passes in LouCity’s 1-0 victory.

D – Mark Segbers, Miami FC: Segbers scored an early goal in Miami’s victory on the road against Atlanta United 2 on Saturday night and backed that up with a performance that saw him complete 57 of 65 passes and win 6 of 9 duels while making six recoveries.

M – Nicky Hernandez, San Antonio FC: Hernandez played a role in both goals of San Antonio’s 2-0 victory against Las Vegas Lights FC on Saturday night, including a highlight-reel strike to open the scoring, and recorded five chances created while completing 18 of 24 passes overall.

M – Charlie Adams, San Diego Loyal SC: Adams converted from the penalty spot for the only goal in SD Loyal’s 1-0 victory against Monterey Bay F.C. last Wednesday night and completed 39 of 42 passes while winning 3 of 3 duels to solidify the side’s second-place position in the Western Conference.

F – Samuel Adeniran, San Antonio FC: The Texas native scored both goals as SAFC took a 2-1 victory against Loudoun United FC on Wednesday night, including a standout finish from outside the penalty area, and had three chances created while completing 20 of 24 passes overall.

F – Milan Iloski, Orange County SC: The reigning Championship Player of the Month scored another pair of goals as OCSC took a 2-1 victory on Friday night against Phoenix Rising FC – moving to a league-high 18 this season – and had five shots overall while completing 33 of 44 passes.