TAMPA, Fla. – The USL Championship announced the Team of the Week for Week 22 of the 2022 regular season on Tuesday, with Sacramento Republic FC midfielder Rodrigo Lopez voted the Championship Player of the Week presented by Konami eFootball after notching a goal and two assists across a four-point week for the 2022 Lamar Hunt U.S. Open Cup Finalists that further solidified their position in the Western Conference playoff positions.

The Republic FC legend – who is currently tied for the most goals in the Open Cup this season – helped Sacramento rally for a 2-1 victory against New Mexico United with a pair of assists last Wednesday night at Isotopes Park, in turn reclaiming Republic FC’s all-time assists record while moving into fifth in the Championship’s all-time regular season list with 39 helpers for his career. Lopez then notched a late headed equalizer for his side in a 1-1 draw against Rio Grande Valley FC on Saturday night at Heart Health Park, extending the club’s current undefeated streak to four games and moving it within two points of the top four in the conference standings.

Lopez earned 36 percent of the ballot to claim the award. Birmingham Legion FC’s Enzo Martinez finished second on 29 percent after recording two goals and one assist in the Three Sparks’ 6-0 victory against Atlanta United 2 on Saturday night at Protective Stadium. 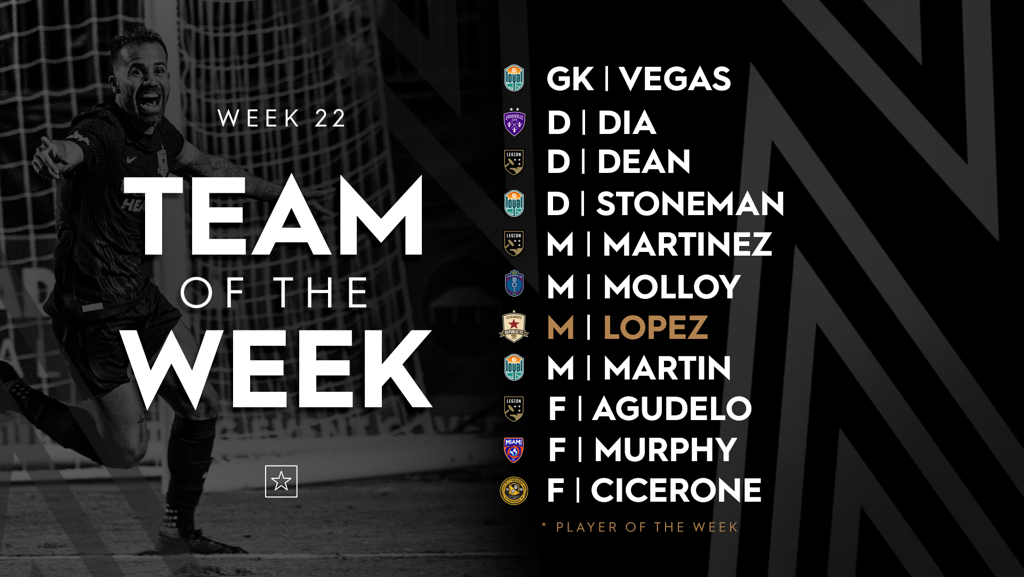 D – Amadou Dia, Louisville City FC: The left back notched a pair of assists to highlight a strong two-way performance that saw Dia record five chances created overall while completing 43 of 55 passes and winning 3 of 4 duels, 2 of 2 aerial duels, and make seven recoveries in a 4-1 win against Charleston.

D – Jonathan Dean, Birmingham Legion FC: Dean continued his stellar season with one assist and three chances created in Legion FC’s 6-0 win against Atlanta United 2 on Saturday night, while also winning 6 of 6 duels, 3 of 3 aerial duels and 2 of 3 tackles defensively.

D – Grant Stoneman, San Diego Loyal SC: Stoneman notched the second goal of the night for SD Loyal in its 3-0 victory against Western Conference leader San Antonio FC and made five clearances, six recoveries and completed 32 of 41 passes overall in the contest.

M – Aaron Molloy, Memphis 901 FC: Molloy guided Memphis to a six-point week with victories against the Red Bulls II and Hartford Athletic, recording one goal, two assists and 10 chances created while completing 101 of 120 passes, winning 17 of 21 duels and making seven interceptions and 21 recoveries for 901 FC.

M – Rodrigo Lopez, Sacramento Republic FC: Lopez notched both assists as Sacramento rallied for a 2-1 victory on the road against New Mexico United on Wednesday before scoring a late equalizer against Rio Grande Valley FC on Saturday, while completing 47 of 62 passes and making 15 recoveries across the two outings.

M – Collin Martin, San Diego Loyal SC: Martin had a stellar two-way performance in the center of the park in SD Loyal’s 3-0 win against San Antonio FC, completing 48 of 56 passes and notching two chances created while winning 10 of 14 duels and 4 of 6 tackles and recording 10 recoveries defensively.

F – Juan Agudelo, Birmingham Legion FC: The former United States international had one goal and two assists in Birmingham’s 6-0 victory against Atlanta United 2 on Saturday night, and completed 29 of 31 passes while winning 3 of 5 aerial duels.

F – Kyle Murphy, Miami FC: The veteran bagged a pair of goals to reach a half-century in the Championship’s regular season for his career and recorded four shots in leading Miami to an impressive 3-0 victory on the road against New Mexico United.

F – Russell Cicerone, Pittsburgh Riverhounds SC: Cicerone scored both goals as the Hounds took a 2-0 victory on the road against Indy Eleven on Saturday night and had four shots overall while completing 10 of 12 passes in Pittsburgh’s sixth win in its last seven outings.