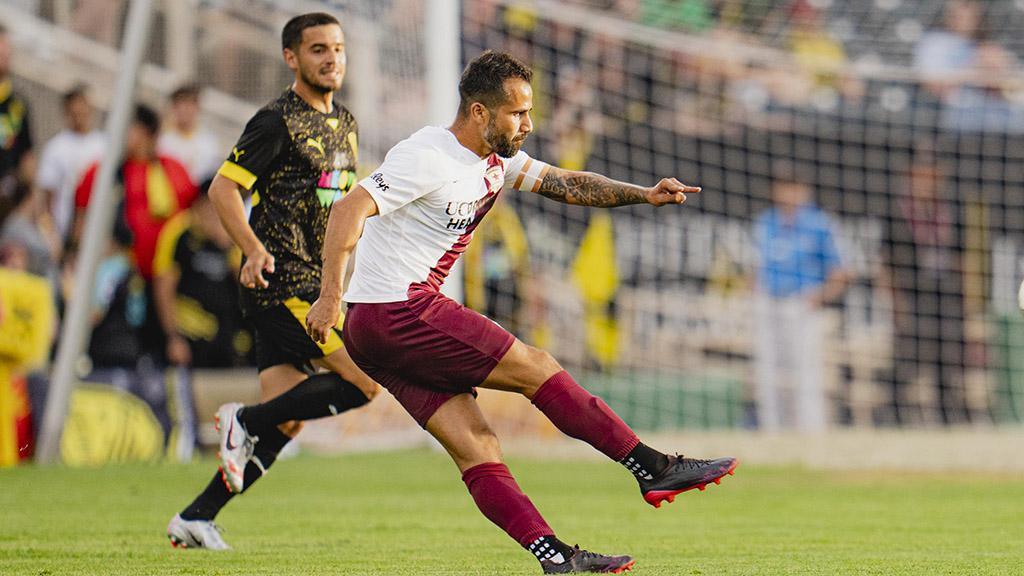 It’s the sort of thing that somehow doesn’t sound right.

And yet, it was true, at least before the veteran playmaker and club legend’s two-assist night against New Mexico United led the visitors to a 2-1 victory at Isotopes Park and moved Lopez ahead of former teammate and fellow club legend Cameron Iwasa for the crown.

In what’s already been a memorable season, it provided another moment for Lopez to enjoy.

“For me, it means a lot,” said Lopez. “I’ve never been a player that cares too much about individual awards or individual accomplishments. I’d rather lift a trophy at the end of the year and get wins, but to me, it’s just a reminder of all the hard work in the last few years.”

Lopez was, of course, the club’s leader in assists for a few years. Through the club’s first two campaigns, Lopez recorded 15 assists across the regular season and playoffs and earned MVP honors in the 2014 USL Championship Final. After departing at the end of 2015 to join Mexican club Celaya, he was first surpassed by Danny Barrera, who took his mantle as club playmaker, and then Iwasa, whose 58 goals across the regular season and playoffs for Republic FC remain the club’s all-time high.

After his much-anticipated return from that Mexican sojourn was cut short in the abbreviated 2020 season, and a year away at Rio Grande Valley FC last campaign, the 35-year-old’s third stint with the club has been a reminder of the form that led Republic FC to silverware at the end of its first season, and that this year has made the club the first from the lower divisions to reach the Lamar Hunt U.S. Open Cup Final since 2008.

“Since I’ve been back in Sacramento, it’s been my best year that I’ve played, the most fun I’ve had,” said Lopez. “It’s just a little reminder for me, and everyone around me that’s always helped me and pushed me. This is especially for them and for all my teammates and coaches who I've had here.”

Winning, though, still matters, especially on Wednesday night. Rallying to take victory against New Mexico on its home turf before a crowd of almost 10,000 fans was another sign of Sacramento’s togetherness. It was the first time since last August in which United had lost after scoring the opening goal, with Lopez’s assists setting up Keko and Douglas Martinez Jr. for goals four minutes apart around the hour-mark that turned the tide in the game.

The win moved Republic FC within two points of United for fourth place in the Western Conference while holding a game in hand, bringing the prospect of at least one home game to open the USL Championship Playoffs into view.

“When they scored their goal, you saw that desire,” said Republic FC Head Coach Mark Briggs. “You saw that hunger. You saw that indomitable spirit and the boys stepped it up, got a little bit of an extra yard in their step... a little bit more intensity in everything they did.”

Records are nice. For Lopez and his teammates, though, what happens at the end of the season matters more.

“Like I said, I’m very happy, but I’m more happy that we got the win,” said Lopez “I’m happy that we put ourselves in a good position in the league to build on, to climb that ladder going up in the standings.”